New York – Nick Cave: “Rescue” and “Made for Whites by Whites” at Jack Shainman Gallery Through October 11th, 2014 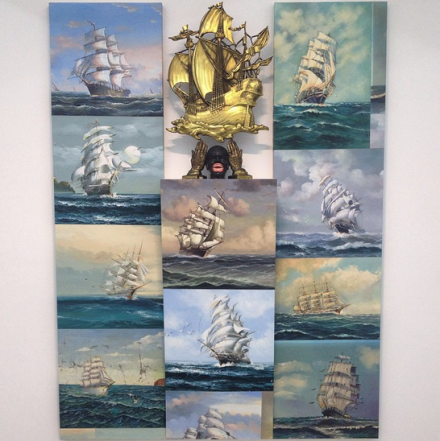 Nick Cave and Jack Shainman Gallery have opened a pair of shows this fall, spanning the gallery’s two Chelsea locations on 20th and 24th street locations. Separately titled as Rescue and Made for Whites by Whites, the exhibitions articulate the artist’s familiar thematic concerns, addressing racial impositions and how they are reflected in everyday consumer culture.  Cave delivers the prominent aspects of his practice, such as repurposing of found objects, assemblage of varying textures, and the performance of cultural rituals, with a somewhat stark hand, allowing a fierce critique to emerge from the works themselves. 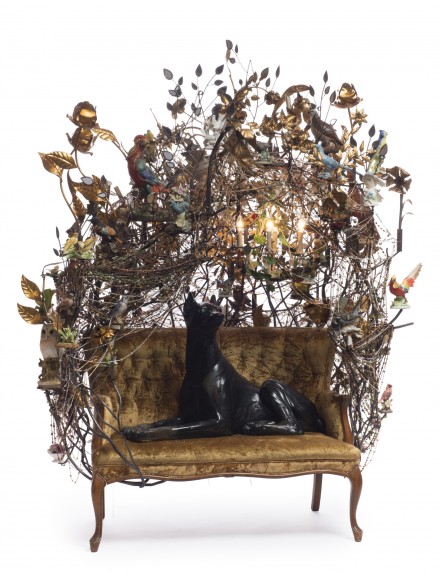 Rescue examines the methods of social prejudice and the depictions of sub-cultures while adopting kitsch as a metaphor.  Found and “rescued” ceramic dogs are placed on a variety of furniture, often covered or covering grotesque accumulations of natural material.  Undeniably excessive and outrageous in their appearances, these installations merge the common positive affirmations attached to dogs, such as fidelity, playfulness and unconditional love, with those applicable only to certain valuable and in demand breeds, such as intelligence, nobleness and elegance.  The dogs’ haughty looks and bizarre positioning work well against Cave’s morass of branches and leaves, underscoring their polished, aristocratic air against their wild origins.  Suggesting a hierarchal distinction among different breeds within the same species, Cave questions the set positive and negative presumptions attributed to social and racial groups. 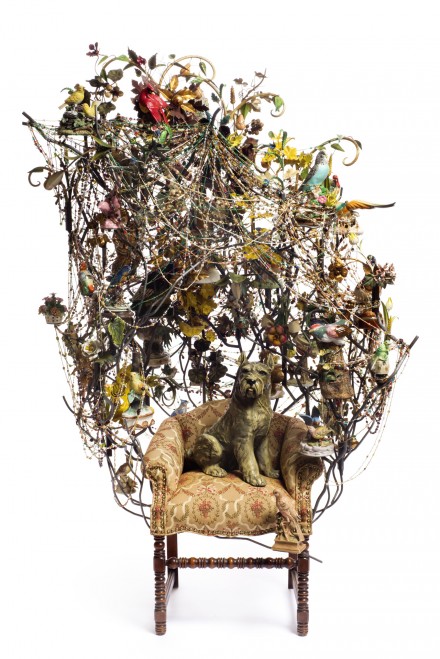 Made for Whites by Whites touches upon similar issues, and a concept closely tied to Rescue, but Cave here performs a relatively historical approach, again repurposing found objects to depict narratives on racial and social agendas. Seemingly random artifacts such as flowers, animals, Christian iconography, or other utilitarian tools such as stools or a comb embody what the artist translates as the history of racism and misjudgment evident throughout American history.  A spittoon designed in the form of a black man’s head gave the Chicago-based artist and musician the inspiration for this series when he saw this object at a flea market.  Appalled by the intense vulgarity of the object, the artist found a problematic connection between these once utilitarian (or simply decorative) objects and their contentious states. Striking as the narrators of a history, with their delinquents and complications, these mass produced collectibles hold on to their questionable tales while building an ensemble of theatrical banality. Cave, as an artist studying the social and historical flow of discriminative structures, mines the archive of everyday life and elevates the existing memorabilia to dismantle the racist compilation. 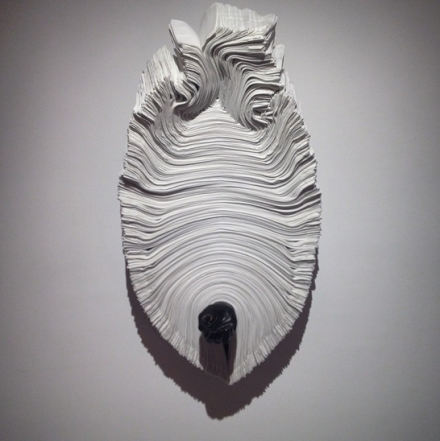 In this execution, Cave delves into artifacts likely to be relegated to the dust bin of history, and returns their offensive content to a prominent place.  There is no avoiding the works on view, no way to shy away from their vividly aggressive relegation of the black body to something for mockery and disdain.  By forcing the public to once again consider these artifacts and their status as tasteful objects at one point in American history, Cave lets the work speak volumes all on its own. 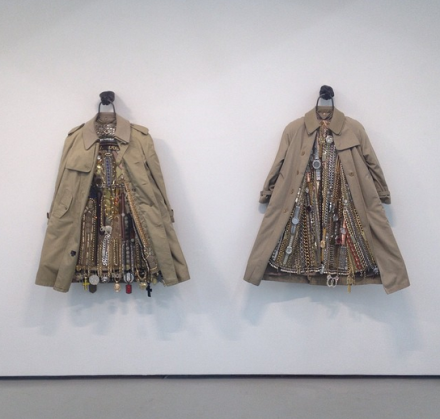 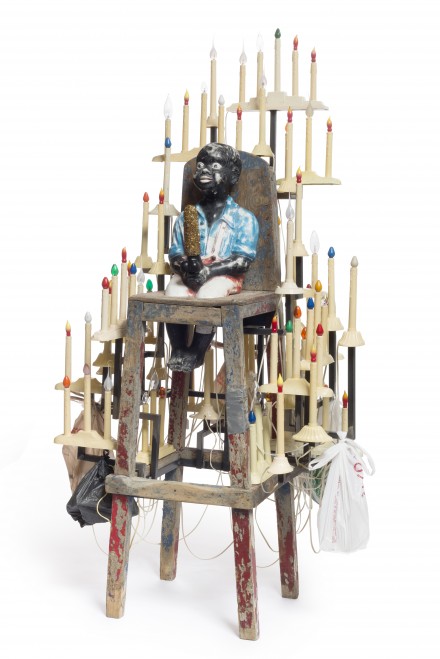 The spring of 2014 saw the opening of Jack Shainman Gallery’s new upstate outpost, The School, a former high school renovated into a multi-purpose project hub.  This thirty-thousand square foot space was introduced with a grand scale Nick Cave exhibition featuring his signature Soundsuits sculptures, along with a buoyant performance coinciding with the gallery’s 30th anniversary.

Nick Cave: Rescue and Made for Whites by Whites is on view at Jack Shainman Gallery through October 11, 2014. 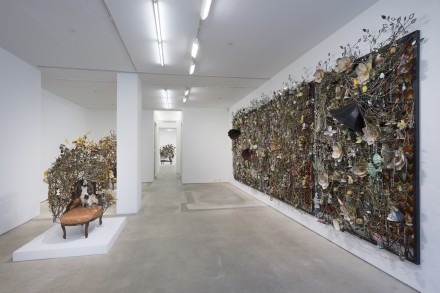 This entry was posted on Monday, October 6th, 2014 at 2:00 pm and is filed under Art News. You can follow any responses to this entry through the RSS 2.0 feed. You can leave a response, or trackback from your own site.