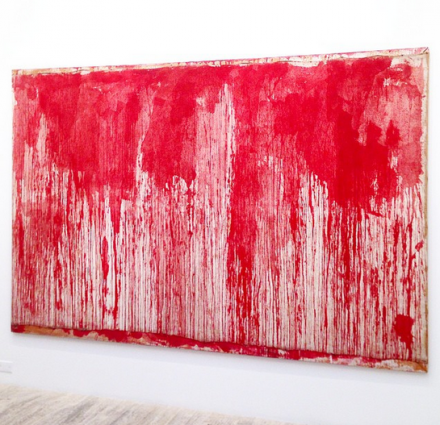 Hermann Nitsch,Kreuzwegstation (Station of the Cross) (1961) at Hauser and Wirth, via Art Observed

The Viennese Actionist movement was one of the more visceral post-war collectives that sprung up from the war-torn landscape of mid-20th Century Europe.  The group of Austrian artists (while claiming they were never affiliated officially), among them Otto Mühl, Günter Brus, and Rudolph Schwarzkogler, combined disturbing and often surreal imagery with a ritualistic approach to art making, creating elaborate pieces that often involved flayed animal carcasses, body parts, and bucket upon bucket of blood.

The Actionist’s actions are perhaps most interesting for their attempts to destroy the object-oriented market structure, creating pieces that not only defied easily commodified practice, but in turn rendered the works themselves conveyors of a violent shock to the viewer.  There is little space for reflective pondering before one of Hermann Nitsch’s bloody canvases, or Günter Brus’s disturbingly alien performance works.  Instead, one most confront an initially visceral state of aversion, confusion and occasionally outright disgust, countered by a certain empty (or perhaps cryptic) state of existence beyond the work itself.  The work often leaves little space for anything but shock and awe, for the intense visual impact of its stylistic decisions. 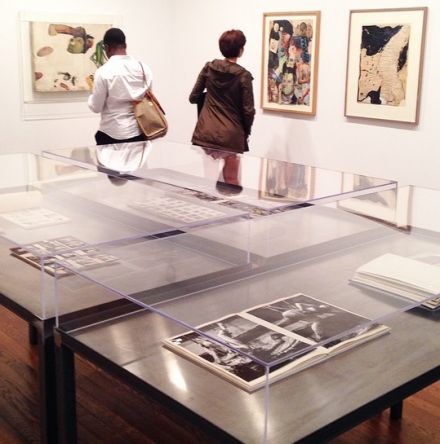 But the Actionists’ opposition to the art object as such is particularly interesting for this inability to avoid its own material substance.  Rather than pushing beyond a series of artistic implements into purely performative work, the artists often imbued the objects used with a sense of sacred utilitarianism, a set of objects given a sense of their own importance by inclusion in various performances and ritualistic pieces.  Even the photographic documentation of the works has a sense of exotic “otherness,” that makes them into a peculiar artifact of the movement.  As Mühl himself wrote in the updated version of the Material Manifesto in 1967 “Far more important than baking bread is the urge to take dough-beating to the extreme.”

It’s this sense of the “dough,” as such, that makes the work of these artist’s so remarkably potent.  While never eclipsing the production of the artwork proper in their practice, their works on view always seem to present some degree of their source as absent.  While the pair of canvases on the third floor certainly present a compelling minimalism, the works exhibit a certain logic to their construction that remains obscured by the materials and canvas itself.  Similarly, the nearby trough of burnt material begs the question of its purpose, the question of why the work was created.  Throughout, a sense of purpose is palpable, but defiantly held away from the works.

Rite of Passage is on view through October 25th.

This entry was posted on Wednesday, October 15th, 2014 at 1:24 am and is filed under Art News. You can follow any responses to this entry through the RSS 2.0 feed. You can leave a response, or trackback from your own site.