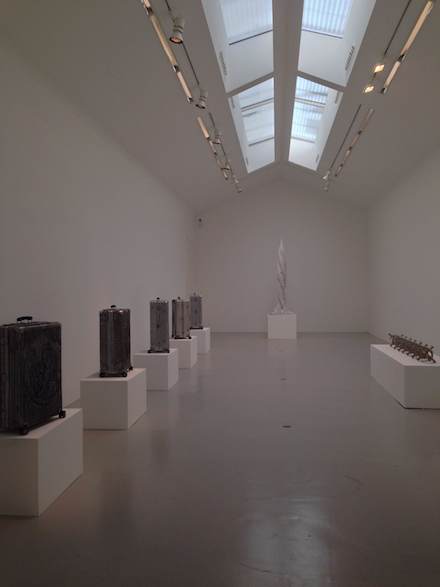 On view at Galerie Perrotin in Paris is a solo exhibition from Belgian neo-conceptual artist Wim Delvoye composed of around twenty new works that continue the artist’s ongoing interest in assemblages that constantly challenge assumptions of the sacred and profane.  While the show features some of Delvoye’s previously explored formats, the show also includes a number of new formats and practices. 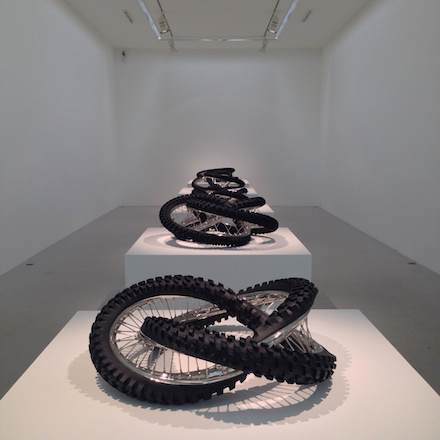 For this exhibition Delvoye draws on the sacred, culturally-weighted designs incorporated into gothic architecture, as well as 19th century sculpture, and combines it with his contemporary conceptual practice – reinterpreting historical themes and putting them into the context of modern, everyday objects.  Suppo (Karmanyaka) for example is a white marble sculpture in which the roots of a tree produce not foliage but rather a medieval-style tower, spiraling upwards like Brancusi’s Endless Column.  Rather than rely on the meticulous creation of the work as itself, Delvoye’s inversion makes much of the intersection of cultural and natural forms, examining the space between the two. 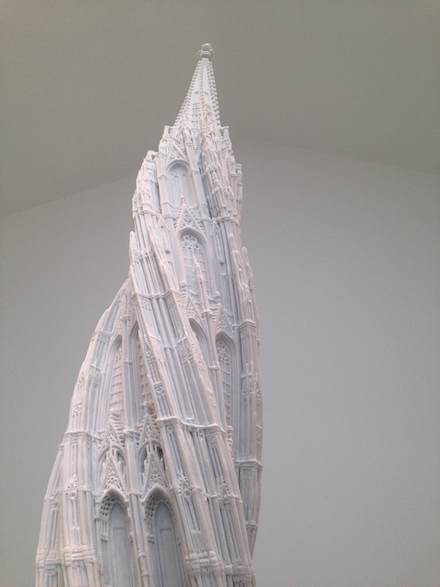 Along the same lines of religious iconography and architecture, Delvoye has shaped tires into shapes that resemble architectural features from religious buildings, twisting them into Gordian-like knots.  A familiar reference to medieval metaphors regarding the infinite, the pieces seem to carve out a space for the same appreciation in a modern discourse, despite the limitations of their own banal cultural moorings.  In a similar format, Delvoye is presenting one of his bent crucifixes, Double Helix Alternating Current 13cm x 15L,  a double-helix pattern questioning relationships between concepts of religion, science, and faith. 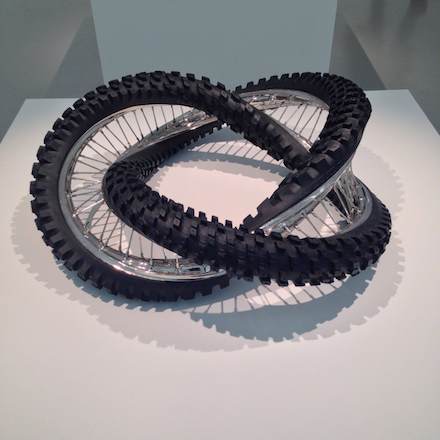 Similarly, a row of five aluminum suitcases have been intricately carved and embossed with Delvoye’s own coat of arms, as well as with patterns inspired by Persian miniature patterns, as if to symbolize “the nomad” as both a mystical concept and a contemporary state of existence.  Stuck between the space of spiritual ambiguity and the frequent-flyer mile culture of contemporary work and travel, the pieces seem to play on notions of wealth and class as a symbol of spiritual transcendence. 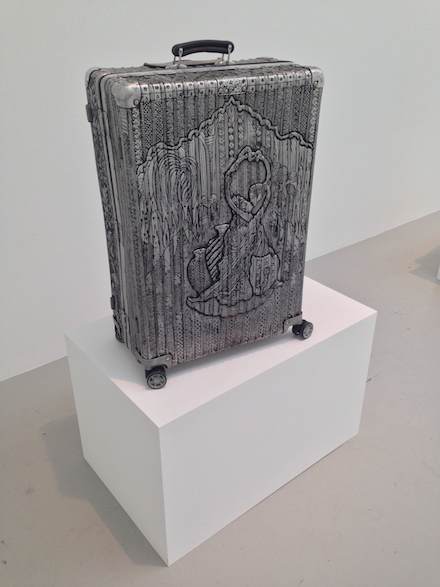 One of Wim Delvoye’s Carved Suitcases 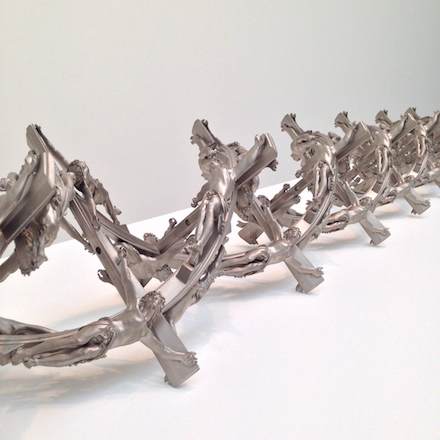 Born in 1965, Delvoye is best known for his “Cloaca” series, which sheds light on the digestive process through an immensely conceived exhibition piece. He has lived and worked in Belgium for most of his life, but recently moved to China after a court of law judged his pig tattoo art projects illegal. Delvoye works in a wide variety of mediums, and his works are often considered blasphemous by religious and political authorities.

The current exhibition will remain on view at Galerie Perrotin in Paris through October 31, 2014.

This entry was posted on Wednesday, October 29th, 2014 at 12:57 pm and is filed under Art News. You can follow any responses to this entry through the RSS 2.0 feed. You can leave a response, or trackback from your own site.