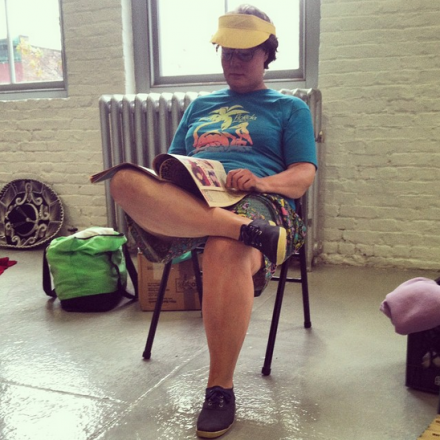 Duane Hanson at Karma, all photos via Art Observed

Spanning two separate weekends this November, the Independent Projects fair is an interesting take on the the art fair as an exhibition opportunity.  Rather than rely on an initial rush of collectors, the fair is spread out over two separate weekends, allowing collectors an initial crack at the works offered before they go on public view the next week.  Combining this with a small selection of forty galleries and exhibitors, the Projects fair offers a considerable opportunity to expand the concept and execution of the fair environment. 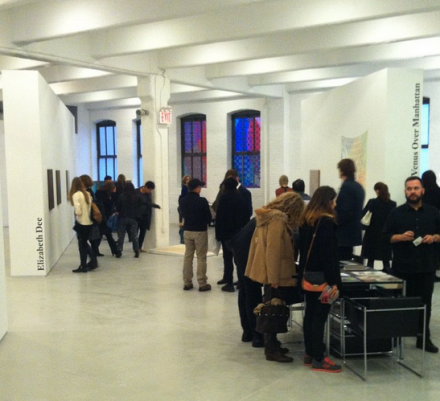 The strategy towards tight curation has worked well for The Independent in the past.  Its March event is always one of the stronger fixtures of Armory Week, with its tendency toward open air exhibition strategies and a well-picked series of galleries, publishers and partners.  Here, the idea seems to be directed towards a more exhibition-focused approach.    While the works are for sale, the fair also doubles as a series of single artist exhibitions, special works and installations that welcomes a more exploratory atmosphere for both gallerists and visitors.  A prime example is Karma’s Duane Hanson installation Flea Market Lady, which pairs the artist’s haunting sculptural realism with an expansive environment of clutter around the sculpture.  Obscuring the materiality of both his sculpture and its surroundings, the piece demands much more investment than the average fair booth. 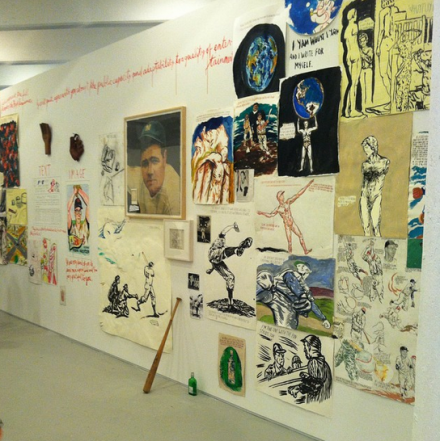 It’s an interesting play in general for the smaller fair, capitalizing on the downtime between auctions in New York with an open-ended format that allows open exploration and a series of projects from a diverse set of galleries.  One floor below, Skarstedt Gallery is showing an impressive series of Mike Kelley banners, pieces that saw that artist branching out from his early abject banners into craft-based works and obscure iconographies.  The works are an interesting link between Kelley’s sewn fabric toy works and his earlier abject text works, and provide a strong look at the artist’s impact outside of his most common pieces. 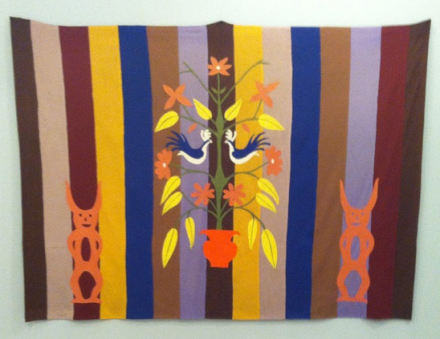 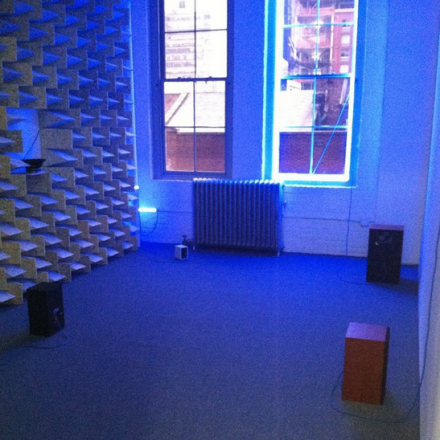 The fair also rewards a certain adventurous spirit and lighthearted playfulness that occasionally is drowned out at larger events.  In one corner, Lisson presents a Haroon Mirza sound sculpture, which uses blue neons, sine waves and acoustic treatment to create a spatial and sonic choreography that constantly subverts the viewer’s awareness of the space around them.  Across the room, Croy Nielsen is presenting the work of Hana Beier, enormous alcohol glasses mounted on comical pink blocks, a strange combination of consumer kitsch and luxury signifiers. 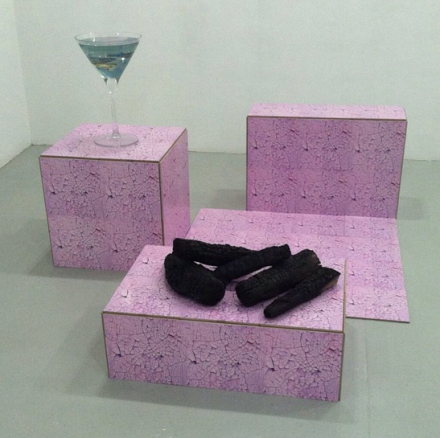 Other highlights include Yves Klein works on view at Dominique Lévy, as well as a series of Raymond Pettibon drawings and installations on view at David Zwirner, a space which ultimate consists of a pair of parallel walls, which the artist has fully covered with paintings, drawings, and even a few found objects (including a baseball and glass of gin set respectfully beneath a portrait of Babe Ruth).  Also of note is the series of bizarre objects by Yngve Holen on view at Galerie Neu.  Combining marble sculptures closely resembling slabs of meat and a pair of automobile bumpers covered in pigeon-spikes, the minimal booth setup is disturbingly forceful, a dark moment of reflection in the midst of the fair.

The fair will continue throughout the weekend, and will open again to the public from November 10th through the 15th. 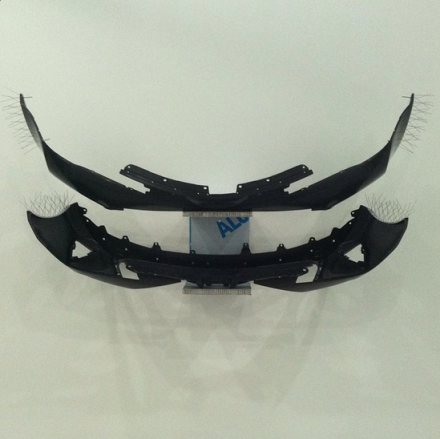 This entry was posted on Saturday, November 8th, 2014 at 2:57 pm and is filed under Art News. You can follow any responses to this entry through the RSS 2.0 feed. You can leave a response, or trackback from your own site.