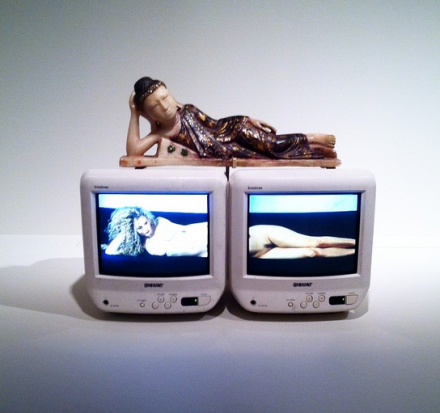 Nam June Paik’s ongoing retrospective, Becoming Robot at the Asia Society is considerably minimal in execution.  The exhibition takes up only a few small rooms in the uptown museum, including a full room dedicated to his (color feedback work) and another dedicated to his continued collaborations with cellist Charlotte Moorman.  But the selection of works on view make up for their spare arrangement with their depth and multi-textual possibilities, not to mention their strong correlations to the tech-centered art of the present day. 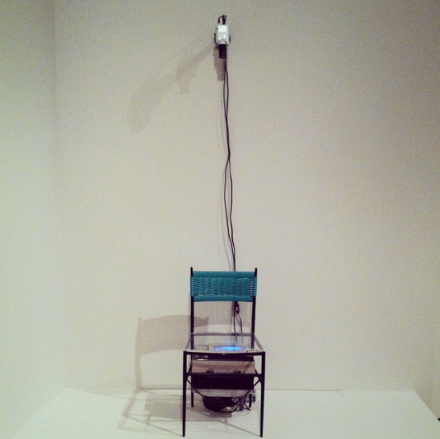 For the uninitiated, Paik was one of the more esoteric figures of the Fluxus movement, creating situational installations, objects and performances that invited new potentials for technology and formal interactivity into the conceptual practices of the 1960’s.  Paik’s enthusiasm in particular towards television broadcasting, portable cameras, sound recording and robotics opened new realms of art perception and phenomenological inquiry for his viewers and critics, but his work would often extend outward into his own, peculiarly utopian ideals, concepts of expression that would span the globe. 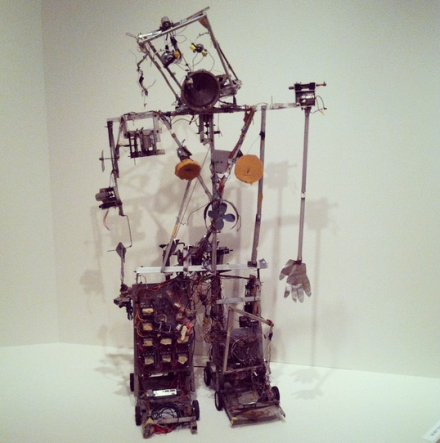 These ideals work themselves into the fabric of the exhibition throughout, taking form as works of static objects imbued with more fluid media elements (TV Chair and his early Robots), embellished media objects (his moving television paintings), or even functional robots like the hermaphroditic Robot K-456.  In each, Paik pushes the human form into a more tight engagement with the cybernetic, either by confounding arrangements of wires, images and spaces, or by pressing moments of acute linguistic breakdown. 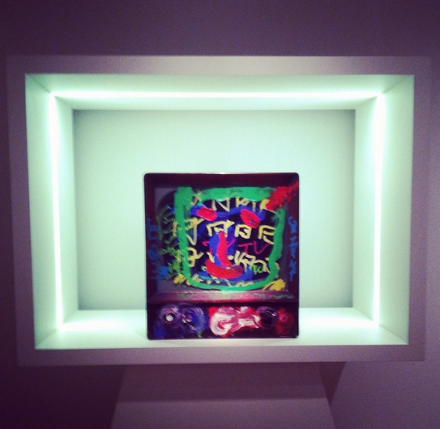 These attempts are most vividly seen in Good Morning Mr. Orwell, Paik’s live broadcast from The Kitchen in 1984.  Featuring performance art, musical acts and manipulated video segments, the film is equal parts document of New York’s thriving conceptual arts and literary scene (an appearance by poet Allen Ginsberg is particularly compelling), as much as it is an invitation towards viewers are the world to participate in the spectatorship of its physical location.  It’s this positivity of image, of the possibility to spread challenging, forward-thinking art projects around the country through the frameworks of “massified” media fully underlines the populist notions of Paik’s work, and his insistent belief in the capabilities for his clusters and clumps of circuits, wires and displays. 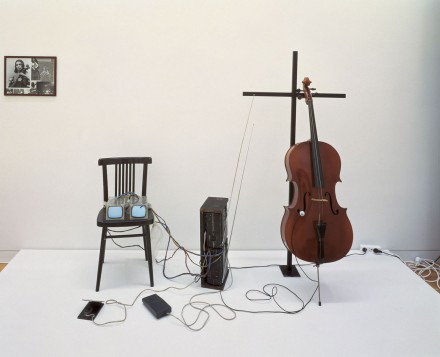 As the viewer continues through the exhibition, from his impressive colored feedback project, which generates a bizarre interaction with the space through a series of overlaid projections and closed-circuit TV cameras to his placid-faced robot sculptures, the objects on view move from indecipherable masses of equipment to an attempt at recognition, of bringing the object and the image more closely into the realm of expression and understanding.  Bringing the viewer on screen, bringing them into the visual equation through household media, Paik’s project gets its due here, moving beyond the rote distractions of modern media towards a vision of the limitless extensions of the human body through its most accessible technologies.

Becoming Robot is on view through January 4th. 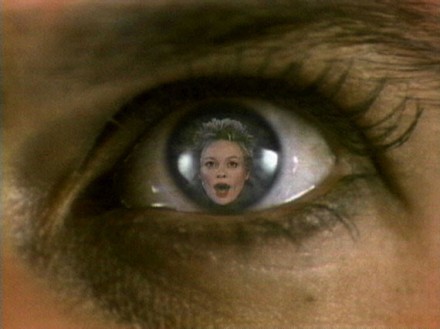 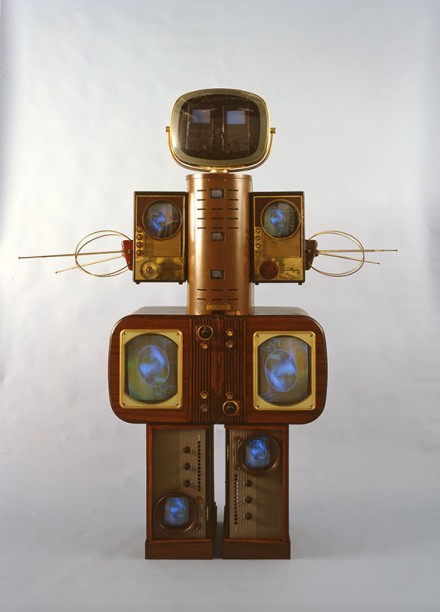 This entry was posted on Tuesday, November 4th, 2014 at 12:00 am and is filed under Art News. You can follow any responses to this entry through the RSS 2.0 feed. You can leave a response, or trackback from your own site.