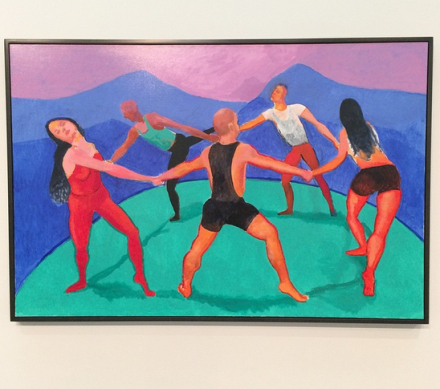 David Hockney’s new exhibition of paintings at Pace Gallery, his first full-size canvases since 2009, are a fitting continuation of the artist’s current interests, combining vaguely abstract environments and poses with a subtly loaded series of juxtapositions. The exhibition, which closes this Saturday, sees Hockney returning from several years focused on landscape studies and experimentations in digital video and photography to portraiture and human subjects. 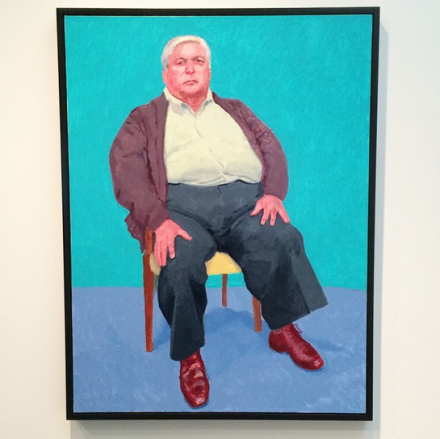 There’s a certain indeterminate modernity to the works on view, a sense of contemporary social relations and interactions that escape immediate classification. Hockney’s figures seem recognizable in their poses and conversational forms, but their abstract grounding pulls them outside of a quickly recognizable mooring. 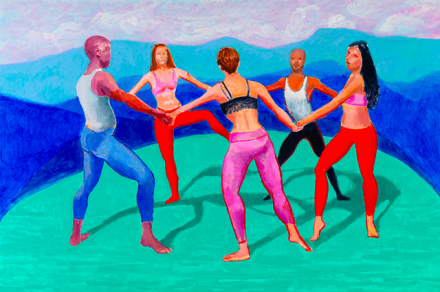 At the center of the show are a series of compositions showing men and women in non-descript scenes and elusively surreal arrangements, often engaged in conversation or placed in peculiar juxtapositions and positions. Men converse in empty, blue-tiled rooms, paired off in groups of two and three, events that seem stuck somewhere between a community meeting, artist’s studio visit or gallery opening. In others, Hockney directly references Matisse’s The Dance, converting the painter’s bacchanalian subjects into a series of subjects clad in loosely billowing cloth and yoga wear. 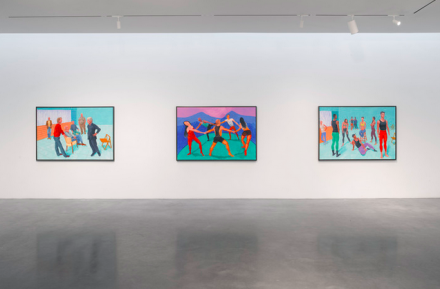 Hockney has also elected to show a series of digitally manipulated works, collaged images and photographs that follow a similar tack to his canvases, albeit with a more distinct, polished finish. In these, the artist twists and manipulates simple details, filling one composition with manipulated copies of a chair, allowing the work to lean more distinctly on its surrealist tendencies. The landscapes are once again somewhat noncommittal, refusing simple classification or placement. 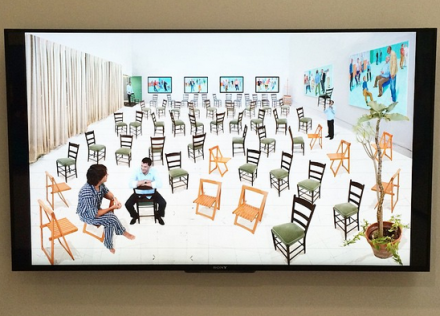 Considering recent interviews in which Hockney has discussed his fading hearing and resultant withdrawal from extended company and conversation, his approach to social dynamics is particularly interesting here, painted from a perspective where the context and content is, to a degree, irrelevant. Rather, Hockney seems fascinated with the gestures of themselves that come with conversation, the actual physical positioning and body language that springs from human engagement.

Hockney’s show of new work is on view through January 10th. 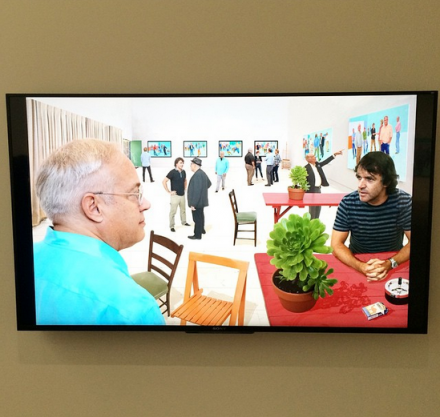 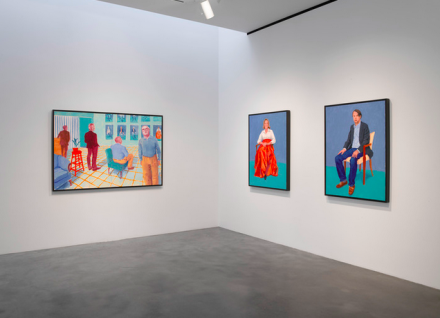 This entry was posted on Friday, January 9th, 2015 at 2:07 pm and is filed under Art News, Featured Post, Show. You can follow any responses to this entry through the RSS 2.0 feed. You can leave a response, or trackback from your own site.