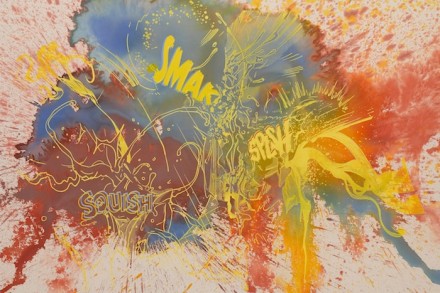 In his most recent  solo exhibition at the White Cube Bermondsey space, Christian Marclay presents a number of new works exploring the connection between image and sound, performance and artifact. From static onomatopoeias screen printed on canvas, to words racing around a video projection, to live performances within the gallery, Marclay explores the role of sound in art from numerous perspectives and forms, particularly in how they translate from one medium to the next. 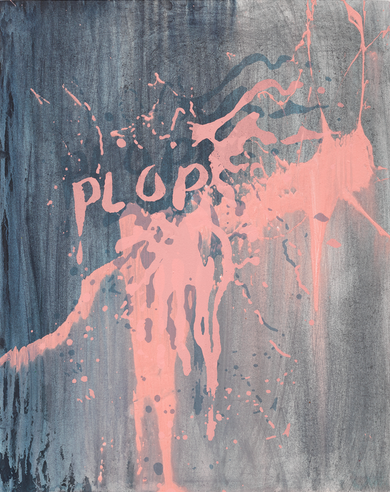 Two series of works on view here lay at the intersection of the distinct styles of pop art and abstract expressionism, calling to mind the splashes and drips of Jackson Pollack and the Benday dots and comic-book appropriations of Roy Lichtenstein. The series of smaller artworks in the 9 x 9 x 9 gallery have one onomatopoeic word each—”plop,” “splish,” “glop”— each reflecting the sound of paint being applied to the paper. The methods Marclay used to create the works also reflects the two disparate art styles: painting overlaid with screen printing. The larger works of the Action series create a mimicry of synesthetic sensation, with the words appearing to carry out actions on their static canvasses, from “blubbing” through an aquatic scene to “thwumping” against the corner of the frame. 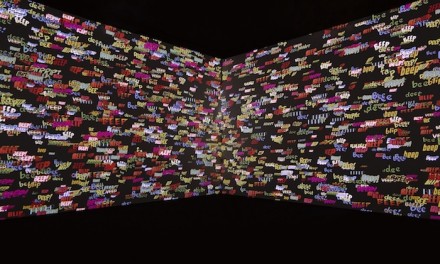 In Surround Sounds, Marclay further explores the impact of onomatopoeia through the medium of video, which allows the artist to bring motion to the words. Each utterance appears and travels around the room in a manner that reflects the sound it describes. Even in complete silence, the impression of sound can be overwhelming, as “Pop!” pops up on the walls in colorful font surrounded by bubbles, later transitioning into the impression of noisy traffic in the beeps, brrrps, and deets that crowd the walls. The words flash and zoom, colliding on a black background and ultimately producing a remarkably similar effect as if the piece had been accompanied by the actual sounds themselves. 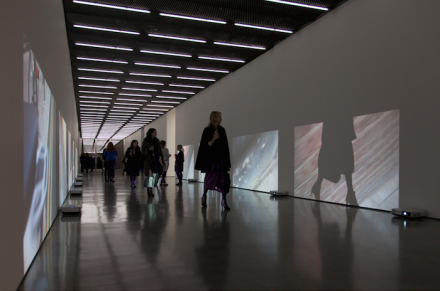 In another video installation, Pub Crawl, the audience is given the sounds they had been deprived of in Surround Sounds. Here, Marclay has compiled footage of his morning strolls through London’s East End in search of discarded empties from the night before. The rattling of kicked cans, crunching of crushed glass, and the light tinkling drawn out from tapping bottles and glasses with his silver pen create a soothing soundtrack as the audience walks down the hallway.  Casting shadows on the video projections, the viewers temporarily become a part of the installation, filling the streets Marclay walks with their own shadows. 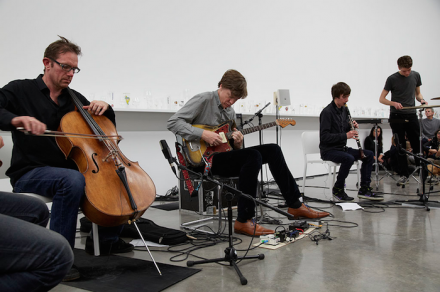 In another room, an numerous mismatched glasses like those in Pub Crawl line shelves that wrap around the room at the same level as a bar. Throughout the exhibition, weekly performances take place here with various musicians, including Sonic Youth’s Thurston Moore and saxophonist John Butcher. During some performances, the glasses, which are filled with water to various levels, resonate in the background, allowing the performer to interact with the space in unusual ways. 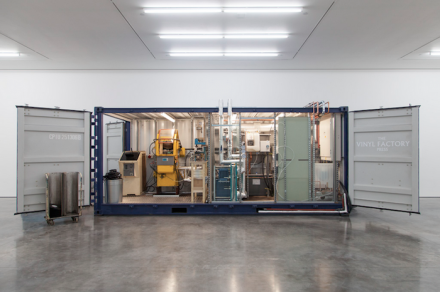 These weekly performances are all recorded live and manufactured on-site by the Vinyl Factory, while Coriander Studio creates screen prints in another area of the gallery for the album covers. The entire process of recording the performances, cutting and pressing the record, and printing the sleeve can be witnessed live.

This entry was posted on Wednesday, February 18th, 2015 at 12:00 am and is filed under Art News, Featured Post, Show. You can follow any responses to this entry through the RSS 2.0 feed. You can leave a response, or trackback from your own site.