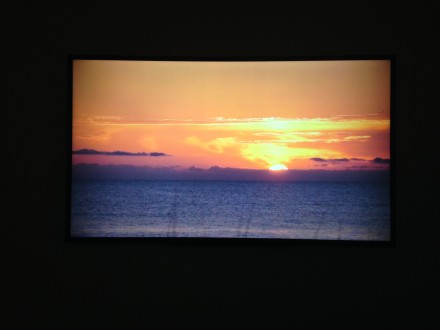 Charles Atlas, Terri’s Option (2015), all images are by Osman Can Yerebakan for Art Observed

Luhring Augustine is currently presenting The Waning of Justice, the gallery’s second collaboration with the pioneer video and sound artist Charles Atlas, following 2012’s The Illusion of Democracy at the gallery’s Bushwick location.  One of the foremost experimentalists in multimedia, Atlas has pushed the limits of time-based art arguably more than any other artist, challenging the ephemeral natures of both performance and dance incorporated alongside his video work. In doing so, Atlas, not a performer himself per se, has collaborated with legendary names such as Leigh Bowery, Douglas Dunn, Michael Clark and most famously Merce Cunningham, whose partnership with Atlas resulted in video documentations of the late artist’s illustrious performances at levels that adopt further conceptual and contextual levels through Atlas’s frame. 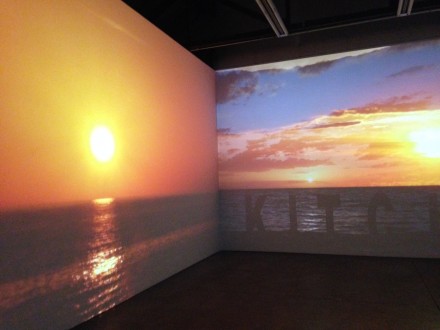 On display at Luhring Augustine are videos of sunsets Atlas recorded during his stay at the Rauschenberg Residency in Florida. Accompanied by overlapping images and sound sets by London based musician Luke Younger, aka Helm, these videos are projected onto the gallery walls, asking the viewers’ full submission to hallucinatory presence of the sun setting. The sharp of tones of red, yellow and orange in these footages utterly surround the interior, building a simultaneously calming and heightened experience within the gallery space. 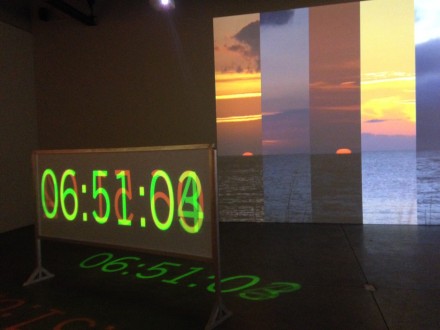 Atlas’ long-term interest in reassigning the border as a space for exploration in various mediums art is clearly noticeable in these pieces, which, at their core, are videos extended outwards towards more ‘immediate’ practices in sound art, installation and photography.  The artist’s capturing of the sunset proceeds through multiple mediums to replicate an aura that only its own physicality could orchestrate.

The correlation between the waning of the sun and the waning of justice furthers Atlas’ commentary on the vanishing of social, political and legal justice.  Here she is…v1, a single channel video installation of infamous drag queen Lady Bunny consolidates the argument.  In this 24-minute long video, the renown downtown star is giving a monologue, or ‘ranting’ in Bunny’s own words, to Atlas’ camera on social injustice and the distribution of privileges in the US. Parts that are unexpectedly muted gives the audience the tranquility to contemplate Bunny’s remarks on these critical, commonly argued topics.  The video delivers a bursting charge through Bunny’s extravagant persona and the severity of her subject matter, not to mention the inclusion of two of Bunny’s stage songs along with her glamorous attire.

Charles Atlas: The Waning of Justice Is On View at Luhring Augustine Through March 14th, 2015. 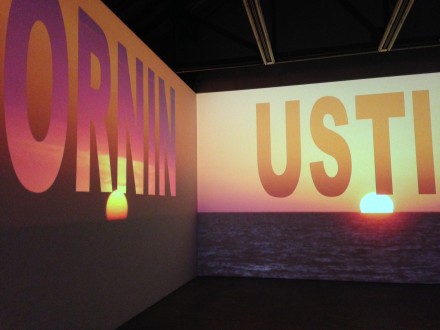 This entry was posted on Tuesday, March 10th, 2015 at 12:00 am and is filed under Art News, Featured Post, Show. You can follow any responses to this entry through the RSS 2.0 feed. You can leave a response, or trackback from your own site.