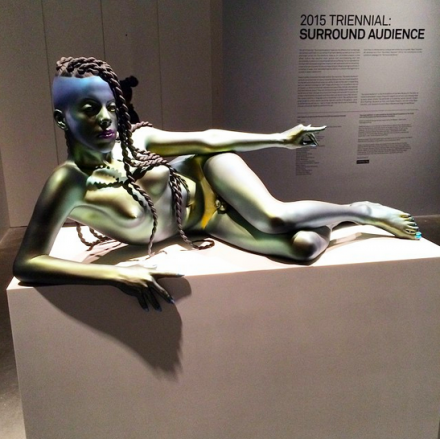 If the New Museum Triennial is to be believed, 2015 might in fact be the year that artists put the pervasive notions of “cyber-dread” to death in the contemporary discourse.  Curated by Ryan Trecartin and New Museum Curator (and former Rhizome head) Lauren Cornell, the exhibition combines aspirational commodities, linguistic play and digital microcosms into a fascinatingly deep exhibition, one that feels particularly appropriate as the 21st century turns 15. 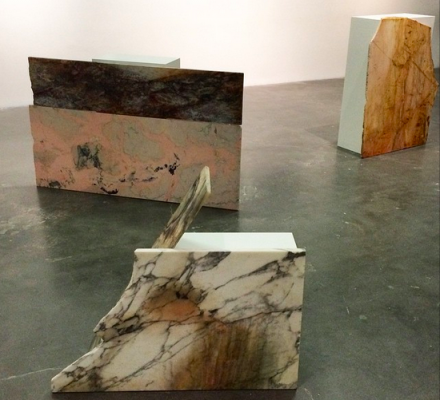 Trecartin’s particular blend of digital maximalism was jarring by nearly all accounts when it first breached the art world over ten years ago, but as his breakneck editing and hyper-commodified landscapes gained a certain degree of palatability in recent years, so too did the work of his contemporaries: the Dis collective, poet/artist Juliana Huxtable, critic and writer Brian Droitcour, and a range of other artists in the orbit of the downtown New York art community, each of whom took their own respective viewpoints on the development and embrace of contemporary life within hyper-mediated spaces. 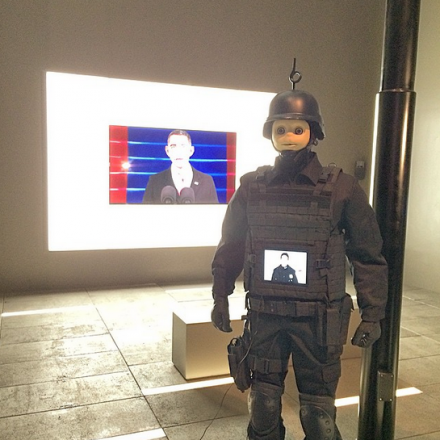 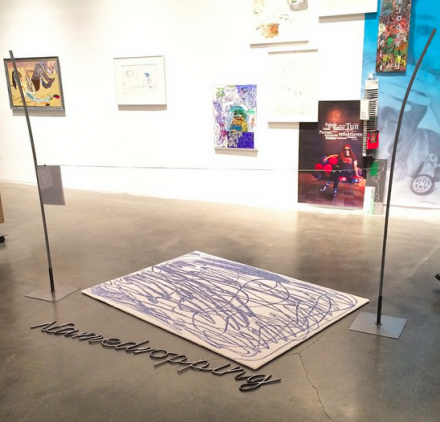 The Triennial, as a result, feels like something of a victory lap, a recognition of their particular approach to capital and consumption in the millennial era.  Throughout, mechanisms of production are bound up with their distribution and practical use, or perhaps vice versa, as illustrated in the marketing and social media campaign devised by K-Hole, including a selection of social media “stickers” users are invited to adorn Instagram photos and share, and a lighthearted poster series with phrases like “I’ll Triennial Once,” that invites publicity as a space of play and innovation. 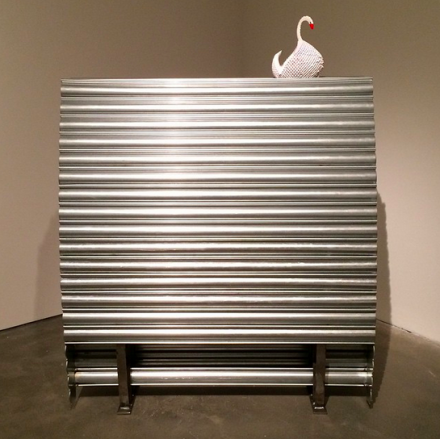 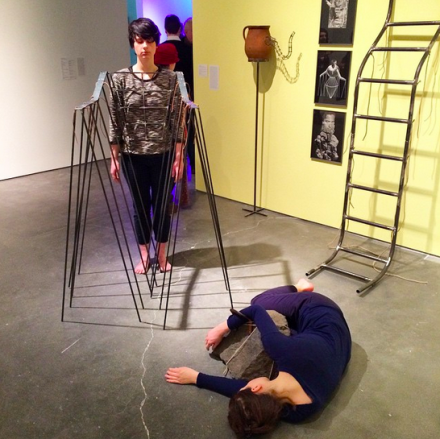 A certain sense of generative practice sits at the heart of much of the work, embracing new modes of expression within older forms as a point of departure.  One highlight is the dizzying glow of Antoine Catala’s Distant Feel, a new emoticon and website platform developed by the artist as a method to express empathy online (expressed as “E3″).  Placed in a tank, the immense scuptural rendering of the icon is used to grow coral and other sea-life, a space for the maintenance and sustenance of new life within the cold linguistic confines of the digital.  On the ground floor, Dis has produced a gleaming horizontal shower/fountain, complete with a beverage tap, in which a performer lies down, inside its clean lines, fully clothed, while enjoying what appears to be a mint julep from.  The sheer excess of the work walks a fine line between critique and fetish. One wonders if the object merely pushes luxury beyond practicality, assuming the role of art object, or if is this goal merely propels it to a new level of commodity capitalism.  Several floors up, artist Lawrence Abu Hamdan has created a sonic environment exploring the critical noise pollution of Cairo, where cabs, bustling markets and mosque sound systems have created one of the most densely sonorous spaces in the world. 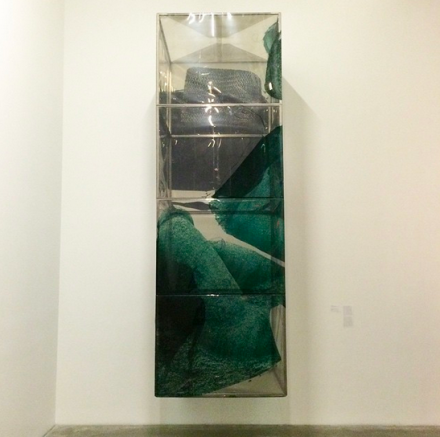 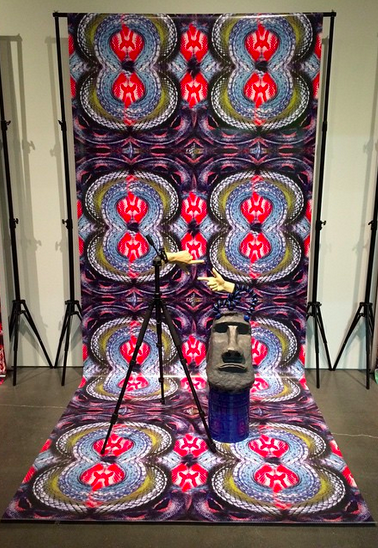 In other works, this same sense of playfulness and exploration turns its eye towards the archive.  The work of Eva Kotatkova, for instance, places performers among a selection of sculptures that vaguely reference early twentieth century surrealism, but are placed into interactions with a pair of performers, turning their intersections into a constantly shifting relationship with the works’ own historical references.  On the fourth floor, spatial intrusions by José Léon Cerrillo, Verena Dengler and Tania Pérez Córdova interact to create a drastically reformatted flow of movement, utilizing pop imagery and familiar sculptural forms to reformat the space of the museum as one of physical encounter.  Close by, Oliver Laric’s hypnotic video, depicting copied transformations of characters in varied animated television programs worldwide, proved an early favorite, inviting meditations on the structure and definition of bodies in media representation, and the willful desire for fluidity among them. 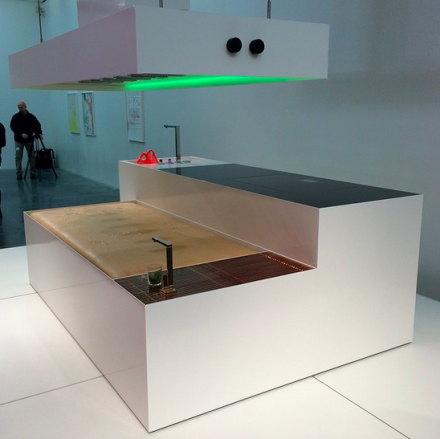 Yet the exhibition doesn’t shy away from the darker corners of digital modernity, either.  In the ground floor gallery, bitingly close to Dis’s aforementioned installation is Consumption, Chinese artist Li Liao’s performance work in which he assumed a position at a Foxconn-operated plant, creating components for iPhones and iPads, finally saving up enough after 45 days to buy an iPad himself.  The sheer scale of labor to merely own this icon of digital consumption is sobering.  But for sheer shock, few works can escape Josh Kline’s Freedom, a dystopian environment populated by shock troop mannequins, all masked with the faces of Teletubbies.  Nearby, the artist’s face-mapped performance as Barack Obama features a speech the artist longed for the president to give during his tenure, decrying corporate greed and calling for citizens to take back their government. 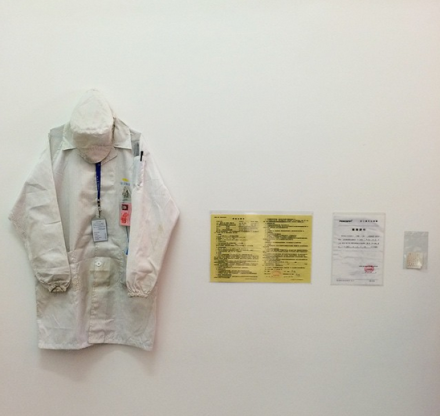 At times sprawling and surreal, at others powerfully concise, the New Museum’s current exhibition is a deep look at a disparate series of practices, united by material and political concerns that gradually emerge throughout the show’s five floors.  Almost impossible to properly summarize, the Triennial takes the polymorphic formats of digital circulation and places them into a free-flowing exchange, one which shifts from every perspective.

Surround Audience is on view through May 24th. 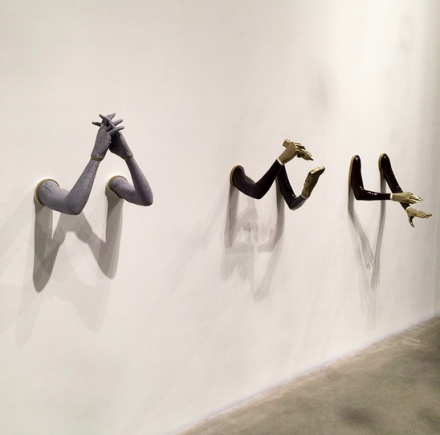 This entry was posted on Tuesday, March 3rd, 2015 at 4:04 pm and is filed under Art News, Featured Post, Show. You can follow any responses to this entry through the RSS 2.0 feed. You can leave a response, or trackback from your own site.