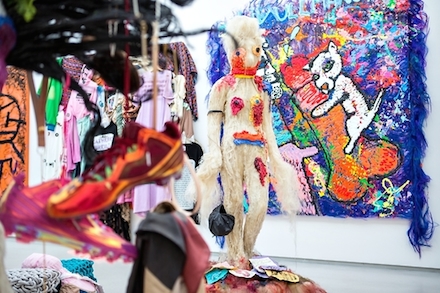 On view at Galerie Thaddaeus Ropac’s location in the Parisian neighborhood of Marais is the first solo exhibition from the controversial, yet highly respected Norwegian painter Bjarne Melgaard. Entitled The Casual Pleasure of Disappointment, The exhibition is a collaborative effort confronting themes inspired by French film director Catherine Breillat.  Known for confronting taboos and shocking audiences into self-reflection, Melgaard takes his cues for his new exhibition exhibition from Breillat, whom he has elevated to the role of a mythical figure. The works in this exhibition center around the 2014 film Abuse of Weakness, and take a shared interest in the beauty industry’s manipulation and domination of perceptions and judgments of others as a generator of profit and cultural currency. 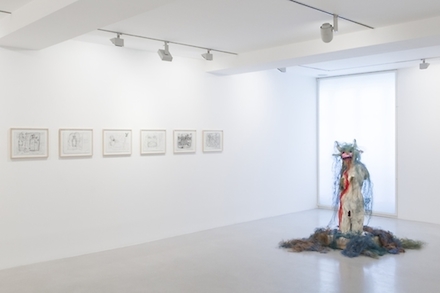 Bjarne Melgaard was born in Sydney and raised in Norway, studied in the Netherlands, and currently lives and works in New York. He first became known for his work involving references to subversive subcultures like heavy metal and S&M, and has recently embraced an approach tending towards sprawling environmental projects that center around certain focal points and cultural icons.  In this case, Melgaard has turned to Breillat, whose films often focus on themes of abuse, dependency, and deterioration of the physical appearance, and Melgaard places each into play in combination with his own personal histories, fashion collaborators and inspirations to create a swirling, colorful body of work that is at turns disturbing, florid and obsessive. 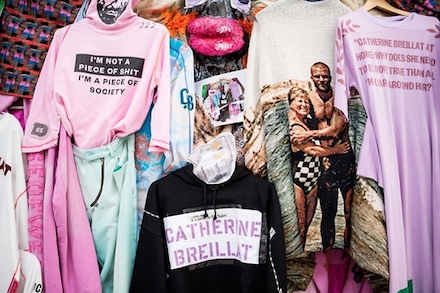 Collaborating artists include hair artist Bob Recine, fashion designer Andre Walker, furniture designer Kwangho Lee, make-up artist Kanako Takase, and artist Susan Cianciolo. The exhibition is made up of various artworks that orbit Breillat’s presence in the exhibition, including canvases adorned with paint and makeup, and other bizarre assemblages created by his fellow collaborators. Melgaard would make drawings and then hand them over to other artists to add their touches to the works, allowing various elements of his style to take on new life in others’ hands. 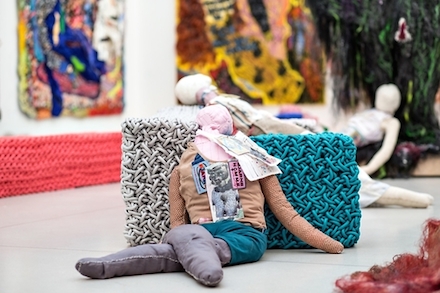 In effect, the works are meant to express themes of deceit, extortion, emotion, desire, dominance, and vulnerability. Melgaard is also launching a clothing line in collaboration with creative director Babak Radboy of the fashion line TELFAR, composed of a series of micro-collections with different labels and advertising campaigns.  Removing a singular voice from the selection of clothes offered through his line (also titled The Casual Pleasure of Disappointment), Melgaard again turns the shifting, subjective voices of his project on his final products.

The exhibition at Galerie Thaddaeus Ropac in Paris will continue through March 14th. 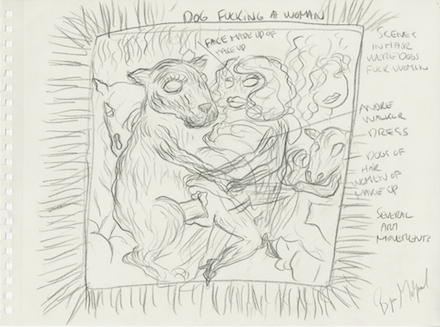 This entry was posted on Sunday, March 1st, 2015 at 12:00 am and is filed under Art News, Featured Post, Show. You can follow any responses to this entry through the RSS 2.0 feed. You can leave a response, or trackback from your own site.