On view at Hauser & Wirth Zürich is an exhibition of paintings on chalkboard by Hungarian-American artist Rita Ackermann, representing a step further into the artist’s investigation into the deconstructive process, presenting a series of many images which seem to have been repeatedly executed and expunged by erasure or weathering. The exhibition will remain on view through March 14th. 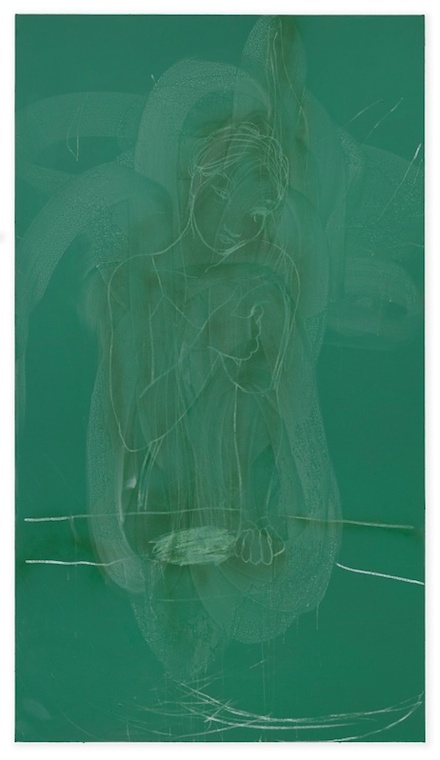 Ackermann was born in 1968 in Budapest, and currently lives and works in New York City. Her earliest works were created between 1993 and 1996, which were classical idyllic scenes that implied a subtle implication of violence lurking just below the surface of the image.  For this exhibition, Ackermann chooses not to abandon figuration altogether, but to explore the line in between abstraction and figuration, fluctuating between systematic and accidental lines – “a script in reverse.”

The new body of work makes much of its own process. First, the canvas is primed with chalkboard paint. Then, a scene involving figuration is drawn in chalk. Next, the drawings are partially washed away in sweeping movements so that only a very small part of the original scene remains visible. The layers and dissolutions of layers continue in a cyclical process, so that the works become gradually abstracted, and new shapes emerge, less specific and more open for interpretation. Once satisfied with the image, Ackermann sprays a final fixative seal over the canvas. 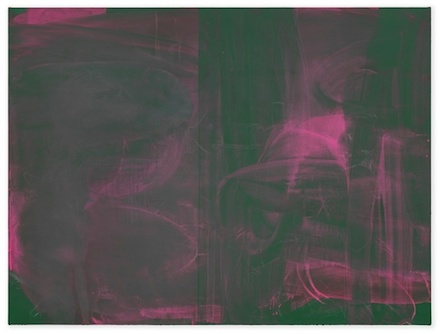 The result of Ackermann’s execution here is something fascinatingly similar to the “chalkboard” allusions of Cy Twombly, albeit taken to one of its natural conclusions: the reproduction of the actual canvas as a chalkboard itself.  Toying with the notion of the historical with these works, Ackermann’s work here allows a second look at the format of the abstract, joined together in both its destructive and constructive gestures, as a cohesive piece, a format that many predecessors have embraced, but which Ackermann makes literal here through her material alterations. 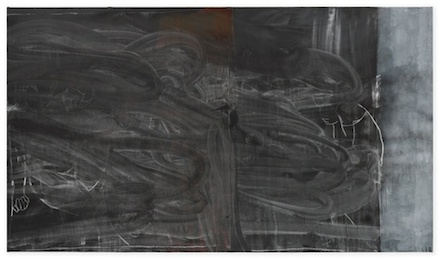 The current exhibition, “Chalkboard Paintings” by Rita Ackermann will continue at Hauser & Wirth Zürich through March 14, 2015. 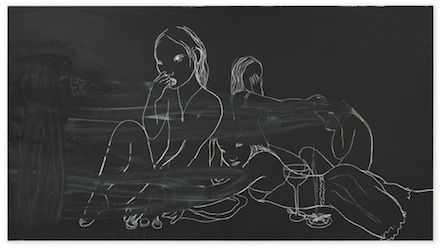 This entry was posted on Sunday, March 8th, 2015 at 12:00 am and is filed under Art News, Featured Post, Show. You can follow any responses to this entry through the RSS 2.0 feed. You can leave a response, or trackback from your own site.