New York – Kehinde Wiley: “A New Republic” at The Brooklyn Museum Through May 24th, 2015 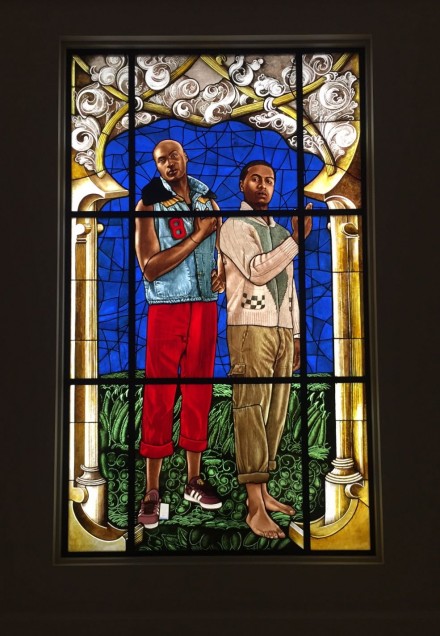 The Brooklyn Museum is hosting a mid-career retrospective of Kehinde Wiley, the L.A.-born and New York-based artist known for his juxtapositions of contemporary youth through the lens of a classical notion of aesthetic. Wiley’s mostly street-cast models, sporting untouched urban attires, replace the highly familiar figures of classic European paintings that generally exclude people of color.  Wiley consequently redeems what is missing from the canon of Western art in his intricately detailed oils on canvas, yet pays homage to Old Masters such as Velásquez or Ingres. Maintaining some distinct elements such as outfits and posture, his models, mostly young males of African descent, do not simply recreate what was already done centuries ago, but also reclaim a collectively missing part of their history. 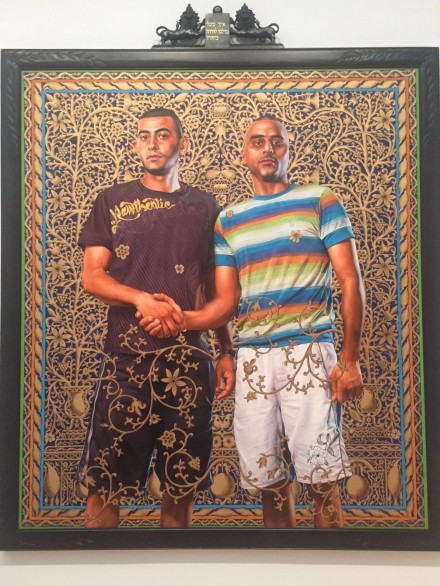 Born to a Nigerian father and an American mother, Wiley grew up in the suburbs of Los Angeles until he started his BFA in San Francisco Art Institute, followed by his scholarship at Yale for an MFA. In 2001 Wiley arrived in New York for a residency at the Studio Museum in Harlem and had his solo show Faux/Real at Deitch Projects in 2003, featuring a massive ceiling painting, a typical aspect of Wiley’s practice melting symbols from European painting within urban elements. 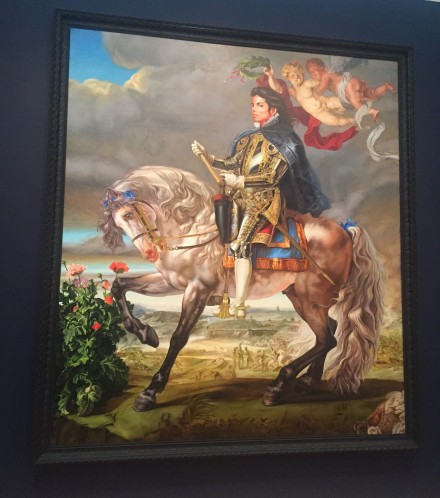 Coming to his current retrospective at the Brooklyn Museum, Wiley has amassed a large body of work pursuing a single yet promising path depicting today’s young generation, mostly from the periphery, in stylized historical contexts. His The World Stage series, for example, turned his subject matter to different destinations such as Jamaica, Israel and Haiti, aiming to portray young generations coming from mixed backgrounds within single frames.

Akin to his artistic themes, Wiley’s production method also follows a specific route starting with the artist and his stuff choosing models from outside the traditional art world discourse, and offering them an extensive selection of images, poses and tableau from the canon of art history to choose from.  His works are as much a investigation of his subject’s own aesthetic tastes, and their impromptu exploration of the deep reserves of Western art portraiture, as they are a placement of the subject within it.  Agency is never denied his figures, and the act of appearing in one of his works signals an exchange not only with Wiley, but with the art world that he represents.  Positioned within the aesthetic of Old Masters that served to depict mythicized war heroes, his models glorify and commemorate authenticity and diversity simultaneously.

Kehinde Wiley: A New Republic is on view at Brooklyn Museum through May 24, 2015. 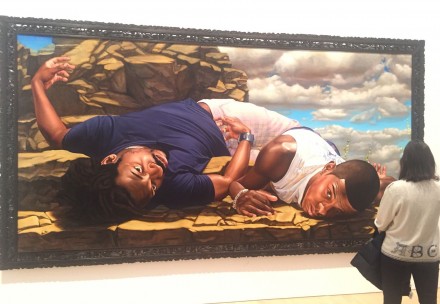 This entry was posted on Thursday, April 9th, 2015 at 2:12 pm and is filed under Art News, Featured Post, Show. You can follow any responses to this entry through the RSS 2.0 feed. You can leave a response, or trackback from your own site.