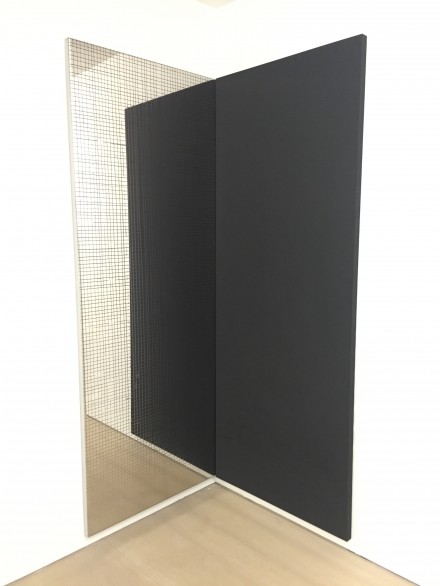 Marianne Boesky Gallery recently presented A Long, Narrow Mark, the gallery’s first collaboration with artist Dean Levin, at its Clinton street location.  Levin has enjoyed a growing recognition in recent years, proven by an impressive range of group exhibitions he has been included in the U.S. and Europe, as well as his debut solo at Upper East Side space of Robert Blumenthal last year. 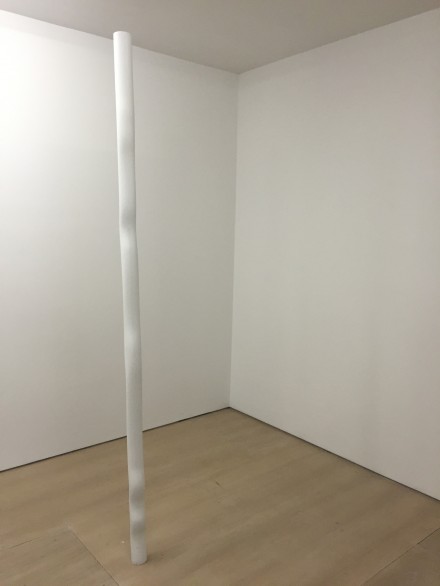 Levin, a graduate of the Pratt Institute of Architecture, has drawn attention with his process-based, minimal juxtapositions, which stand between sculpture, painting and utilitarian design, and which his architectural background undoubtedly plays a key role throughout.  South African by birth, but raised in L.A. and currently based in New York, the artist employs serene and organic materials for his calm, methodical works ranging from UV ink injected steel surfaces to aluminum structures paired with canvases of oil and pigment. 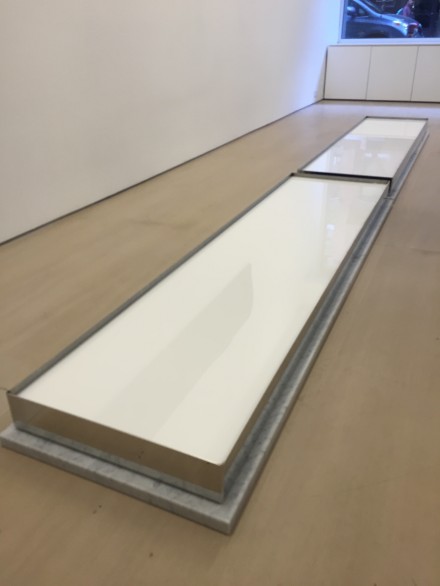 For his show at Boesky East, Levin assembled a clean, luminous visual language dominated by neutral tones of grey, white and black, often orchestrated through his architecturally-informed practice.  His three-dimensional focus in Untitled (Reflective Pool) – containing dyed mineral oil inside a pool-like marble structure, gently occupied the gallery floor, pushing physical limitations of the space with its soothing presence, while pairing with two convex triptychs nearby, reflecting back into the pool as an examination of spatial interaction through a cohesive, sparse visual language. 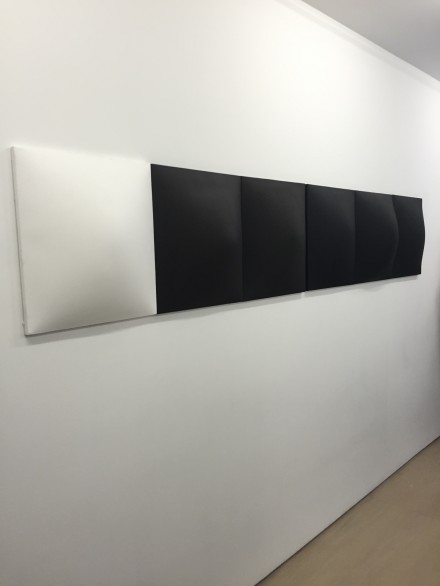 Erected on the the ceiling, in a nearly arboreal form, was Untitled (Vector 1), another example of Levin’s interest in materially prominent, yet visually calm fixations.  The steel mirror, a medium the twenty-six year old commonly employs, amplified spacial constraints of the gallery interior, bringing to mind a set of doors leading onwards towards hidden chambers.  Embellished with grids applied using UV ink, these industrial-size reflective panels, repeated in various groupings, complicated the utilitarian constructs of the mirror to deliver a more enigmatic end result.  Levin seems to enjoy elevating the process elements in his intricately arranged practice, stripping his works to their core forms, and claiming his methodology as equally crucial as the end result itself. 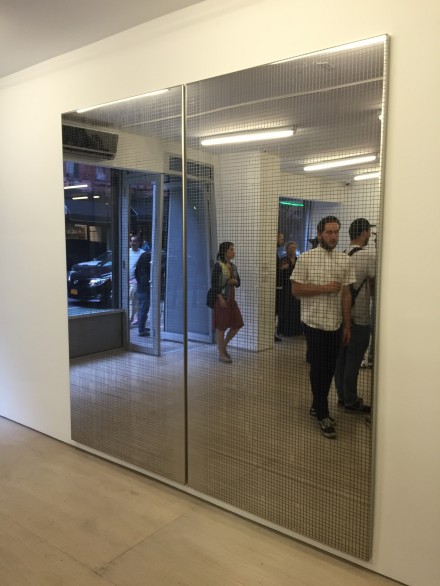 This entry was posted on Monday, June 8th, 2015 at 4:10 pm and is filed under Art News, Featured Post, Show. You can follow any responses to this entry through the RSS 2.0 feed. You can leave a response, or trackback from your own site.