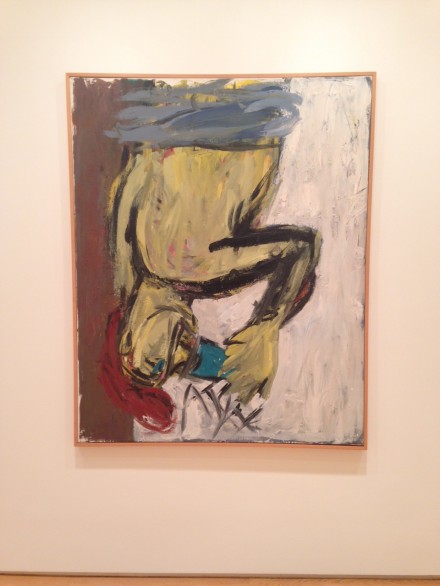 Georg Baselitz, Glastrinker Beckmann (1981), All images via Osman Can Yerebakan for Art Observed.

The prolific German artist Georg Baselitz is the subject of Skarstedt’s current show with two series of paintings from the 1980’s.  Entitled Drinkers and Orange Eaters, the exhibition is composed of two series that the adept Neo-Expressionist created as a study on representation and pictorial narrative.  Accentuating the gallery’s minimal but elegant townhouse space, these vibrant paintings, emanating from Baselitz’s gestural brushstrokes fervidly reclaim the legacy of oil on canvas. 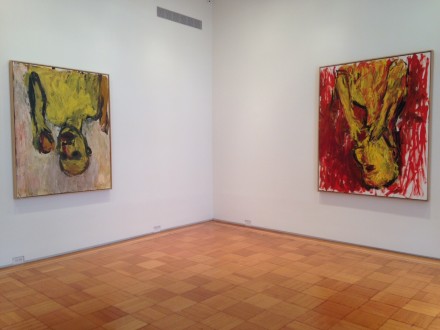 Born in Germany in the late ’30s during the Nazi dictatorship, Baselitz studied in what was then West Germany, where he was introduced to Abstract Expressionism, the first American art movement to invade Europe.  Under the influence of Jackson Pollock and Willem de Kooning, Baselitz pursued an artistic path that was relatively ambivalent to his country’s then-pivotal art movement, German Expressionism.  Exercising the statement behind this ideologically and graphically potent genre, Baselitz shied away from its strong narrative and visual presence. 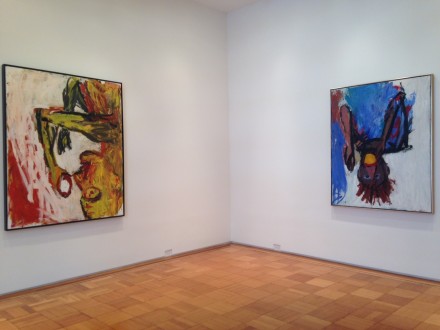 Considered a key figure in the Neo-Expressionist scene that emerged in the 1970s, Baselitz has pursued an artistic path that is liberated from thematic constraints of his precursors, who came from a war-torn mindset. Instead Baselitz grasped a fluid and subliminal tone, finding his influence in mundane and whimsical components of reality. Drinkers and Orange Eaters present some of most vivid outcomes of this methodology, looking at what is everyday and even jovial from a painterly ambitious standpoint. 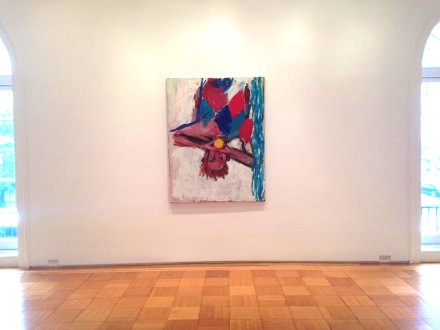 Shown drinking or eating, these figures are reified through Baselitz’s wild painting technique and elaborate vivacity. Exuberantly formed figures with theatrical gestures point back to German Expressionism, but the stark subject matters of Max Beckmann or Otto Dix are not to be found, as a distinct playfulness dominates the canvas. Furthermore, upside down positioning of the paintings support this lightly ironic tone, minimizing representational aspects of his work for the sake of a subliminal and semi-abstract visual language.  The question of whether a figure is still a figure when hung upside down remains open to discussion, while Baselitz’s sharp color palette, containing solemn yellows, buoyant reds and tender blues, contemplate the idiosyncrasies of the human condition.

Georg Baselitz: Drinkers and Orange Eaters is on view at Skarstedt through June 27th, 2015. 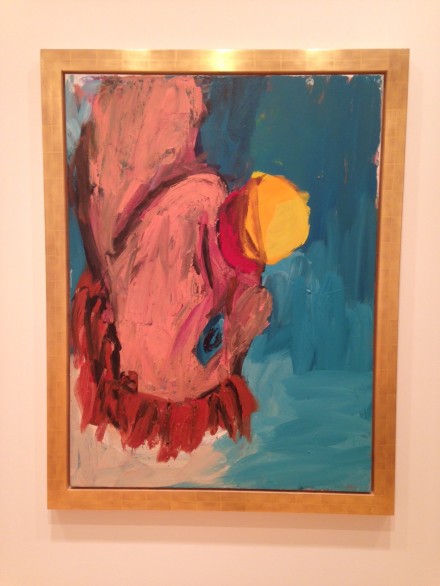 This entry was posted on Thursday, June 25th, 2015 at 12:00 am and is filed under Art News, Featured Post, Show. You can follow any responses to this entry through the RSS 2.0 feed. You can leave a response, or trackback from your own site.