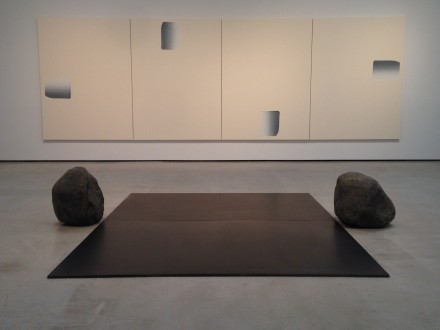 If tranquility could serve as a physical construct, rather than a state of mind, then a state of calm could perhaps be considered as a reconditioning of vision, a way to perceive extended relations of time, material and space.  This sense of the perceptual retooling, and its effects, is one reading offered by Lee Ufan’s continuous series Relatum and Dialogue, the most recent version of which is currently on view at Pace Gallery.   The artist tends towards a relationship between philosophy and the objects he creates with artistic significance, in order to provoke subtle perceptual reconsiderations, as proposed in his writings and contributions to the Mono-ha school of artistic practice. 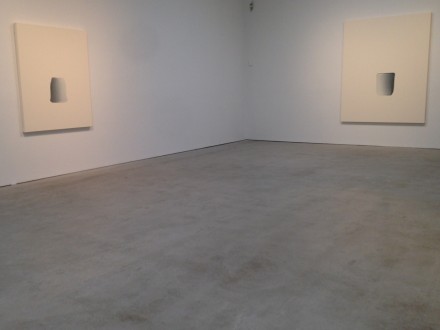 Dialogue (2015) is a multi-canvas series, with large gradient strokes of paint, in which the artist pulls repeated strokes over the same mark with a continuous emphasis that, at first glance, appears as casual dabs on the canvas, offering a simplicity that nominates a weightless gaze.  The marking of space is minute, yet when magnified, emphasizes the thickness of the sandy paint ridges and detailed, scattered edges of the finishing end of a stroke.  These dabs flirt with sculptural tendencies, and are executed in correspondence with how long as Lee can hold his breath during the gesture, binding the human action with the artist’s committed visual project.  The process of paintmaking itself is even implicated in the technique, as the form begins with a full paintbrush and finishes with a diminished supply of material. 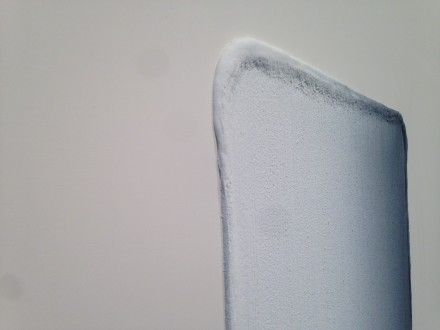 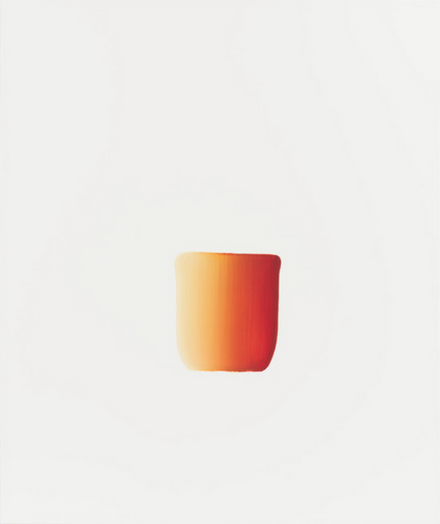 These paintings are ambiguous in form, and the human mind may work to conjure resemblances or associations with other objects and forms to cope with the commercially-abused gestalt phenomenon, horror vacui.  In addition, the arrangement of gradient values in the room suggests common light sources with darker shades, drawing hypothetical boundaries in space.  The color paintings indicate another phenomenon of pigments traveling across a massive surface, which Lee neatly encapsulates in discrete forms. 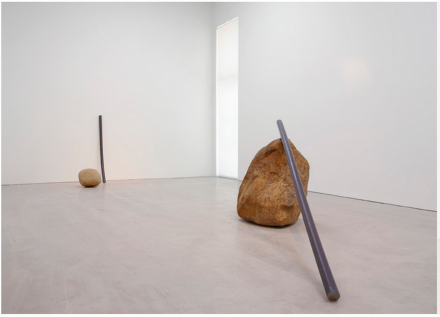 Conversely, Lee’s entry in the Relatum series includes two installation pieces. One is made up of rocks and steel, offering cooperation between the materials to evoke a mood of suspension and reliance.  In the main room, the second installation includes a pair of rocks transplanted to the axis of the seam between two metal plates.  The natural colorings of these mineral objects define their unified presence, and the sensation from these arrangements includes graphic satisfaction and a distinct serenity of mood.

Pace gallery presents Lee’s moments of certainty here. With adamant care and detail, the viewer might arrive at another opportunity to move in their habits of seeing, neatly cleaved through the current commercial environment of sourcing, disseminating and arranging objects for consumption. For those new to Lee’s work, this exhibition is a tantalizing preemptive read of The Art of Encounter (2008).

This entry was posted on Wednesday, June 17th, 2015 at 12:00 am and is filed under Art News, Featured Post, Show. You can follow any responses to this entry through the RSS 2.0 feed. You can leave a response, or trackback from your own site.