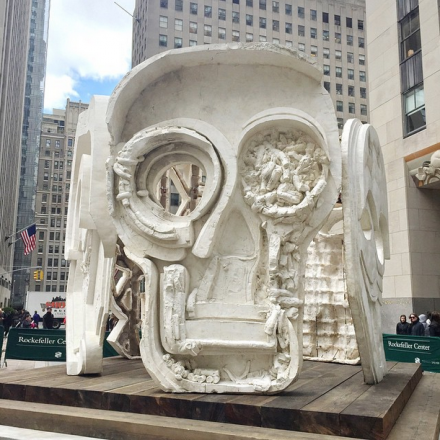 This summer, Rockefeller Center has launched a continuation of its partnership with the Public Art Fund, opening a new public work by British-born, Los Angeles-based artist Thomas Houseago.  The work, titled simply as Masks (Pentagon), the artist continues an investigation of spatial interactions that has defined his work over recent years.

Houseago’s work has long taken the state of temporality, notably a sense of movement and urgency, as a part of his stylistic oeuvre.  The artist’s plaster and wood sculptures are often executed quickly, leaving their form to occasionally haphazard, jagged proportions and lines.  A fitting continuation of modernist sculptural practices, Houseago deals explicitly with time and space, particularly how the two interact in the conception and completion of his work. 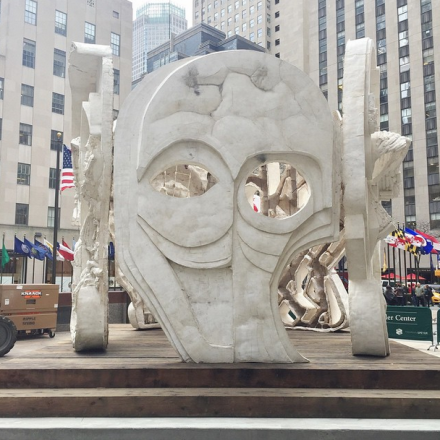 Combining two of the artist’s formal interests (large-scale, immersive sculptural environments and the facial reconfigurations of his mask series), the artist’s public installation at Rockefeller Center offers a strangely compelling environment, one in which passerby are invited to wander through the immense, crooked faces much in the same way that visitors were invited into the artist’s Moun Room, created last year at Hauser and Wirth.  In each, the figurative and abstract architectural details the artist selects offer collisions of interior and exterior, all the while tracing the occasionally fluid relationship of the two states as they move from one to the other. 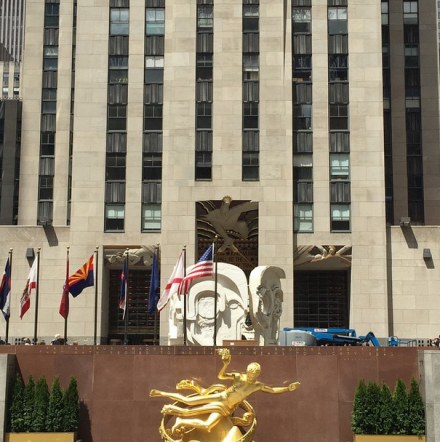 Yet perhaps the most interesting note of Houseago’s most recent work, both here and with his Hauser and Wirth show last year, is the sense of playfulness.  In each, a sense of child-like wonder and exploration seem to be a formative aspect of the work’s activation, and Masks instills a certain youthful vigor as the viewer passes through it, pausing occasionally to peer out from the seclusion of the work’s center on commuters and tourists, almost as if from the center of a high-concept jungle gym.  The artist seems increasingly interested in this free-roving experience with his work, and seems to have found a promising line of pursuit in which to expand his already well-developed practice.

Houseago’s Masks is now on view at Rockefeller Center until June 24th, 2015. 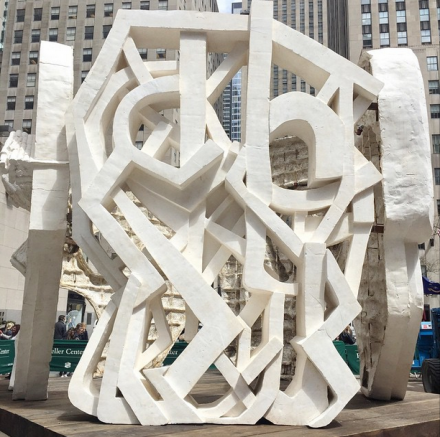 This entry was posted on Wednesday, June 3rd, 2015 at 4:37 pm and is filed under Art News, Featured Post, Show. You can follow any responses to this entry through the RSS 2.0 feed. You can leave a response, or trackback from your own site.