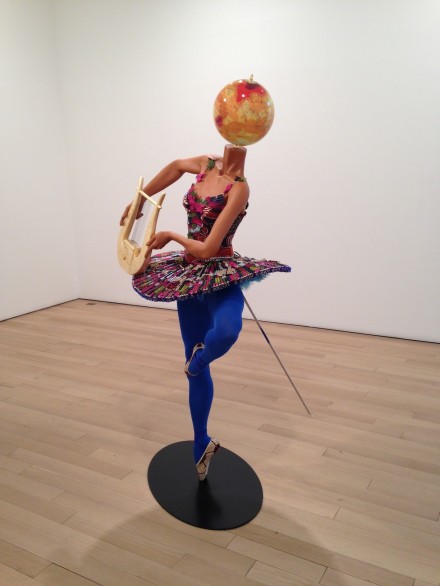 Currently on view at James Cohan Gallery is Yinka Shonibare MBE’s new body of work, including exuberant, playful sculptures along with digital prints.  The UK-based Nigerian-born artist came into recognition with his hybrid sculptures, utilizing Dutch wax fabric, a textile material of complex patterns and tight allusions to colonialism due to its long, bureaucratic history of trade.  In his recent exhibition, Shonibare weighs on a broader issue compared to his familiar themes of colonialism, political supremacy and racial identity, looking at global climate changes and growing effects of these permutations throughout the world. 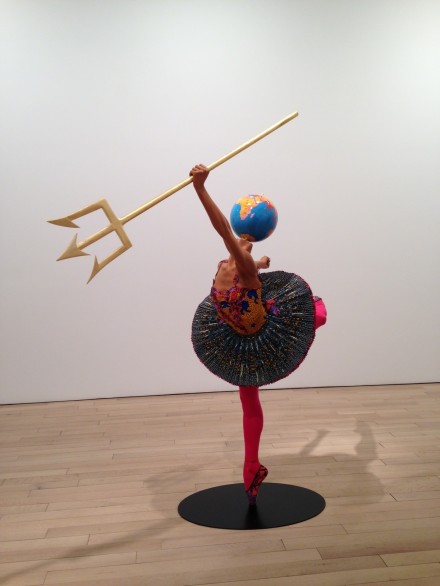 A member of the Young British Artists of the ‘90s, Shonibare has amassed an expansive body of work in sculpture, printmaking, painting and video since his international breakthrough during the Okwui Enzewor-curated documenta XI, in 2001. Dutch wax fabric, the Goldsmith College graduate artist’s emblematic production material, makes its appearance throughout the show, clothing a number of ballerina sculptures, each standing as a recreation of an icon from Greek mythology.  Poseidon, Apollo and Zeus — all male figures of strength, authority and superiority — are embodied in classically slender, occasionally flamboyant female bodies wearing tutus and limber poses, maintaining traces of their divine powers through the symbols they are clutching. 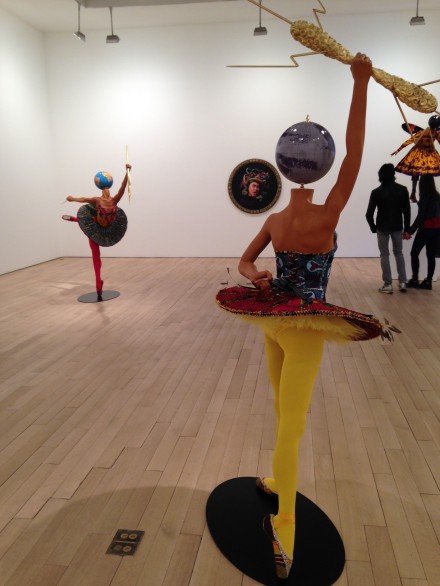 Their status as the creators of natural disasters in Greek mythology is paralleled with their tempestuous and often destructive spirits; however their prevailing identities are obstructed by Victorian style globes substituted for their heads.  Contrasted against their symbolic tokens — a thunder bolt, a lyre and a trident — modern day weapons are hidden behind them, adding a mundane, yet timely thread into the discourse. Through a sarcastic and allusive tone that merges Shonibare’s familiar elements with antiquity and textile arts, the artist embodies his stance on continuous destruction of natural resources and wild life by mankind. 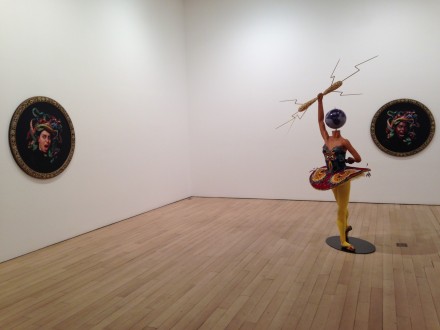 Covering four sides of the gallery on east, west, south and north ends are digital prints of another iconic figure in mythology, Medusa.  Adopting Caravaggio’s version of the figure, whom the goddess Athena punished by turning her hair into tangles of snakes, Shonibare uses four models from four different races. Referring to separate corners of the world, models of Asian, Indian, African and Caucasian descents perform Medusa’s iconic, repelled visage alternating her snake hair with African textile.  The horrified expression the Medusas carry narrates the artist’s concerns on the fate of Earth.  Coinciding with Rage of Ballet Gods is Colonial Arrangements, an exhibition of new and previous works by the artist on view at Morris-Jumel Mansion in the Washington Heights neighborhood of New York City.

Yinka Shonibare MBE: Rage of the Ballet Gods is on view at James Cohan Gallery through June 20, 2015. 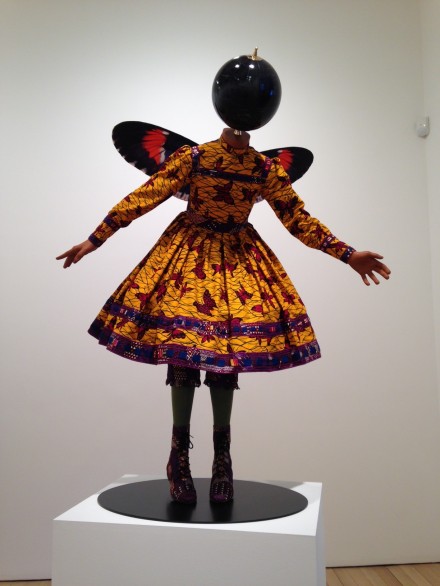 This entry was posted on Saturday, June 13th, 2015 at 12:00 am and is filed under Art News, Featured Post, Show. You can follow any responses to this entry through the RSS 2.0 feed. You can leave a response, or trackback from your own site.