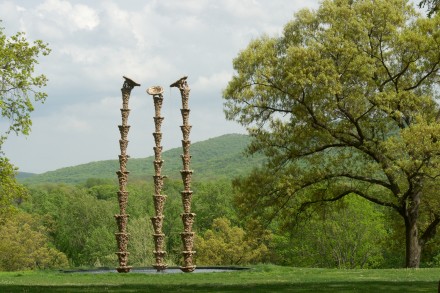 As summer reaches its zenith in New York, countless outdoor exhibitions and special public projects have sprung up across the city and region, encouraging visitors to take a more intrepid stance towards the art world.  Continuing its annual series of special exhibitions, the Storm King Art Center in New Windsor, NY has invited New York artist Lynda Benglis to take full advantage of its sprawling Catskills property, bringing a number of her organically-inspired cast sculptures to investigate the picturesque environs upstate.  With 12 outdoor sculptures and an additional 15 on view inside the museum galleries, Benglis’s exhibition is a striking look at the artist’s aesthetic interests over the past 15 years, as she increasingly incorporated notions of public, urban space and natural phenomena into her dizzyingly complex sculptural assemblages. 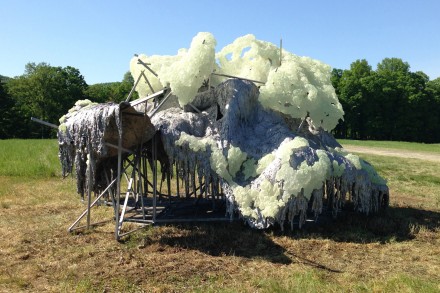 Spanning a stretch of Benglis’s sculptural practice that took great inspiration from natural forms, the works here are arranged not only to respond to the scenery of rolling hills and sprawling lawns, but also the other works permanently on view.  Deep into the Storm King property for instance, near Andy Goldsworthy’s famous Storm King Wall, Benglis’s Hills and Castles echoes notions of interiority and exteriority through its twisting forms.  This organic, cave-like sculpture rests on a stainless steel framework, with a shimmering, phosphorescent polyurethane dripping down over its skeleton to create a sense of an ominous, cave-like structure.  Benglis’s drip-style is seen throughout her works here, and represents the movements of water, as well as creatures that dwell within it.  This interest in fluidity is echoed in the selected works that actually function as fountains, underscoring the relationship of human existence and its experience within the natural world in relation to water. 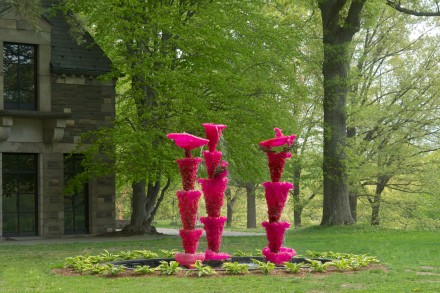 Benglis’s organic sculptures often mesmerize with their textured surfaces and interaction with the movement of flowing water.  Her Pink Ladies and Pink Ladies (For Asha) fountain works, executed in a bright, fluorescent pink, take their inspiration from a single kite Benglis admired during a kite-flying festival in Ahmedabad, India, and reference Diane Vreeland’s assertion that the hue is “the blue of India.”  Her other fountains, placed outside have a slightly violent component, and appear to form abstract mystical creatures, giving her natural focus a more fantastic undertone. 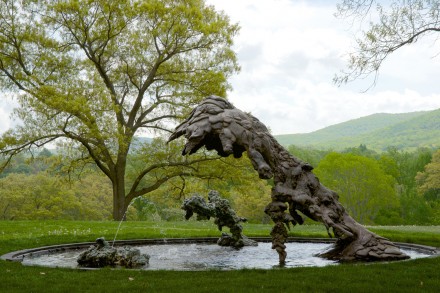 The works inside the Storm King museum have the same effect as Benglis’s outdoor creations, acting as a sort of model for her large-scale creations outside.  Using glazed ceramic and stainless steel as her core materials, Benglis demonstrates her journey exploring various organic forms while playful engaging with her materials.  Additionally, some of her work utilizes stone or rock, creating an organically focused world made from an intersection of natural and man-made substances.

This entry was posted on Thursday, July 16th, 2015 at 12:00 am and is filed under Art News, Featured Post, Show. You can follow any responses to this entry through the RSS 2.0 feed. You can leave a response, or trackback from your own site.