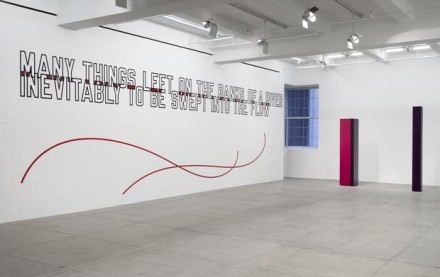 The group exhibition at Marian Goodman Gallery revives an excitement for the accomplishments of formal, conceptual and technical art practices during the mid to late 20th century, presenting a lively exhibition that groups together an overlapping group of six prolific artists: Sol LeWitt, Gerhard Richter, Fred Sandback, Anne Truitt, John McCracken and Lawrence Weiner, one is privy to the continuing reverberations of works that defined both minimalist and conceptual techniques in contemporary art practice, often passing from one school to the other while redefining notions of structure, method, dimensionality, and form.  Stoic in its midtown location, the exhibition presents an impressive collection of conceptual and minimalist classics, offering continuing pivots and critically advanced methodological expectations of non-referential visual forms. 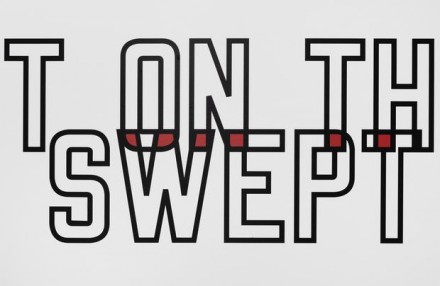 Lawrence Weiner, Detail: Many Things Left on the Banks of a River Inevitably to be Swept into the Flow (2014) via Marian Goodman

Weiner’s familiar lettering and graphic curves from Many Things Left on the Banks of a River Inevitably to be Swept into the Flow (2014) offers a strong opening to the show, evoking a dual forked movement through crossing lines and overlapped text, and occupying an entire wall in the first room of the space. The swerving lines compliment Weiner’s lyrical message, indicating an extended parabolic eventuality of material – whether units of time, figurative objects in water, or reading patterns for his notations in space.  Conversely, Ritcher’s addition to his Strips series, 930-7 Strip (2015) is a visual sensation of zipping movement. The artist digitally abstracts a segment of an original photograph, manipulating his bright colors and active smearing techniques to create a hyper-clean, hypnotic surface. 930-7 Strip appears to halt a moment in time or a flash of landscape, as the stacking of evenly proportioned striations under a smooth glass surface commands a sense of restless pause. 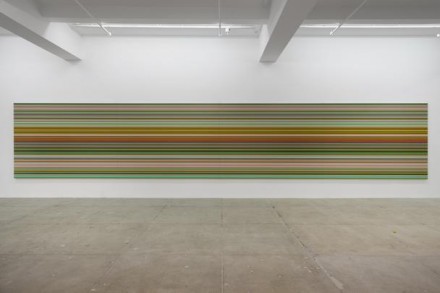 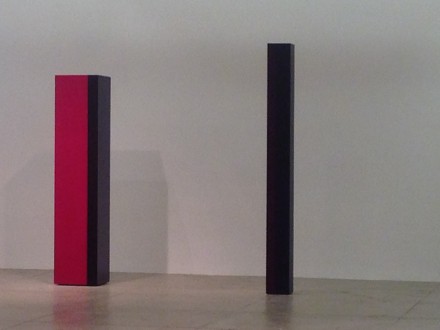 In between Weiner and Richter are Anne Truitt’s slender color field blocks, Toth (1983) and Quipe (1984). Each piece is painstakingly layered with thinned paint, resulting in marvelously grainless wooden sculptures.  Toth is a gradient succession between plum and burgundy, while the color contrast for Quipe is an inventive combination, resembling a humorous affinity for Pop art aesthetics.  While tracing the smoothly shifting hues as they run across the sculpture, the object of color becomes its own subject. 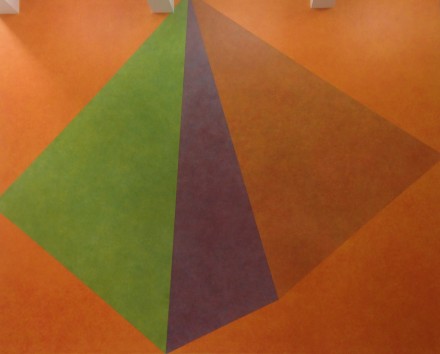 Sol LeWitt’s colorful graphic wall print is also a welcome addition to the New York gallery, complimenting his comprehensive and ongoing exhibition at Dia Beacon. Wall Drawing #459 elaborates shrinking and expanding angles, sprawled out across an entire wall. A playful mathematics extends an outward sprawl of form, and angular sections of green, purple and orange perpetuate an optical illusion of shadows, reliefs and gravelly surfaces, taking the surfaces of the walls themselves as a textural component. 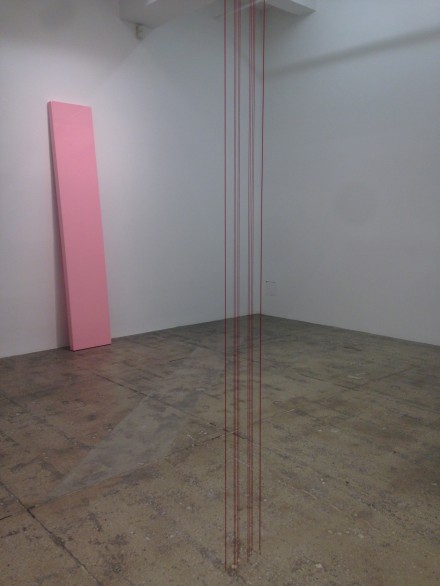 On view in another corner of the gallery space is Untitled (1967), a Fred Sandback work composed of fuzzy red yarns, fading into a contoured form, and passing out of sight through the inside of a marked cube. Sandback’s work promotes a concrete openness, mining how lines correspond with our human construction of marked space. His sculpture here makes one alert to the space itself, particularly in contrast to the nearby plank work by John McCracken, a luminescent pink piece from 1966 that bridges the architectural horizon of the room. Directional light accents the strong upright connection between the ground and the wall, quietly evoking McCracken’s challenging philosophies on space and form.

The exhibition is on view through July 31st.

This entry was posted on Wednesday, July 15th, 2015 at 12:00 am and is filed under Art News, Featured Post, Galleries, Show. You can follow any responses to this entry through the RSS 2.0 feed. You can leave a response, or trackback from your own site.