New York – “Storylines” at the Guggenheim Museum Through September 9th, 2015 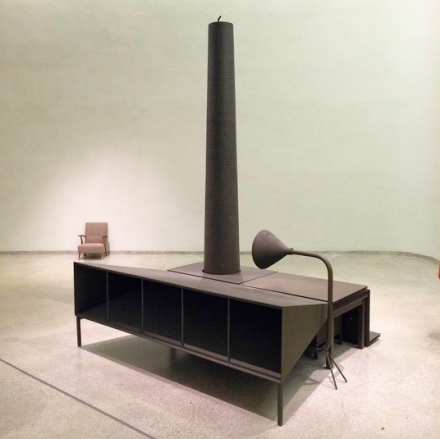 Compiled from over 100 works in the Guggenheim Museum’s personal collection, the current exhibition at the uptown institution, Storylines: Contemporary Art at the Guggenheim, feels like something of a victory lap for the museum, following up on its excellent On Kawara exhibition with an extended show of contemporary works that spans the last thirty years, and which uncovers a broad curatorial focus at the core of its collection.  Emphasizing a nuanced interest in the narrative as a core unifying element for disparately realized works, objects and assemblages, Storylines pulls from diverse practices to portray the often challenging representative missions that contemporary artists set for themselves. 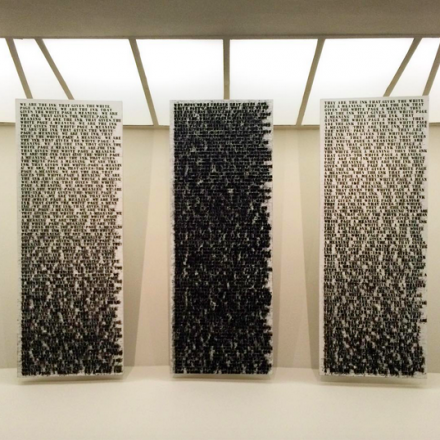 The works on view range from the explicit to the abstract, often allowing multiple pieces and objects to tie themselves together in a final presentation.  In Simon Fujiwara’s Rehearsal for a Reunion (with the Father of Pottery), for instance, a hanging video work accompanies a series of objects, most of which are eventually depicted on-screen during a conversation between the artist and an actor standing in for the artist’s father.  Similarly, albeit reflected in a much less explicit form, is Matthew Barney’s Cremaster series, which is included here in the form of the vitrines that house DVD’s for each of the five films in the series. Combining the aesthetic signifiers of each of his films and their respectively rendered symbols, the exhibition hints at the unified thematically of the work, but leaves much to the imagination. 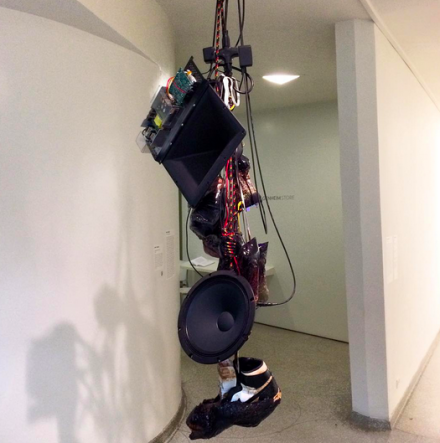 Other works on view take a decidedly less explicit turn on notions of narrative and presentation. Several of Kevin Beasley’s hanging sculptural works on view, which are bound up in notions of both cultural representation and performance, taking into account the artist’s own performative inclinations as a sound artist and musician in the work’s final form. Similarly, Carol Bove’s work seems occupied with the narrative that springs from a body of objects by proxy, presenting a shelf of books, sculptural fragments and other objects unified by their ties to American cultural histories and specific iconographies. Taryn Simon’s clustered photographs and newsprints, just a few floors down, offers a similar take. 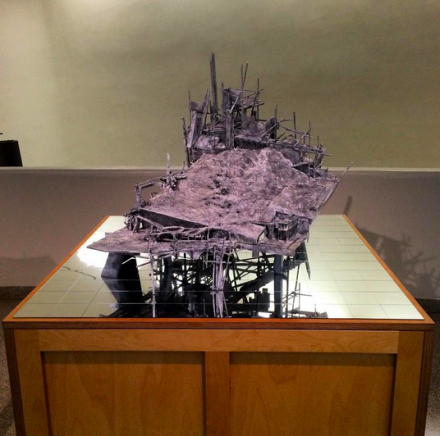 Countering this particular blend of shared histories in media, a series of beaded curtains from Félix González-Torres turns the space of the museum into a narrative of its own. Dividing the stairwells off from the rest of the museum walkways, the work lends something of a meditative calm to the exhibition, as some hesitate to pass through to the other side, leaving the adventurous alone with their thoughts. On the ground floor, the abstract sculptures of Mark Manders leave an ominous taste, charging recognizable forms with an abstraction that drives at alienation and confusion. 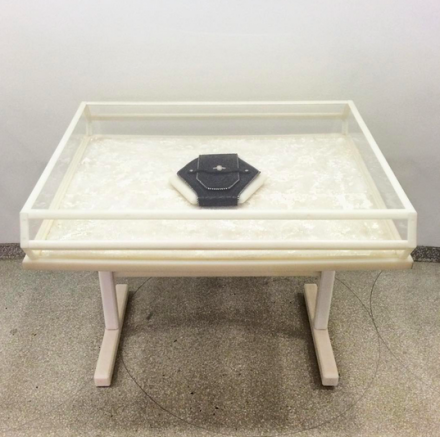 But there are any number of lines to take on the exhibition, as its title suggests, and the conclusions a viewer draws may well connect through another series of works. It’s this polysemic approach that makes the summer exhibition of contemporary work seem so challenging, pulling conclusions from one’s own thread of inquiry.

Storylines is on view through September 9th. 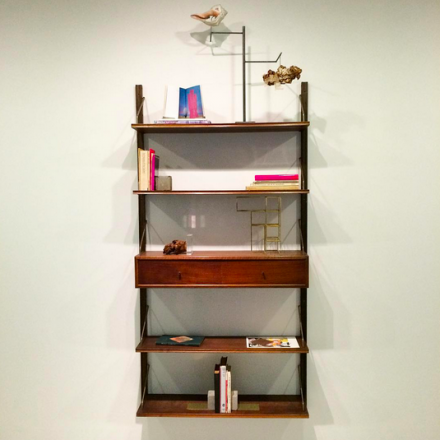 This entry was posted on Wednesday, August 26th, 2015 at 12:15 am and is filed under Art News, Featured Post, Show. You can follow any responses to this entry through the RSS 2.0 feed. You can leave a response, or trackback from your own site.