Weston-Super-Mare – Banksy: “Dismaland” at The Tropicana Through September 27th, 2015 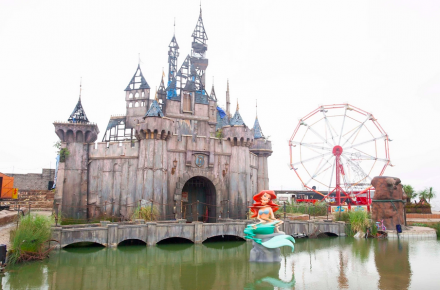 Banksy, the master of grandly executed public projects and sharp jabs at the banality of pop culture, has opened his newest project, Dismaland.  The exhibition, which the subtitle a “family theme park unsuitable for children,” is spread out across the Tropicana, an abandoned site in the seaside town of Weston-super-Mare, and features a number of contributions from more mainstream contemporary artists, including Damien Hirst and Jenny Holzer.  Yet the park is still definitively Banksy, with his trademark irreverence and coy inversions of pop culture formats abounding across the derelict swimming club in the British resort town, and continues his barbs towards the Walt Disney Corporation. 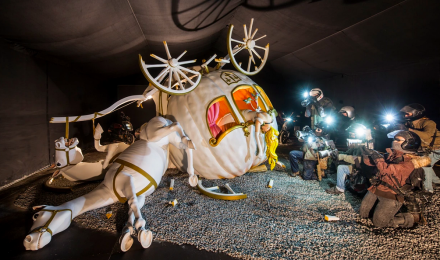 The project seems to fall a bit short on its intended critique.  Given the scale and depth of the exhibition, one might be inclined to note that it seems to move Banksy closer to his spectacle-shilling targets than the artist might be comfortable admitting, but the work does have its strong points. One includes an understated, warped statue of The Little Mermaid that seems to float above the murky water it’s installed in, while the subject’s face seems to ripple.  Another work, depicting a dead Cinderella in her overturned pumpkin crash, seems a wincing reference to the  death of Lady Diana, and the tabloid horror of modern celebrity.  A third, hilariously overwrought inversion comes on the carousel, where a worker with boxes of lasagna implies a stark fate of the tired horses. 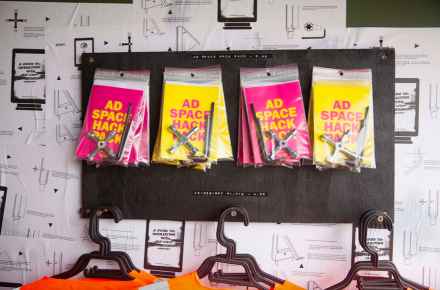 It’s notable to consider the tone of Banksy’s recent appearances, including 2013’s ongoing series of projects in New York.  Playing on his own notoriety, the exhibitions seem to present economic stimulus as an ulterior motive.  In New York, it was an emphasis on the city’s enterprising citizens and the often obscured economics of street capitalism.  Here, the somewhat languishing tourist site of Weston-super-Mare becomes a destination again through some light subversion.  The ticketing chaos that has already marked the opening days of the exhibition is more than enough proof, with millions clamoring to see the exhibition and admission only available at the door.  The resulting lines, with stone-faced visitors waiting hours to see the work, is perhaps just as fitting with the artist’s intentions as any work on view. 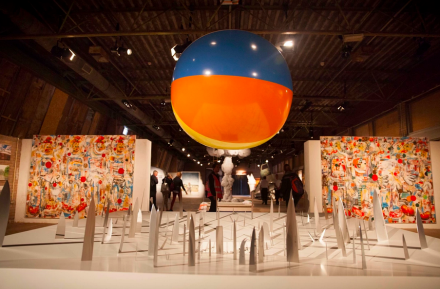 Damien Hirst at Dismaland, via The Guardian 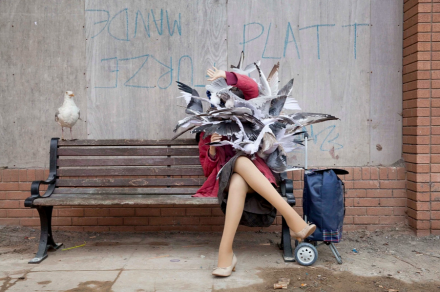 This entry was posted on Sunday, August 23rd, 2015 at 11:25 am and is filed under Art News, Featured Post, Show. You can follow any responses to this entry through the RSS 2.0 feed. You can leave a response, or trackback from your own site.