New York – Gego: “Autobiography of a Line” at Dominique Lévy Through October 24th, 2015 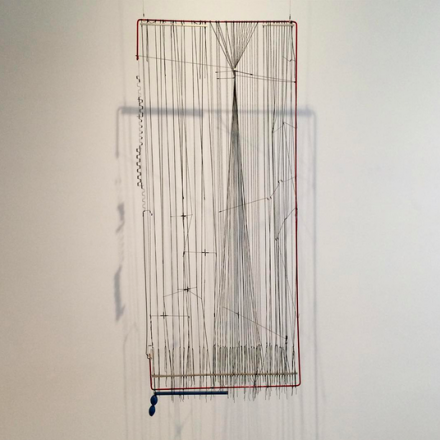 German-born Venezuelan artist Gego (born Gertrude Goldschmidt) is the subject of the opening fall show at Dominique Lévy this month, charting the late artist’s investigation of geometric form and space as it translates through the formal signifiers of modernity. 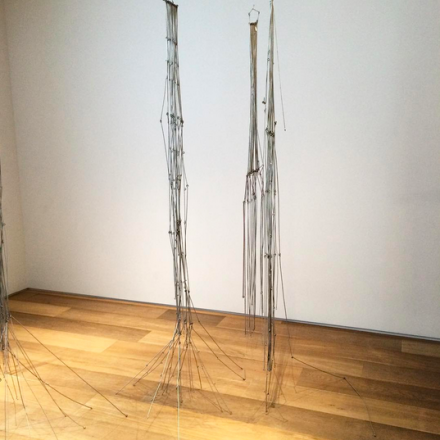 Gego, Autobiography of a Line (Installation View), via Art Observed

Born in Hamburg, Gego first began her work studying at Technische Hochschule in Stuttgart, before fleeing the country one year later at the dawn of WWII.  Settling in Caracas, she began her work as an investigation of kinetic art and constructivist impulses, always focusing on the formal capacities of lines moving through space.  Often tied to many of the Brazilian neo-constructivists, as well as to aspects of New York minimalism, Gego’s work feels distinctly on its own in the exhibition, drawing strength from the selection of pieces on view, and their consistent reiteration of her formal interests. 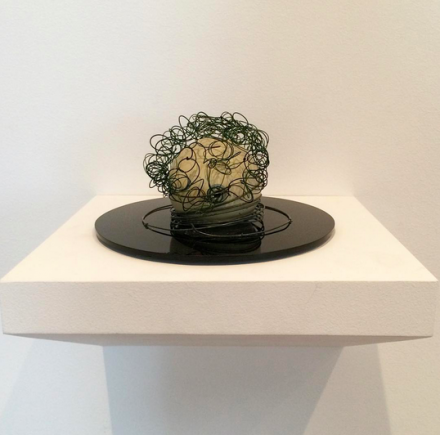 The artist’s work carries a remarkable sense of delicacy, of intuitive relationships suspended in mid-air, or separated by sparse, material dividers.  Using metal wires, thread, and small salvaged scraps of material, Gego’s work plays at the line between chaotic overload and a quiet, resigned balance.  In one wall-mounted piece,  her assembled threads converge towards single points or expand outwards, creating internal geometric narratives that shift as the viewer passes the work.  In another piece, she traces a slight pink triangle across the wall surface using reflections of light from a twisted piece of wire mesh. 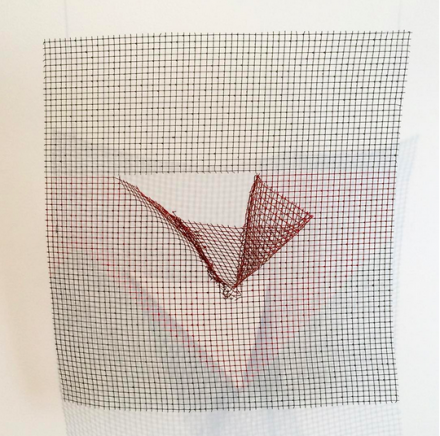 These notions of relief and reflection sit at the core of the artist’s work, and consistently make themselves felt throughout.  Even in the artist’s collaged works, the threaded colors and lines that she uses to create patterned tapestries of colored paper create a distinct sense of depth and space.  For Gego, the surface is eminently significant, but only in relation to a larger whole, one that incorporates light and shadow, distance and the surrounding spaces to breathe the full breadth of its affective capacity into the work itself.

Turning towards the possibilities for clustered forms and shifting political assemblages, Autobiography of a Line is on view through October 24th. 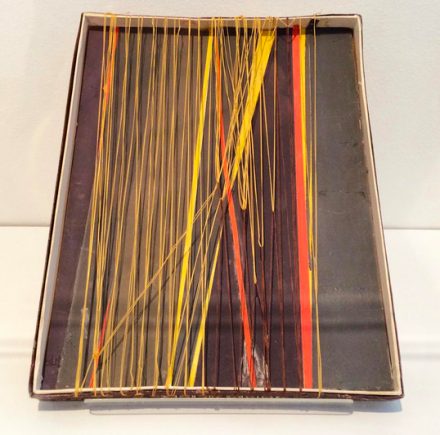 This entry was posted on Tuesday, September 15th, 2015 at 12:15 am and is filed under Art News, Featured Post, Show. You can follow any responses to this entry through the RSS 2.0 feed. You can leave a response, or trackback from your own site.