New York- Gilbert and George: “The Early Years” at MoMA Through September 27th, 2015 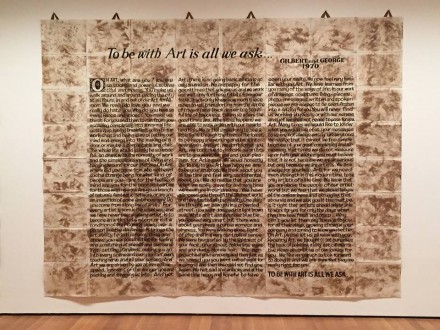 The artist duo Gilbert Prousch and George Passmore, better-known by just Gilbert & George, the self-proclaimed “Two People but One Artist,” first met in 1967 studying sculpture in London.  As the story goes, the two were taking photographs of one another holding their sculptural works, when it struck them that their own corporeal presence in the images was far more interesting than the sculptures.  As a result the pair deemed themselves “living sculptures,” and following the line of this ideology, have since considered their partnership, their artistic work (in all mediums), and even the mundane operations undertaken in their everyday lives, to be “Sculpture.”  For this reason, Gilbert & George made their mantra “Art for All,” endeavoring to make sculpture and sculptural practice accessible and liberated from the discriminatory elitism of the art world at large, instead focusing on the idea that accessible art derives from life itself. 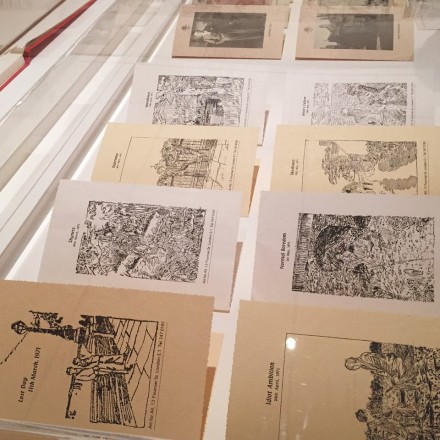 In Gilbert and George: The Early Years, The Museum of Modern Art draws from its collection of the pair’s works, focusing on those made by the duo in the years following their initial meeting through to 1976.  Many of the pieces on view are small works on paper, including mailings, postcards, and invitations, all signed, “Gilbert and George, the Sculptors,”and sent by the pair to a number of artists and gallerists.  In this way, Gilbert and George “short-circuited the art world – going through letter boxes directly to the human living space,” and subsequently bringing attention to the often exclusionary workings of the art scene. 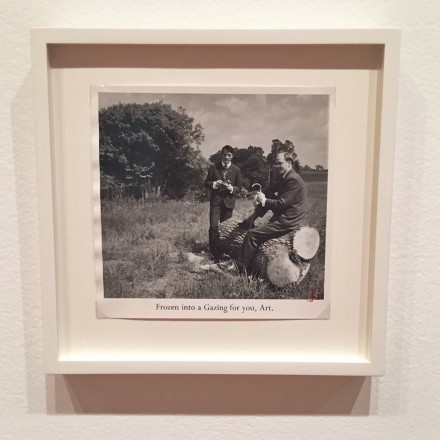 One of these “Postal Sculptures” is a plain greeting card, with a scribbled “Happy Easter from George and Gilbert” and an unsophisticatedly-drawn smiley face in thick shades.  The simplicity of such a work calls to mind a sort of gestural primitivism, but key to most of the works by Gilbert and George is that the air of authenticity effused by the commonplace postcard — while it exists in earnest as a counteraction to the works being made contemporaneously — is thoroughly tinged with a self-aware absurdity.  Take, for instance, A Sculpture Sample Entitled Sculptors’ Samples, which quite literally gathers together a number of samples of the sculptors’ ash, hair, breakfast, and so on, aptly labeling them, G&G’s tobacco, G&G’s hair, and so forth, and thereby playfully parodying the excessively reverent conceptions of the artist and his place in society, or, on a deeper level, the absurd functioning of society as a whole. 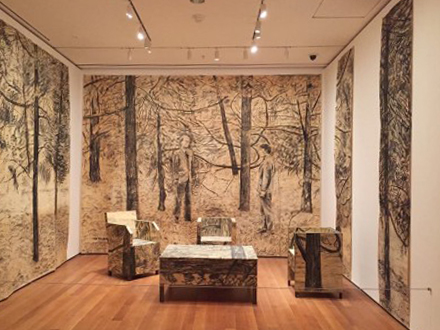 Large-scale “Charcoal on Paper Sculptures” are in keeping with these thoughts: a work from 1970 entitled To Be With Art is All We Ask, confronts the viewer with a grandiose psalm, directly addressed to Art, flanked by two Rousseauian scenes of the artists, dressed in their signature matching suits and musing in pastoral settings.  Other works include tongue-in-cheek Video Sculptures,” such as the humorous Gordon’s Makes Us Drunk, a video wherein the artists deadpan while repeatedly guzzling glasses of gin, dubbed over with the voiced reiteration, “Gordon’s makes us drunk.” Gilbert and George: The Early Years is well-worth a viewing: the banal, the hackneyed, the monotonous routine of daily life are there injected with a certain gaiety by the artists, simply through the aligning of their own life and subversion of it with Art itself.

Gilbert and George: The Early Years is on view at MoMA through September 27. 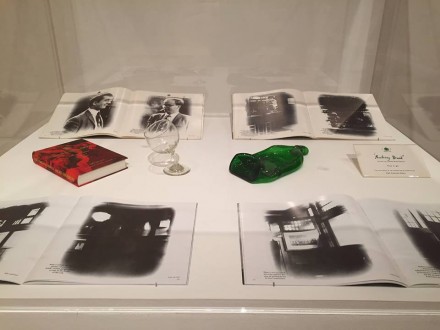 This entry was posted on Wednesday, September 23rd, 2015 at 12:00 am and is filed under Art News, Featured Post, Show. You can follow any responses to this entry through the RSS 2.0 feed. You can leave a response, or trackback from your own site.