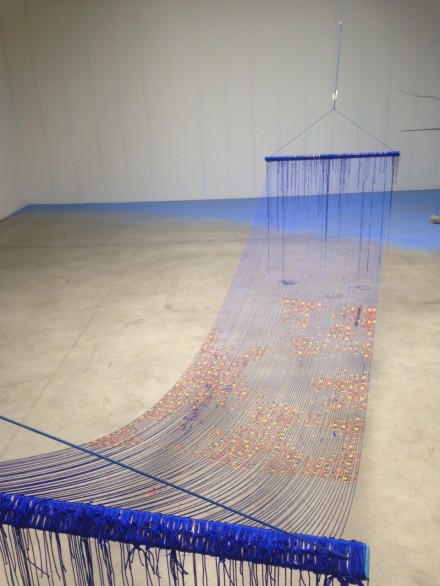 Following her acclaimed 55th Venice Biennale presentation for the U.S. Pavillon in 2013 and her current participation in this year’s Okwui Enwezor-curated 56th installment, Sarah Sze is the subject of a solo exhibition at Tanya Bonakdar Gallery for her new body of work, returning to common themes that have informed her particularly interdisciplinary practice over two floors of the gallery space.  As is frequently the case with Sze’s work, architecture is often used as a meditative force on the space surrounding her pieces, rather than a utilitarian system of constructing materials.  Here, these explorations fall into conversation with Sze’s use of visually calm and fluid materials, as she strips the physicality of such objects from their primary definitions and purposes. 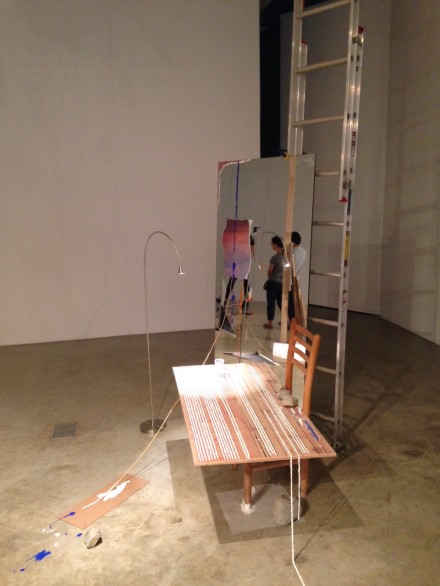 Since her first solo exhibition at White Columns in 1997, the Yale graduate has pursed ambitious site-specific arrangements that possess potent and impeccable harmonies, assuring that each piece plays a crucial role for the presentation as a whole.  Shifting interpretations of our surroundings, in response to the fast-paced evolutions of technology, builds the foundation of Sze’s oeuvre. In relation to this constant shift, circulation of information and the extent of communication between groups of individuals face substantial reformations as reflected in Sze’s vigorous arrangements. 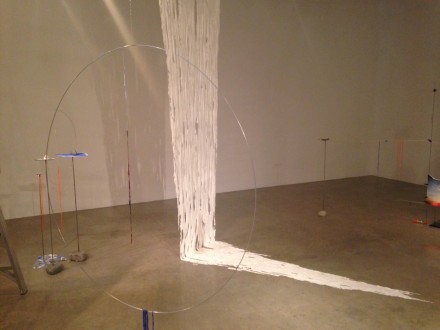 Sze begins her explorations on the first floor gallery, with a vibrant constellation of various objects which extends all the way to the edge of the reception area.  Reminiscent of what could be the aftermath of a scientific experiment, or the construction of a building, a large variety of objects dispersed around the space slowly unveil an aesthetic inclination that seems strongly vibrant. 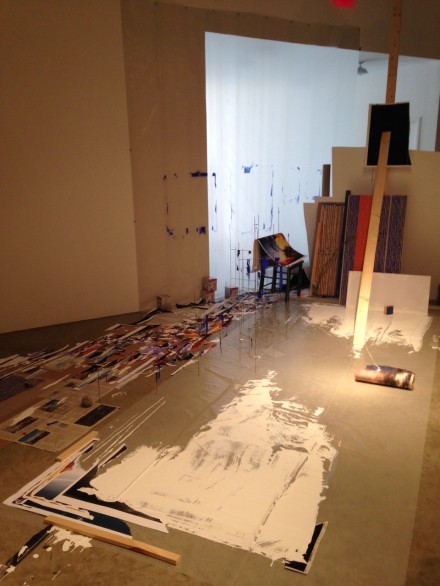 Reducing any possible hierarchies among such vast numbers of materials to a minimum, Sze orchestrates a viewer experience that requires strong attention to detail, and a certain degree of subjective interpretation.  Starting from the floor and reaching up to the ceiling, industrial materials such as ladders, tin wires, wooden panels and drips of paint overlap with mundane objects, including water bottles, soda cups or pages of newspaper, imposing the audience a fluid narrative of happenings and encounters between materials.

Waiting upstairs in the second floor gallery, another group of arrangements, more modest in size, yet equally intriguing and diverse, pull the viewer into a more meditative, calming encounter.  The main figure in this room is doubtlessly Hammock, a large scale hammock in a bright blue tone, tied to the ceiling as its edges drape onto the floor.  Made out of strings covered with acrylic paint, this labor-intensive creation combines the fragility of knitting and the durability of a bed, simultaneously conveying ephemerality and determination. 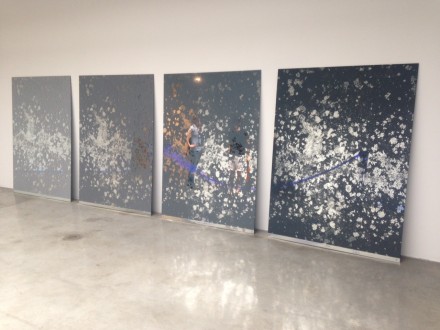 Sarah Sze is currently on view at Tanya Bonakdar Gallery through October 17, 2015.

This entry was posted on Tuesday, October 6th, 2015 at 12:00 am and is filed under Art News, Featured Post, Show. You can follow any responses to this entry through the RSS 2.0 feed. You can leave a response, or trackback from your own site.