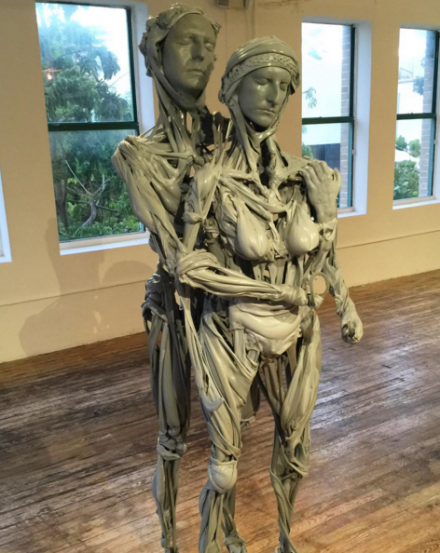 Work by Pawel Althamer at Unrealism, via Rae Wang for Art Observed

With the Miami Beach Convention Center opening its doors this morning, the early arrivals to Art Basel Miami Beach decamped to Miami proper this past evening for a series of openings and exhibitions in the city’s thriving Design District. Spread across a several block radius, the neighborhood’s simultaneous hosting of the ICA Miami’s temporary installation space (which opened just one year ago during Miami Art Week 2014), the joint Larry Gagosian/Jeffrey Deitch exhibition, and a number of other projects made it a central location for the first major night of Art Week Events. 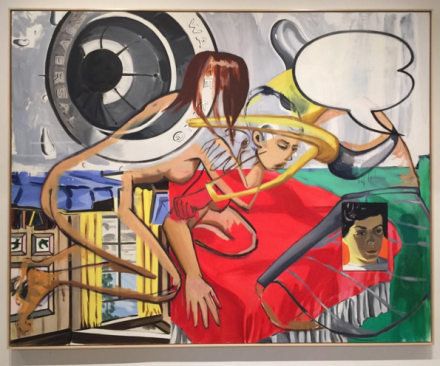 Work by David Salle at Unrealism, via Rae Wang for Art Observed

At Unrealism, the exhibition co-hosted by Deitch and Gagosian, figuration prevailed, with notably surreal bent. The collaborative exhibition, focusing on the human form and the traditions of interpretation and formal inversion that have informed the style over the past half-century, brought an impressively strong collection of works to the Moore Building, with vivid pieces by John Currin and Jamian Juliano-Villani among them. Of particular note was a recent Urs Fischer candle portrait, one of several sculptural works in the show, depicting restaurateur Mr. Chow (a Miami Beach staple). Just a few feet away, a new series of paintings by Richard Prince swirled with a stark spectrum of grays and whites, using his signature appropriated material in conjunction with jagged, surrealist lines.  This tone carried through the show, often using the format of portraiture and the human form as a jumping off point for explorations into the capabilities for painting in exploring the human conditions, and emphasizing limits of the human consciousness. 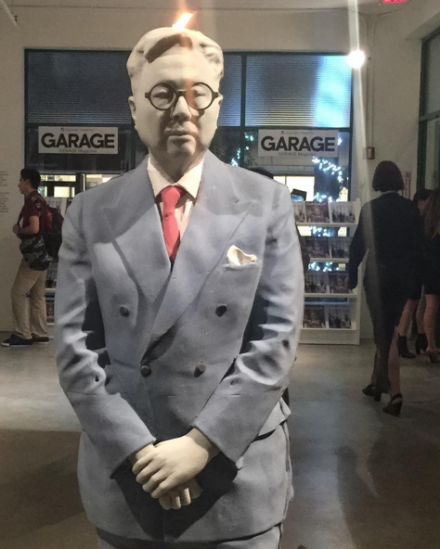 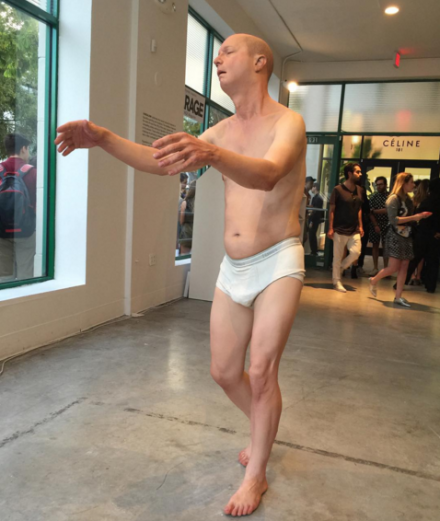 Next door, the ICA was also kicking off a new exhibition, focusing on the multifarious, ever-shifting explorations of video artist Alex Bag. Reprising the artist’s The Van in the ground floor of the space, the exhibition cut comically close to the bone with the early Basel crowd, with Bag playing a series of artists in turn, locked into conversation with their dealer over the planning of their exhibition at a major art fair. Mocking artistic aspirations in a whining, sing-song tone, the piece was a comical aside on the nature of the bustling fair week.  One floor up, an exhibition by Shannon Ebner offered a more subdued tone, featuring a series of the artist’s Black Box Collision A pieces alongside new works. 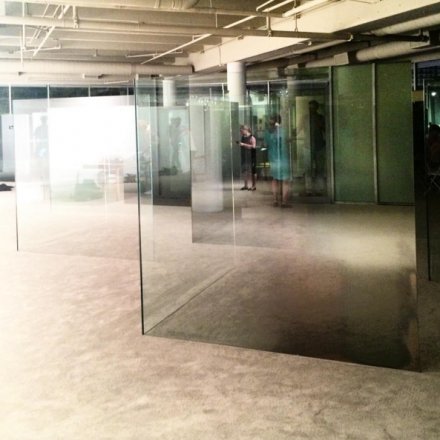 In another corner of the Design District, White Cube had taken over a space on the second floor of the Melin building for an installation of artist Larry Bell’s 6X6 An Improvisation. The work, recently shown in a similar version at the Chinati Foundation in Marfa, takes a series of freestanding glass panels, and uses their inherent reflectivity as a compositional point, using varied shades of the material to create illusory, overlaid reflections that warp and change based on the viewer’s perspective. Passing by the work, the parallel lines of the empty room would twist through each other or suddenly converge, while in others a more gradual movement of space could be detected. The work, made in response to the central axis of the room, played on contrasts of distance, bending reflections through its hazy series of surfaces. 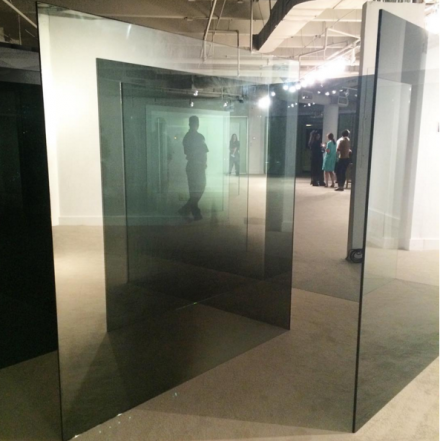 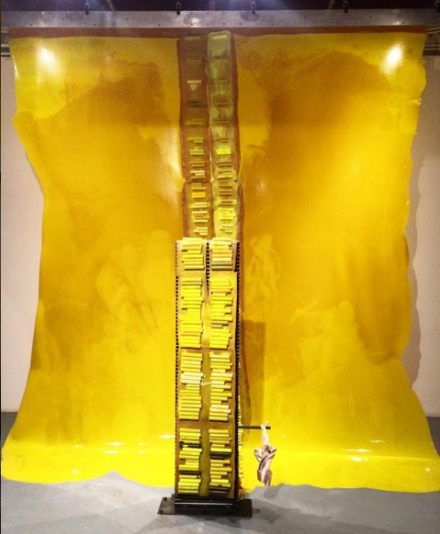 Several blocks away, Locust Projects was also hosting a reception for its exhibition of work by Martha Friedman, entitled Pore. The work, consisting of massive cascades of rubber, hung down from the rafters of the space and playing off the “four humors” that were a foundational cornerstone of early Western medicine. Played against each work was a series of brusque compositions, often executed in steel or other industrial material, which countered the dripping, implied fluids of the show with a more grounded, gleaming edge. Yet even in the artist’s counterpoint, a certain softness could be detected in the conversations between works, as pale, fleshy rubber draped over steel beams, or pooled over floor-mounted grating. Taken between her two material extremes, Friedman work here negotiates conceptions of the human form, stuck somewhere between its deep history and its more modern, industrial edge. The work’s central themes were emphasized by the performance taking place that night, where performers would labor against the elastic material, joining humors together in reference to various combinations of each element as the source of various maladies. 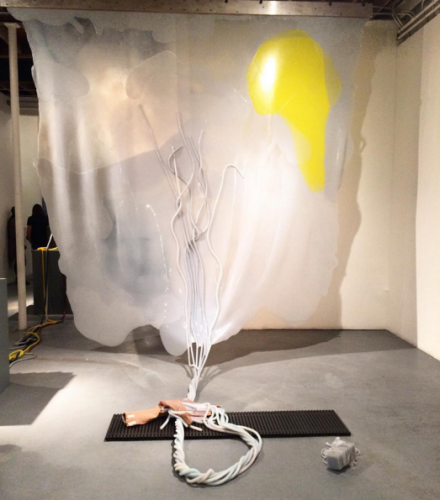 Following the shows, revelers decamped to Miami Beach for the first entries in the week’s thriving nightlife scene, highlighted by a performance from the Rodney Graham Band at The Miami Beach EDITION. Elsewhere, attendees at the White Cube’s gallery afterparty were treated to a performance by Giorgio Moroder, who also takes the stage later this week at the EDITION hotel. 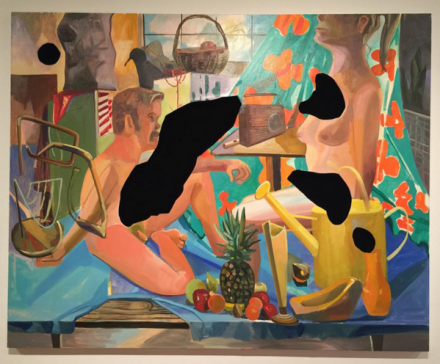 Work by Dana Schutz at Unrealism, via Rae Wang for Art Observed

This entry was posted on Wednesday, December 2nd, 2015 at 11:58 pm and is filed under AO On Site, Art News, Featured Post, Show. You can follow any responses to this entry through the RSS 2.0 feed. You can leave a response, or trackback from your own site.