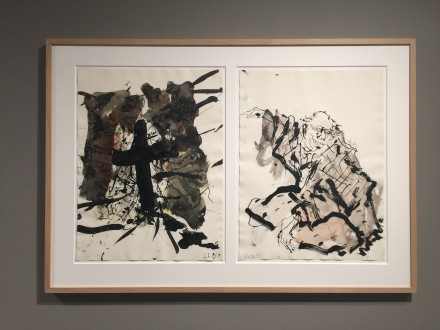 Intertwining his own personal artistic process with distinct threads of historical reference, wry humor and disparate aesthetic threads, Georg Baselitz is currently on view at Gagosian Gallery’s 980 Madison space for a small exhibition of new works, positioning the artist’s drawings and watercolors as a “visitation,” as the artist terms it, by Japanese ukiyo-e master Katsushika Hokusai. 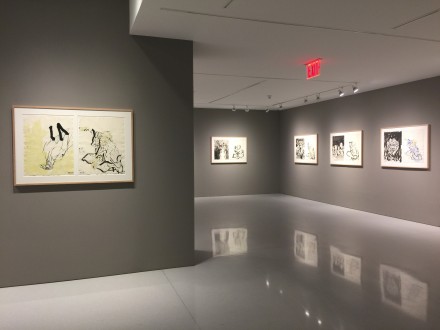 The exhibition takes Baselitz’s drawings, long a central aspect of the artist’s process (although often placed at the service of his large-scale paintings and explosive, paint-drenched compositions), and turns them towards a singular historical nexus, a hasty drawing by Hokuskai made in a letter to his publisher, which depicts the aging artist in a comically mischievous, irreverent self-portrait.  Turning towards his own mortality, Baselitz adopts Hoskuskai’s drawing, and puts it through a serious of expressive figurative variations, shifting the artist’s visage and pose slightly yet demonstrably from work to work.  In one, the artist appears as sinister and cackling, while in another, he appears to be frowning and angry.  In a third, the figure beams with a strangely enthused grin.  The lines, which hew closely to the original source material, still manage capture some of Baselitz’s raw energy, flitting in and out of the original model, and allowing for the alterations in the figure’s emotional state, while indicating Baselitz’s hand in exchange with Hokuskai’s own. 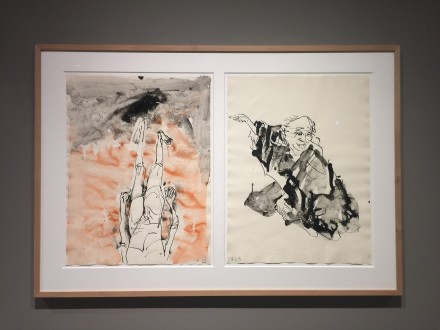 Adjacent to each sketch is a turn back towards Baselitz’s own aesthetic leanings: washes of watercolor countered by his own portraiture drawing, or explorations of the swirling, ghostly materiality of the paints themselves.  Selecting subdued, understated objects like his recent motif of upturned, seemingly suspended bodies over a colored-in ground, the works feel exceedingly intimate, as if they were pages ripped directly from the artist’s sketchbook or jotted down in an absent moment. 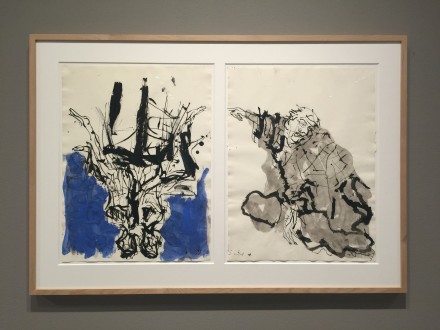 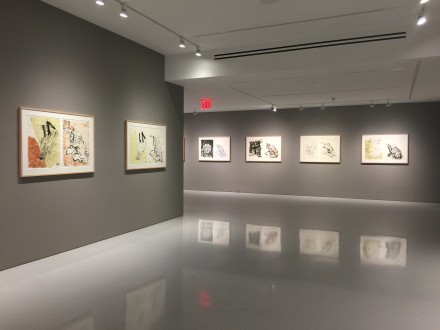 The use of the Hokuskai source material is an notable connection, as if the take on the aforementioned sketch turns into a coy signature for the artist, retaining the original’s light humor while indicating his work in connection with the original pieces.  Baselitz’s intimate sketches and delicately executed watercolors tip their hat to Hokuskai’s style in a sly interpellation of the artist’s own hand, at the same time that his signature translates the original through several centuries of art history and personal experience, and allows the Japanese master’s voice to echo through time into the present.

The exhibition closes on December 19th. 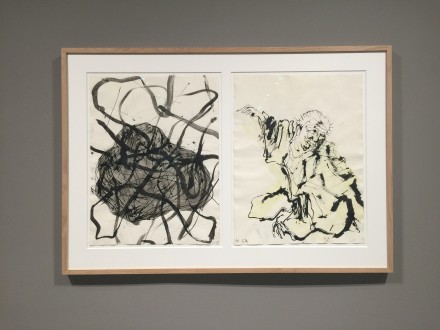 This entry was posted on Saturday, December 19th, 2015 at 12:00 am and is filed under Art News, Featured Post, Show. You can follow any responses to this entry through the RSS 2.0 feed. You can leave a response, or trackback from your own site.

One Response to “New York – Georg Baselitz: “Visit From Hokuskai” at Gagosian Gallery Through December 19th, 2015”