Moscow – Louise Bourgeois: “Structures of Existence: The Cells” at the Garage Museum of Contemporary Art, through February 7th, 2016 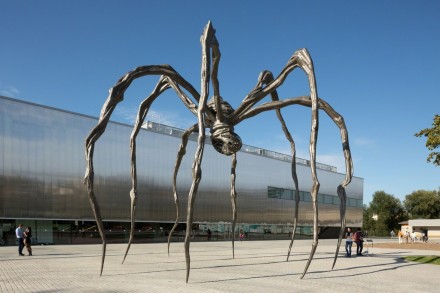 Organized by Haus der Kunst, Munich in collaboration with Moscow’s recently opened Garage Museum, Structures of Existence: The Cells is the largest presentation of the series Louise Bourgeois created in the last two decades of her life, shown alongside the early paintings and drawings which led to the development of her monumental pieces.

Upon arrival the viewer is greeted by Maman (1999), the staggering, defiant predator and protector in bronze, standing on eight gangly legs in Gorky Park’s Garage Square.  The awe-inspiring sculpture is a homage to Bourgeois’ own beloved mother, who was a tapestry weaver and passed away in her youth. Towering over nine meters high, her ominous form shields a mesh sac containing ten marble eggs below her abdomen.  The figure of the spider speaks to more universal anxieties beyond agoraphobia, representing a fear of being overwhelmed and overpowered. Maman can be viewee as much as a fear of the extraterrestrial, alien forces from dystopian science fiction as much as a scale reversal of a perceived domestic threat. 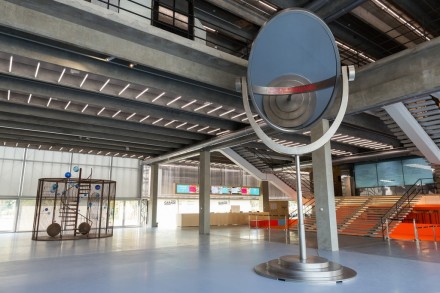 Louise Bourgeois, Has the Day Invaded the Night or Has the Night Invaded the Day? (2007), Courtesy Garage Museum of Contemporary Art, Moscow (2015). Photography by Egor Slizyak.

The museum within boasts at its main entrance hall the international debut of Has the Day Invaded the Night or Has the Night Invaded the Day? (2007), an exclusive part of the Garage’s Atrium Commission series.  The title of the work is taken from the artist’s diary entry on February 7, 1995 and is projected onto the glass. The gargantuan, self-standing bathroom mirror over 6 meters high pivots to reflect a miniature image of the viewer looking up, akin to a surveillance camera, yet self-directed.  Again reiterating the interplay of power and powerlessness in precarious balance, one could envisage the mirror turning on its axis as much as one senses Maman on the brink of launching into movement. 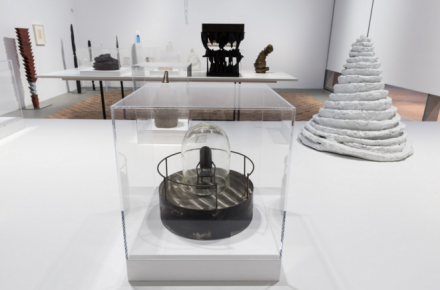 Bourgeois uses the mirror as an emblem of introspection and self-recognition, and it appears frequently in the Cells series, which are for this show ordered thematically rather than chronologically.  There are 55 works in this series, assembled from found objects and artifacts from daily life such as fabric and furniture, and hand crafted objects. These self-contained enclosures framed by metal cages are autonomous, synesthetic structures, exploring the elusive physical energies of the subconscious while beckoning to the voyeurism of the viewer.  “When I began building the Cells, I wanted to create my own architecture, and not depend on the museum space, not have to adapt my scale to it,” Bourgeois said, “I wanted to constitute a real space which you could enter and walk around in.” 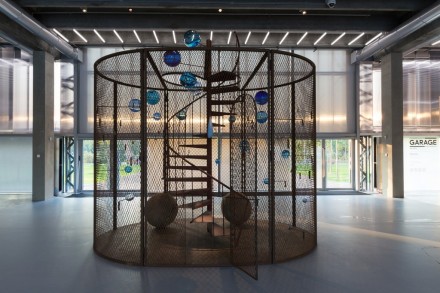 The tension between revealing and concealing, the intersection of private and public realms is a pervasive element in this series.  Cell (The Last Climb), from 2008 features a fragment of the spiral stairwell from Bourgeois’ studio, surrounded by suspended glass spheres that appear to support their own cosmological system. It’s hard to not to think of the Borgesian in Bourgeois, the dual sense of infinite expansion coupled with infinite compression. Her wavering between binary opposites and hermaphroditic sensibilities are perhaps best exemplified in her crafted sculptural objects, such as Fillette (1968). Both phallic yet feminine, disturbing yet gentle, delicate yet robust; the male genitals here could also be discerned as a female torso, capturing the fragility of human flesh while also strung up like a carcass in a butcher shop. 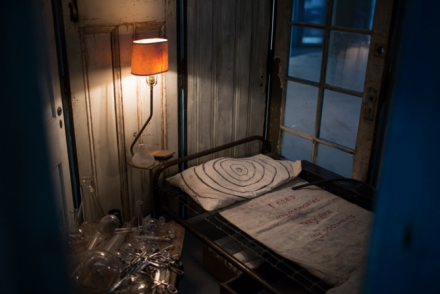 Vehemently vulnerable in her approach, Bourgeois used art to as a vehicle to engage vivid dreams, childhood memories, her father’s infidelities, her adult struggles with depression and insomnia, among other ailments.  Such poetic confrontations throughout her work subverted the male dominant art-world she operated within, while also maintaining her own points of differentiation without the anxiety of influence that so many artists carry with them today.

In another sense, this series offers a kind of antidote for often stultified viewing conditions in Russia, addressing an audience that vicariously experiences unlimited artistic and feminist expression as an importation from Western culture – literally and metaphorically through a cage.  Bourgeois could transform masculine into feminine, trash into treasure, private into public, or constraint into freedom. The Cells speak to the most pertinent and subversive freedom of all – that of the imagination.

This entry was posted on Monday, January 18th, 2016 at 2:40 pm and is filed under Art News, Featured Post, Show. You can follow any responses to this entry through the RSS 2.0 feed. You can leave a response, or trackback from your own site.