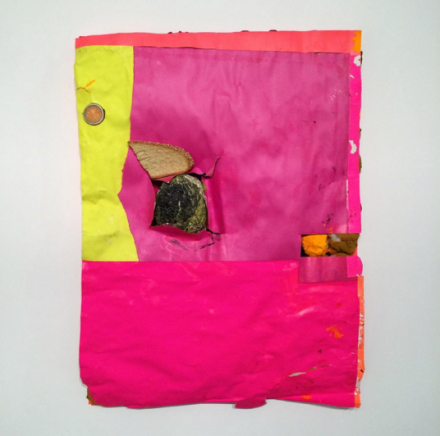 Walking into the doors of Moran Bondaroff in LA, the viewer is immediately greeted with a swarm of colors, massive chunks of colorful canvas often swelling into distended forms that only hint at their original, rectangular shape.  These pieces, the work of Brooklyn-based painter Brian Belott, make up his first exhibition in Los Angeles, as well as his first with the gallery. 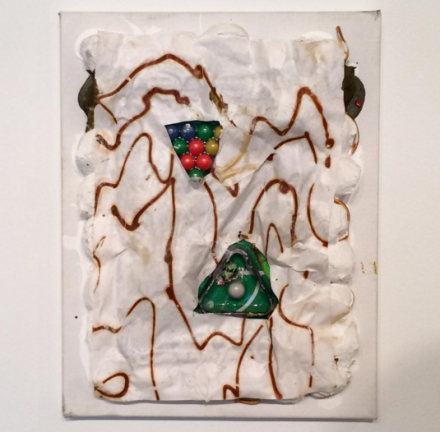 Fittingly titled Puff Pieces, Belott’s new series is burgeoning with material, bubbling up with injected cotton while outdated television remotes, pieces of fake bread, and other seemingly random selections dot the canvases’ surfaces, always countered with swirls of bright paint in starkly neon tones.  His work hints at comedy and satire, mocking the painterly gesture while emphasizing his own refined sense of space and composition.  Despite their hectic façades, it’s hard to ignore the sense of balance that Belott constantly situates in his pieces. 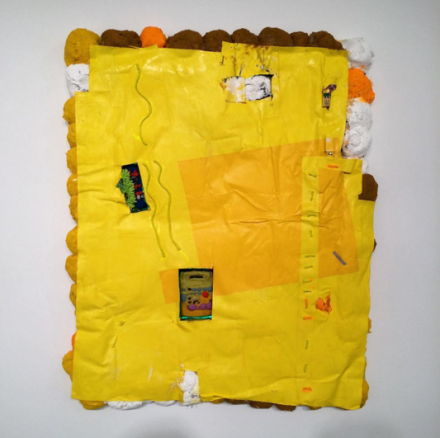 Belott’s project is tactile in the strongest sense, suggesting a constant pushing and pulling of material in addition to the sheer material agglomeration that ultimately creates the surface of the piece.  While the clumping objects of each work make for a fluid structural landscape, what really defines the pieces here is the sudden intrusion of heaps of foam, jutting through the canvas to imply depth and space beyond the object’s initial compositional frame.  Similarly, material is heaped onto the outer edges of many of these works, increasing their length and width through a slapdash method of prosthesis.  In each, the combination of these props and readymade fragments makes for a sense of the canvas as a less rigid, more permeable space, where the practice of painting has become something of a soft, porous form, much like the surface itself. 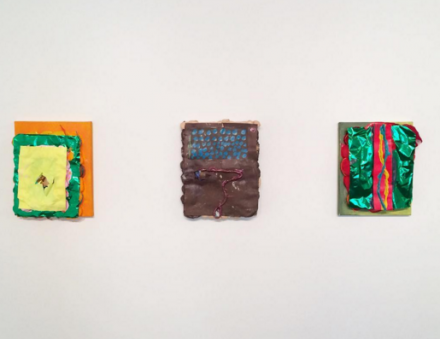 Through the process displayed, Belott’s work is something of a minimalism through maximalism, abandoning painterly compositional rules or rigid senses of depiction in favor of a pure study in accumulation and buildup.  His selections and repeat usage of remote controls or pieces of bread emphasize a certain deliberation in the Puff Paintings, yet their surfaces seem less interested in the respective elements used than their actual inclusion as gestures and uses of space.  While some are overloaded with objects and paint, the less busy pieces appear to study the visual impact of foreign objects in the same breath as their contributions to the spatial layout, both vertically and horizontally, of the work.  This sense of painting, not as reductive critique, but as a delimited, open framework, is what makes Belott’s Puffs so effective, and so enjoyable.

Puuuuuuuuuuffs is on view through February 13th. 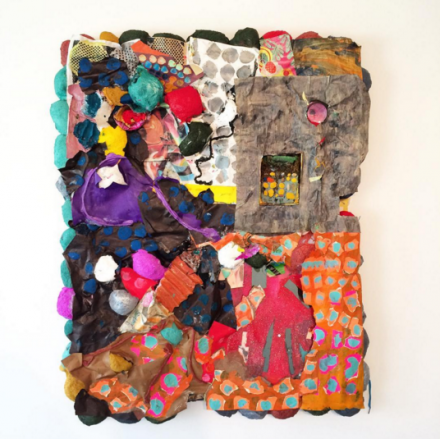 This entry was posted on Saturday, February 13th, 2016 at 4:17 pm and is filed under Art News, Featured Post, Show. You can follow any responses to this entry through the RSS 2.0 feed. You can leave a response, or trackback from your own site.