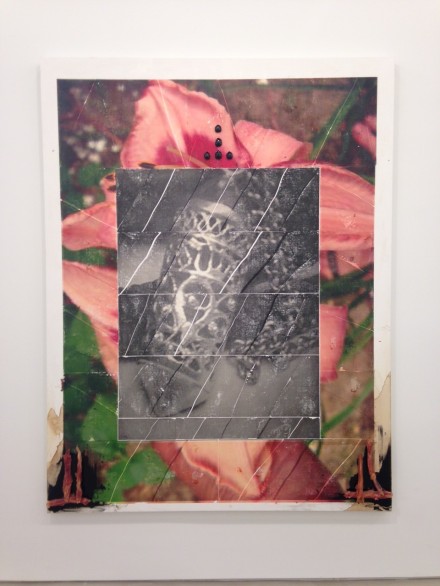 Greeting the visitors at the entrance to Lisa Cooley during Active Ingredient, a group exhibition curated by the gallery’s long time collaborator Alex Fleming, is Colette Lumiere’s Sleeping in a Glass Cabinet. Portraying the renowned artist, known for such sleeping performances from inside a glass vitrine during the 1970’s, this 1991 print vividly summarizes the content of the exhibition, delving into a material reinvigoration and transformation of works and their compositional elements through exposure to time and space. 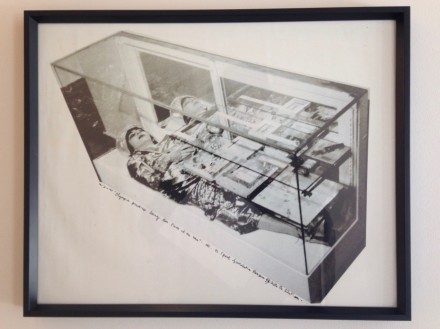 Formulated on the idea that each piece of art, when observed, interpreted and comprehended, becomes susceptible to metamorphism, the works on view underline the transformative façades and focal elements that result from varying lenses of perception and comment. Ryan Foerster’s c-prints, for instance, which he applied redundant everyday materials such as a mirror, pieces of industrial debris or chalk, translate into cathartic states when these materials are deployed from their utilitarian usage  in exchange for artistic realm.  Unpredictability springs from the use of arbitrary materials, and merges with other echoes of space and use in Borden Capalino’s mixed media collage Say Mr. Sandman, a large scale assembly of beef tendons, coffee, walnuts, enamel and resin. 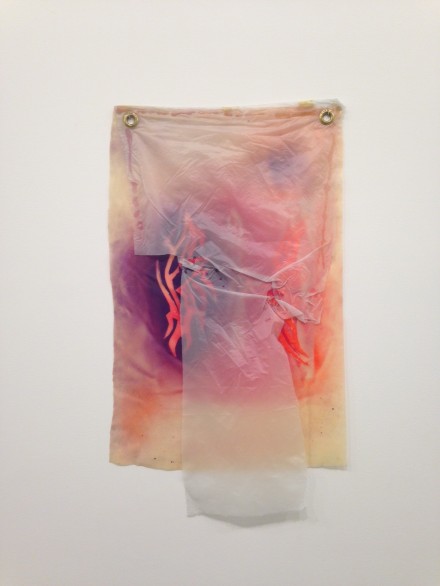 The exhibition’s ambitious checklist emphasizes on mixed media collages, including three dimensional ones, such as Jennifer West’s Marinated Flash Drives .MOVs, or ones that are on paper, like Marie Karlberg’s Cajsa.  A few sculptural pieces however, benefiting from their nebulous and quite bizarre expression, also spark attention.  Rachel Harrison’s Cashmere Woods, for instance, incorporates a wooden structure covered in cement, with canisters of cleaning liquids taped together. Encapsulated inside these kitsch looking tubes are the names of common brands, ephemeral chemicals allegorically resisting evaporation while detained around the wooden stick. 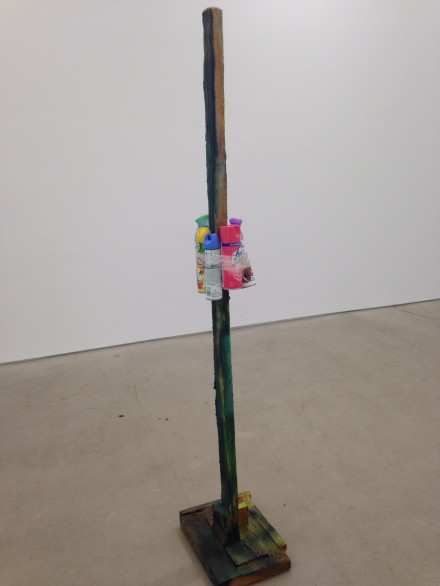 Accentuated employment of stray materials, to the extent that each item requires distinct consideration, is a strong thread in an exhibition that contemplates on distillation of elements.  Susan Cianciolo’s Royalty Kit, for example, is comprised of a handful of objects, among which are a variety of clothing, photographs, a Book of John, and burlap.  Mockingly everyday in its presence, the arrangement, laid out on the floor of the space, requires the audience to kneel down for the full experience of discovery. 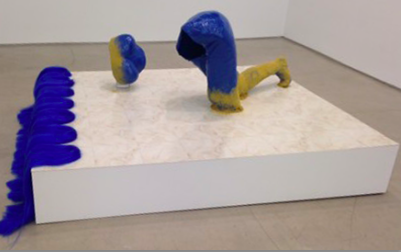 Turning this physical manipulation of the viewer back towards the work, Sadaf H. Nava’s Crawling/Fountain is an intriguing installation, unfolding its absorbing aesthetic only through a loop of physical movements and slight connections in each piece. Referencing figurative sculpture in traditional sense, this broad structure contains fake sand and synthetic hair in addition to vinyl and plaster, delivering an ephemeral narrative and buoyant arrangement of color and form.

Active Ingredient is on view at Lisa Cooley through February 14, 2016. 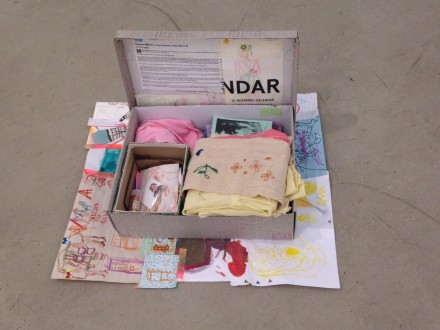 This entry was posted on Monday, February 8th, 2016 at 2:43 am and is filed under Art News, Featured Post, Show. You can follow any responses to this entry through the RSS 2.0 feed. You can leave a response, or trackback from your own site.