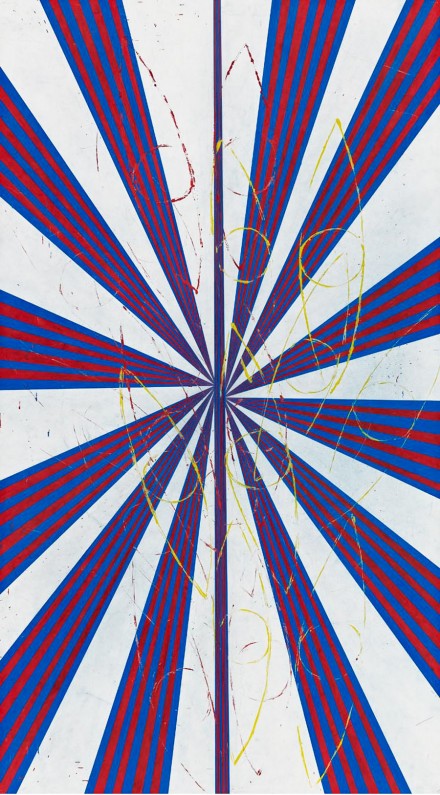 After exhibiting this body of work at Kaikai Kiki Gallery in Tokyo in 2010, Gagosian Gallery is presenting Mark Grotjahn’s ten part surrealist drawing exercise Untitled (Captain America).  The title of this show is a play on the original comic book series, where Captain America was intended to fight against the Axis Powers during World War II.  Seventy years later, the motif of Captain America is still significant and commonly used as a symbol of fighting for the American Dream.

With the motif and ideals of Captain America in mind, Grotjahn uses his abstract style to draw upon the comic-book hero using strong lines of symbolic red, white, and blue. His play with geometry is also evident as he transforms each panel using colored pencil into large (93 x 55 inches) compositions evoking strength and power through bold, design-influenced practice.  Geometry draws sharp rays with random, almost whimsical markings on top, along with an acid-yellow calligraphy that recurs throughout the work.  These lines are almost reminiscent of Dubuffet, in the works spawned after his travels to a number of sanatoriums in search of inspiration.  They are chaotic and sporadic, not meditated and precise as the accompanying rays of primary colors appear to be.  The markings and smudges disrupt each drawing as they are scribbled across the surface of each work, and introduce a sense of forced accident into compositions that more typically appear as controlled operations.

The framed rays are installed on one wall together and pull the viewer towards their space of influence.  They are bright and bold and reveal his studies of dense colored-pencil drawings with perspective investigations including  dual or multiple vanishing points.  Some of the techniques  has explored have been used to create illusion of depth and volume on a two-dimensional surface which give more life and dimension to his intimate drawings.  This investigation was originally played out in Grotjahn’s Butterfly series where he played with vanishing points and geometric forms using butterflies in order to give the illusion that the butterfly is receding, approaching, shrinking and more.  The artist’s goal in much of his work seems to be to play with the eye and trick the senses to believe that what they see is in fact before them and not a subtler reality engaging in a mind trick.

Mark Grotjahn’s exhibition is at Gagosian Gallery at 980 Madison Avenue on Manhattan’s Upper East Side through February 20th, 2016.

This entry was posted on Wednesday, February 17th, 2016 at 12:00 am and is filed under Art News, Featured Post, Galleries, Show. You can follow any responses to this entry through the RSS 2.0 feed. You can leave a response, or trackback from your own site.