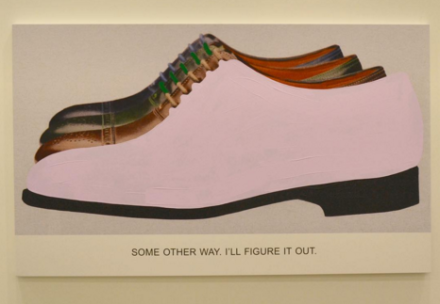 Sprüth Magers, the German gallery with outposts in Cologne, Berlin and London, has opened its inaugural Los Angeles exhibition with a show of new works by John Baldessari.  Located across the street from LACMA on Wilshire’s Miracle Mile, the new gallery boasts two floors of paintings, its street-facing windows covered in Baldessari’s iconic scrawl, “I will not make any more boring art.”  The sixteen works in the show do not disappoint, showcasing the artist’s trademark conceptual wit in a series of works emblematizing his interest in visual and textual modes of communication, artistic authorship and the notion of absence.  Having worked across a vast range of media and styles he states descends from Duchamp, Baldessari continues to explore the agency of the viewer in finding and defining meaning in his pieces. 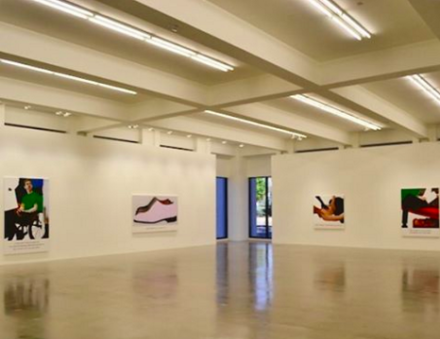 Pairing found film stills with seemingly random captions, Baldessari’s work on view interrogates the narrative potential of images and words, stitching them together in antagonistic disjunction to invoke the viewer’s own points of reference. The photographs, printed digitally on canvas, are painted over with blocks of color, at times aligned with the image’s internal orientation to mask specific objects or areas, or alternatively leaving small focal points to peek through. This colorful intervention with photography is not new to Baldessari, who has been positing bold geometric shapes over the top of images for several decades.  At once enlivening and muting the expressive power of the image, these compositions are testament to his interest in the idea of absence, by focusing attention on what has been left out, covered, or removed. Beneath these layered images are stenciled captions rendered in black type. Hand-painted, they nevertheless appear as printed text, showing no sign of the artist’s or sign-painter’s hand. Another hallmark of Baldessari’s work, this outsourced tromp l’oeil calls into question the notion of authorship, a theme that extends to the appropriated images themselves. 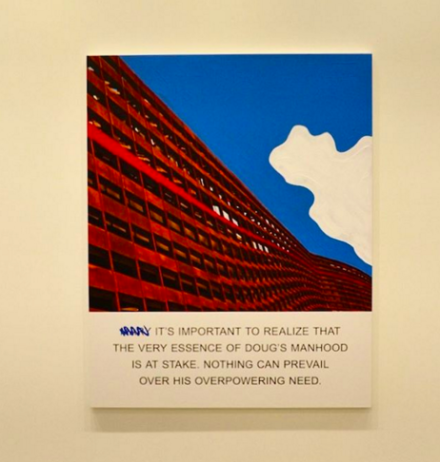 A photograph of a man getting a back massage from a strange trio of hands is accompanied by the subtitle, “Jones washes the windshield of his car,” while a man speaking into several microphones reads, “Julie climbs in behind the wheel and drives away”.  These quotes conjure their own visual images, seemingly at odds with the ones they append. The words lose their meaning, become hollow and silly without context or connection.  The viewer finds no resolution in their combination, despite temptations to attach meaning to their registration.  This abrupt pairing of such discordant messages exposes the interpretative modes of scrutiny and narrative construction throughout Baldessari’s practice.  As the viewer grapples with how to construct one’s own logic within the work’s narrative realm, interlacing their subjective visual and textual dualities, Baldessari unleashes meaning from its material bounds and undermines the legibility of the pictorial space. 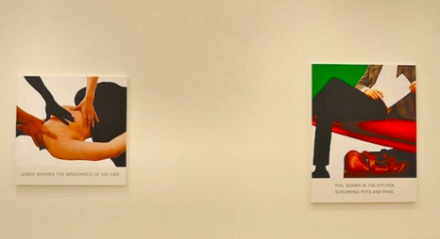 Sprüth Magers joins an increasingly long list of galleries opening posts in Los Angeles, where space, opportunity and a dearth of representation is quickly changing the city’s artistic landscape.  Baldessari, whom they have represented for over thirty years, and whose name is now practically synonymous with Los Angeles, was identified as the principle figure to inaugurate their west coast space. His extensive career in California and prominence as a deadpan conceptualist mark this debut with both history and humor, legacy and anarchy.

The show is on view through April 9th.

This entry was posted on Monday, March 21st, 2016 at 12:00 am and is filed under Art News, Featured Post, Show. You can follow any responses to this entry through the RSS 2.0 feed. You can leave a response, or trackback from your own site.