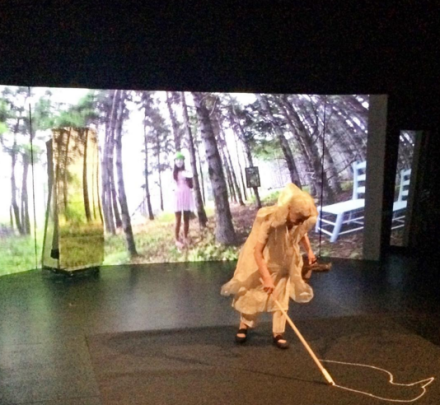 This week, Joan Jonas returned to The Kitchen to present They Came to Us Without a Word,” a reprisal and reimagining of her work from the U.S. Pavilion at the Venice Biennale last year.   Working closely with a group of schoolchildren, and featuring a live score by her longtime collaborator Jason Moran, the show takes her initial project, and moves it closer towards a standalone stage production, dwelling on her interests in fragmented media, interrelated histories and meanings, and human understandings of the world. 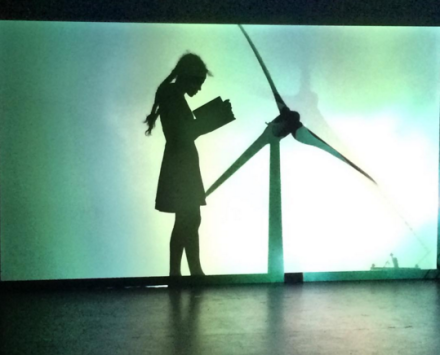 Jonas’s work is a flurry of narratives and structures onstage, compiling intricate, twisting narratives on the extinction of life and the transition of humanity from generation to generation into exchanges with both human and animal languages, each time balancing the two through literary fragments.  References to specters and ghosts abound, with the artist often reading from stories that capture strange, supernatural behavior and experiences.  In other video segments, she poses herself as a kimono wearing subject, winding through a miniature town set at her feet, and displaying the contents.  In other scenes, she twists, manipulates and moves archival images, photographs and drawings into concert with her performers onstage, or joins them wearing a series of peculiar masks. 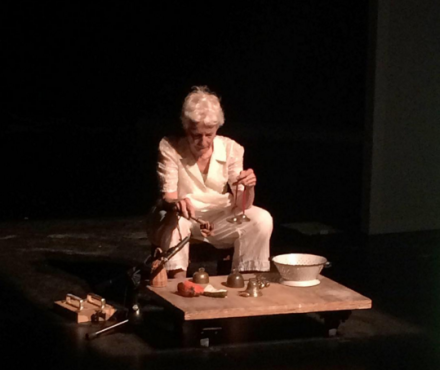 Yet for all of her narrative skill, Jonas is a master stylist, and her presentation here makes as much of its context as it does of it content.  The shifting uses of scrims, projection video and props create vivid landscapes of video, activated and altered merely by the interposition and movement of her actors across the floor.  In one moment, a pair of children chase the image of a seahorse with white panels, extending the height of the creature’s swim over the top of the screen with each successful capture.  Elsewhere, performers wind white panels across the stage, omitting others or changing the density and intensity of the projected light.  On the corners of the stage, angled  mirrors allow a view of the backstage as well, as if Jonas was making certain that there was nothing to hide, or rather, that the construction of the stage has nothing to do with a fictive space.  For this piece, the world itself is a fine enough setting. 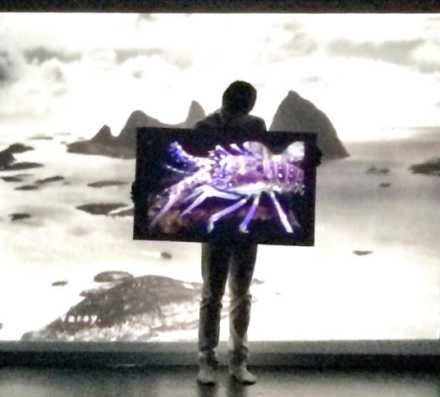 It’s these details and inversions that make They Came to Us Without a Word II such a striking piece of theatre.  The artist’s own presence, in conjunction with these young actors presents a striking dialogue, particularly in their varying degrees of tenderness and caution onstage.  As Jonas reads a script that tacitly references the Fukushima Power Plant meltdown, a child moves slowly across the stage, dragging a scrap of colored cloth.  In another scene, Jonas herself swirls an oar over the heads of the viewers, countered by a spiraling video behind her that feels equally breathtaking and dizzying. 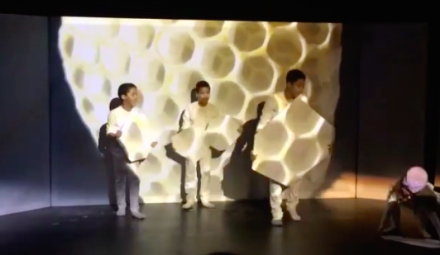 Taken as a whole, the piece manages great lengths with such a stripped bare concept and execution.  They Came To Us Without a Word is as much an elegy for a planet moving quickly towards catastrophe as it is a formal reverie in its own right.  Walking the line between the two, Jonas manages to get the best of both worlds.

The show concludes tonight at The Kitchen.

Read more:
Joan Jonas: “They Came to Us Without a Word II” [The Kitchen]

This entry was posted on Friday, April 8th, 2016 at 9:20 am and is filed under Art News, Featured Post, Show. You can follow any responses to this entry through the RSS 2.0 feed. You can leave a response, or trackback from your own site.