It’s not difficult to recognize a piece by Ken Price.  The artist’s fluid, winding sculptures and objects signal a high point of West Coast sculpture during the post-war era, an incorporation and reworking of Bay Area Funk priorities with the artist’s own sensibilities.  These influences and ideas are on view at Matthew Marks Gallery this month, as the artist exhibits a series of drawings from the early 1990’s. 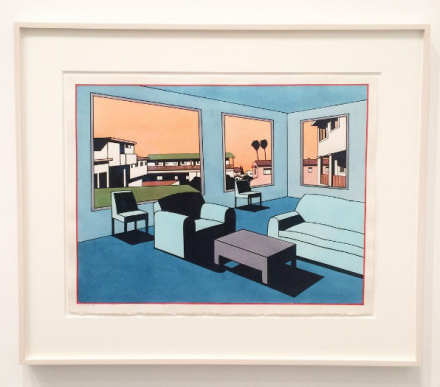 The work here alternates between comical scenes and restrained sketches, potential drafts for sculptural works or cartoonish scenes that could well have been pulled straight from the Sunday paper, yet with subject matter that remains distinctly intense and often fatalistic.  Car crashes are a returning theme, as are concepts of the prehistoric, the wild, and by contrast, the urban grid. 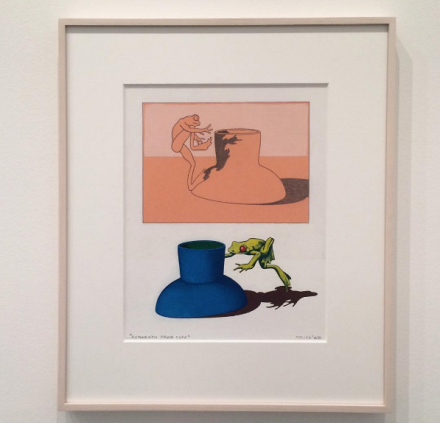 Price’s drawings here elaborate on the complex interior world that the artist seems to have built around or perhaps in complement to, his sculptures.  In one work Where Women Rule, a group of nude females cavort around a large, undulating form, as if worshipping the object’s twists and curves.  The object looks as if it had been drawn straight from Price’s studio, or perhaps was preparing itself to leap from the page and into the gallery space.  This relationship is reinforced in the second room of the space, where a single sculpture works in conjunction with a series of hung drawing, as if the space Price had created was designed to work as a series of reinforced shapes and forms, alternating between imagined worlds and concrete objects.

Elsewhere, the exhibition sees Price driving closer to reality, albeit a world reshaped through his own aesthetic lens. In one corner, a black and white landscape of Los Angeles rooftops and palm trees carries one of the most powerful visual caches of the exhibition, despite its small scale, while another work, showing an empty living room, feels charged with a tension born the era’s riots and smoggy gridlock. 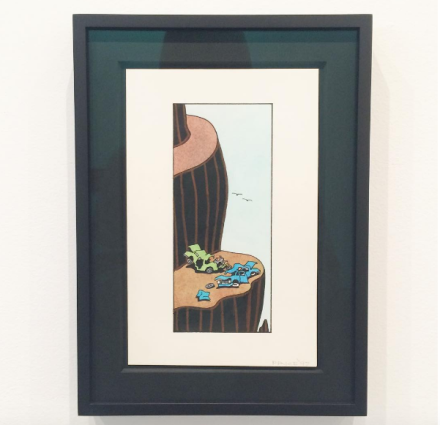 It’s this urban metropolis that serves as one of the unspoken stars of the show, as its cultural signifiers (sprawl, cars, highways, and palm trees), serve as the backdrop for meditations on violence, isolation and comical subversion.  While Price’s inventiveness with line and shape take up a majority of the works, it’s his sense of escape through form, of negotiation between urban decay and artistic imagination, that makes his work here so impressive.

Price’s work is on view through June 25th.

This entry was posted on Wednesday, May 25th, 2016 at 12:00 am and is filed under Art News, Featured Post, Show. You can follow any responses to this entry through the RSS 2.0 feed. You can leave a response, or trackback from your own site.