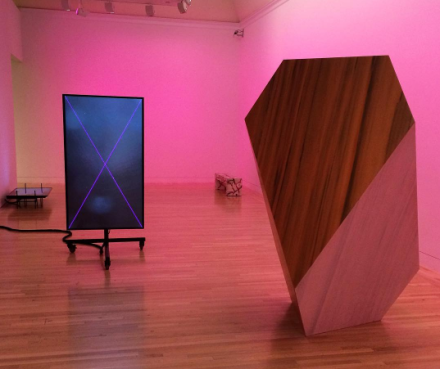 Shahryar Nashat at Made in LA (Installation View), via Art Observed

Currently on view at Los Angeles’s Hammer Museum, the third Made in L.A. Biennial is exploring the broad experiences and voices of the city’s thriving arts community, culling together a body of work running from digital subversions to more concretely conceptual work, each time underscoring ideas of interconnected and related experiences of the Southern Californian experience.  With a subtitle written by poet Aram Saroyan, the show is intent on exploring concepts of expanded work, where the contributions and performances of those on view spill over into the city, and state, more broadly. 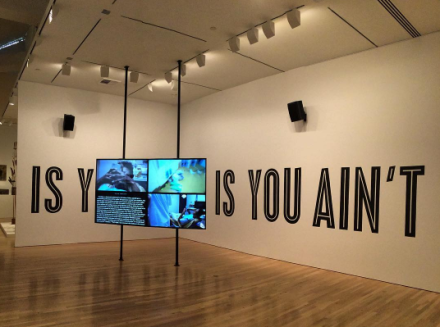 The exhibition runs through a broad series of twists and turns, dwelling less on any one concept or focal point in favor of a series of broader investigative procedures and cultural linkages, a point that fits quite well in consideration of Los Angeles’s own geographical and kinetic paradoxes.  As much as the city winds its way through various cultural hubs, communities and sceneries by way of its rolling highways and knotted intersections, it remains a series of isolated communities and tucked-away histories by the same forces.  The show’s approach to Los Angeles is, as a result, equally fraught, seeking a connecting element that has rarely appeared in full among Los Angeles’s smoggy sprawl.  There are interesting connections throughout, from the shared exploration of conceptual space between art and fashion, with clothing-based objects by Eckhaus Latta and Huguette Caland showing approaches from both ends of the spectrum towards a shared middle ground, to connections between the social critique and the circulation of the image with Joel Holmberg, Labor Link TV, and Mark Verabioff’s respective text, video and image-based works.  Yet in each the divergence of practice and subject seems indicative of LA’s often vague sense of cohesion, with each interest seeming distinctly separate in its political and aesthetic interests. 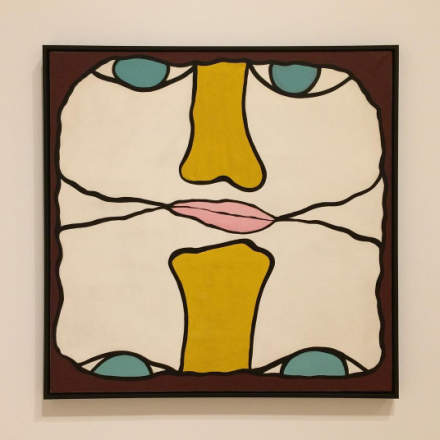 Nevertheless, the exhibition charts some impressive highs.  Caland’s broad series of selections affords her diverse output and unique brand of abstracted figuration the stage it deserves, and presents one of the more intriguing rooms of the exhibition, while Martine Syms’s single-channel video work and wall painting Laughing Gas makes marvelous use of space in its exploration of a mix of historical reference points performed in conjunction with the artist’s own on-screen persona. 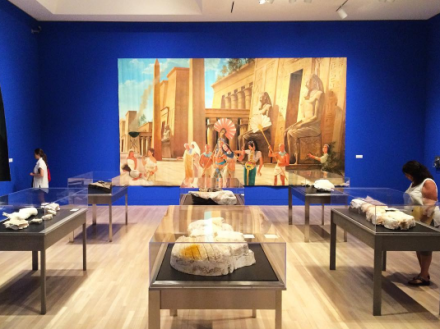 But the show is at its most successful when its artists’ investigations turn their attentions squarely on the city’s own internal conflicts and contradictions, its palimpsests of history and heritage, perhaps best seen in the strangely subdued project of artist Daniel R. Small.  Visiting the site where Cecil B. DeMille constructed his sprawling set for The Ten Commandments in Guadalupe, CA, Small excavated a broad selection of fake Egyptian statues, showing them alongside similarly themed wall murals formerly hung in Las Vegas’s Luxor Casino.  The result is a series of vitrines that mix archaeology and mass media, real excavation with the simulacrum so often associated with Hollywood and American pop culture more broadly, in a site where any line drawn between the two begin to break down.  Echoing the increasingly nuanced modes of artistic production in the modern era, Small’s piece works on the impressive duality of his location within the art field, allowing the indeterminacy and contexts of his subject matter to render a critique of both the image, and the systems that produce it.  More importantly, it is the cultural reproductions of the media industry that take center stage, the mirage of time and culture that LA is so often associated with. 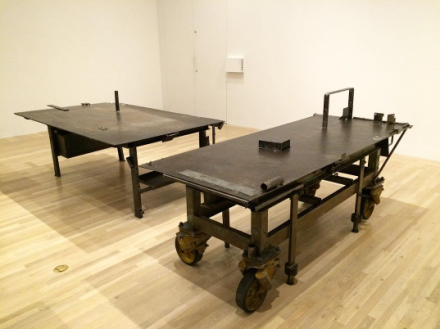 Sterling Ruby at Made in LA (Installation View), via Art Observed

There’s no easy answers when it comes to describing Los Angeles, and the Hammer’s exhibition manages to make this point one of its core takeaways.  Rather than a clear sense of the city, the smoky haze of its various locales, landscapes and histories becomes a central player in this show, with each work offering a momentary glimpse akin to a car flying past on the freeway.  In that sense, the show is a fitting entry in the multitude of cultural explorations of the West Coast metropolis.

Made in LA closes August 28th.

This entry was posted on Saturday, August 20th, 2016 at 9:02 pm and is filed under Art News, Featured Post, Show. You can follow any responses to this entry through the RSS 2.0 feed. You can leave a response, or trackback from your own site.