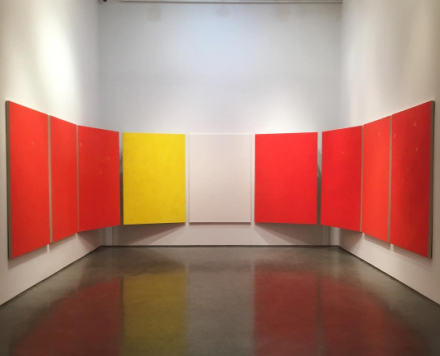 Taking over both of Marianne Boesky’s exhibition spaces on West 24th Street in Chelsea, Italian artist Pier Paolo Calzolari is currently showing a wide range of works exploring his specific interpretation of the Arte Povera movement, and his engagement with a broad range of materials that lend each of his works a notable sense of diffusive agency, allowing his chosen materials to function as both subject and object. 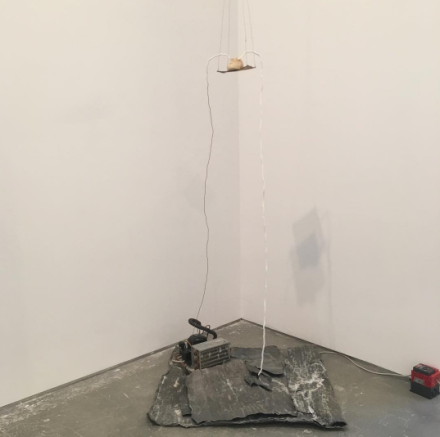 On view at 507 W. 24th, the artist is presenting a series of works in felt, impressively scaled works reaching heights of up to 1o feet.  Bearing scorch marks from repeated exposure to flame, the artist’s approach renders a dense series of variations in both texture and weight, twisting these fabrics into a replica of colorfield painting that functions by subtraction rather than addition.  The surfaces give off a cloudy aura, as if pulled down from the skies and stuck directly onto the wall, yet this sense of engagement with the image only strengthens the viewer’s awareness of its creation.  These are images lent a sense of context by the viewer, and the subtly visible traces of fire on its surface only double down on this optical illusion. 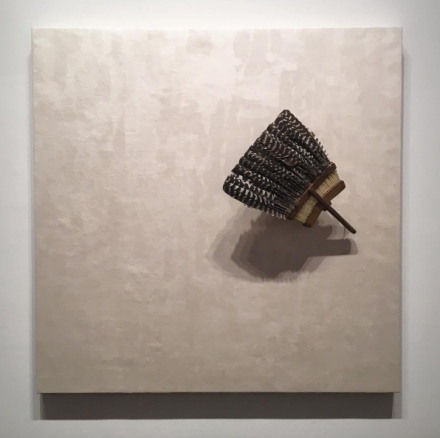 These pieces are countered by works rendered in lead, and embellished with burnt nuts, paper, and string, each addition carrying its own sense of narrative weight that ultimately continues the artist’s walking of a thin line between more direct approaches at immersion and conceptual engagement with the painted canvas.  This is perhaps best illustrated in one corner, where a visual system is established between a black frame and a vase placed before it, a branching line playing on the image as a real tree, springing from the pot.  This sensibility, keeping the relationship of image and artist in play, underscores Calzolari’s nuanced awareness of the art object in its exchange with the world around it. 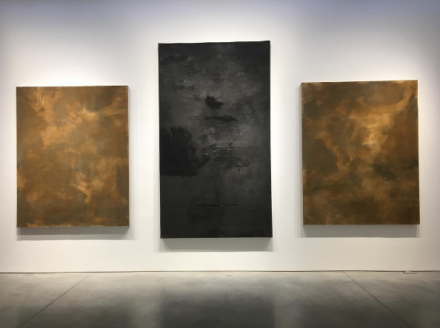 Next door, at 509 W. 24th, the artist is presenting a series of more subtly colored works, various monotone paintings occasionally punctuated by a lone readymade or momentary interruption of the canvas’s surface. Flower petals, stems, and in one case, even a broom, topped with feathers, make for subtle inflections on the surface of each work, yet seem to function in the opposite vein to the works next door.  These are elements pulled into the work itself through the strength of color, or the abstraction of its form into a more concretely aesthetic realm.  Rather than explore each element’s impact on the canvas, Calzolari seems to turn this function backwards here, showing how certain situations are more capable of working in reverse.

Taken as a pair, Calzolari’s bodies of work offer a nuanced exploration of the relationships between the image and the world depicted, allowing varied interactions of both sides to drive a delicately balanced conversation between both sides. 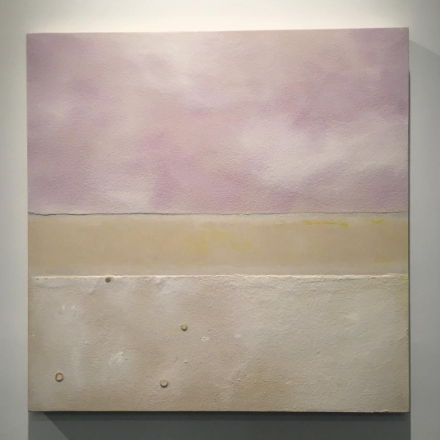 This entry was posted on Monday, March 13th, 2017 at 12:46 pm and is filed under Art News, Featured Post, Show. You can follow any responses to this entry through the RSS 2.0 feed. You can leave a response, or trackback from your own site.