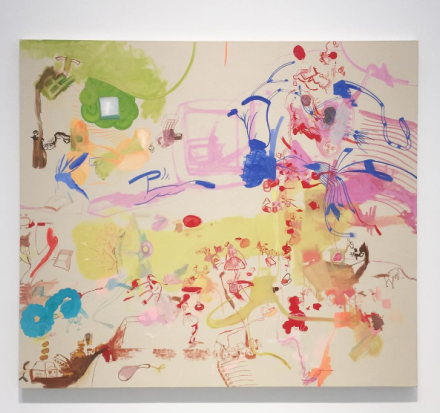 Currently on view at 303 Gallery, Sue Williams has brought a new body of paintings continuing her exploration of history and memory through the abstraction of both form and the painterly canon.  The exhibition, devoted to a handful of paintings and collages that trace the artist’s precise, and often humorously incisive approach to the American past, in conjunction with an incisive look at its impact on the female body. 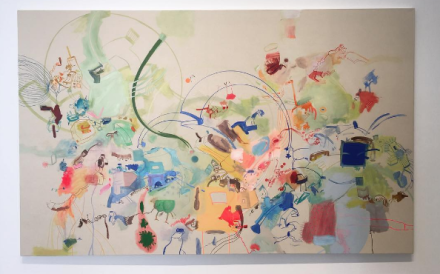 Williams’s work here continues her exploration of the body in conversation with gesture, allowing the human form to endlessly twist and warp through her multiple engagements with its lines and contours.    Female bodies spread languidly across the canvas, occasionally twisting out of sight, fading from view, or comically extending their limbs and feature.  Countered by textual interpretations and interruptions (one recalls televised cartoons while another reads only “Krappy Parenting,” each piece seems to teeter between worlds both real and imagined, dwelling on comic juxtapositions of the American suburban real and the Saturday morning cartoon marathons that populate the cultural landscapes of the domestic interior. 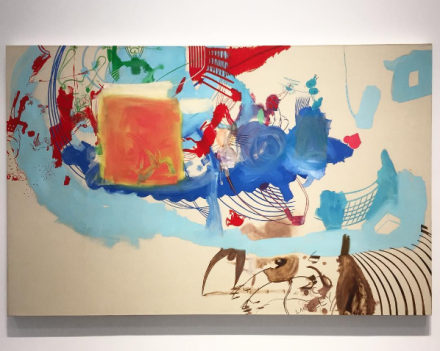 The female body is ever present, frequently distorted or manipulated as one of Williams’s recurring motifs.  In one, a nude form lays across the canvas, twisting and elongating as it moves out towards the horizon line.  Yet the form also shifts and evolves as the viewer’s eye follows it, particularly at one point where the model’s arm suddenly stretches away from the body and culminates in a roughly drawn tree branch.  Elsewhere, similar actions are illustrated, Williams tracing human forms gradually perverted and altered by their act of depiction. 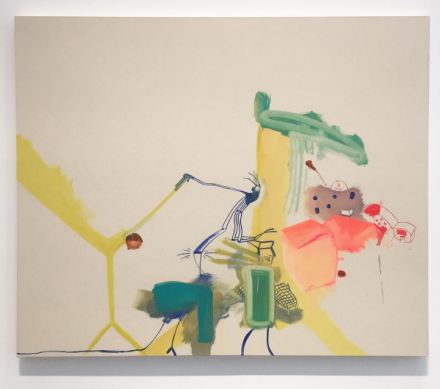 There’s also more resigned notes in Williams’s work this time around as well. Large expanses of open canvas are left to breathe, while other works draw on bold strokes of paint and large bands of color that offer a more classically abstractionist take on the canvas itself.  The combination of these techniques, in conjunction with her studied hand and formal sensibilities, allow Williams not only to expand her formal language.   Through her various gestural permutations, Williams is able to create sweeping abstract compositions, balanced by the inflections of figurative imagery that dots the swirling movements and clusters of paint she spreads throughout each of her works. 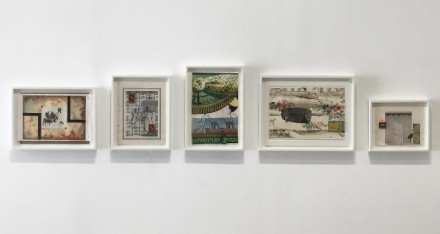 The exhibition also features a range of new collages by the artist, works that explore and elaborate on the constructs of the domestic, American history, and the deeper lines of cultural material that join them.  Images of Ronald Reagan, nude models or other icons are paralleled with curtain and wallpaper samples, creating subtle cognitive links between this imagined environment, while simultaneously amplifying certain emotional or historical notes within this engagement.  Exploring more concrete images and objects in these pieces, one gets an inclination of the motivating forces behind Williams’s painterly work, seeking to collide both the graphic content and deeper contexts on the work’s surface, a point that opens new space for engagement, conversation, and change.

The artist’s work is on view through April 14th.

This entry was posted on Tuesday, April 11th, 2017 at 1:12 am and is filed under Art News, Featured Post, Show. You can follow any responses to this entry through the RSS 2.0 feed. You can leave a response, or trackback from your own site.