Marking its entry in London’s final week of major evening auctions for the first half of 2017, Sotheby’s closed a small, 41-lot proceeding this evening in its Contemporary department, running through its offered works with impressive results and  steady bidding  that ultimately brought home a final total sales figure of £62,325,750 for the sale.  Bounding through its lots, leaving only works unsold, the sale offered a high note for the contemporary market’s continued strength. 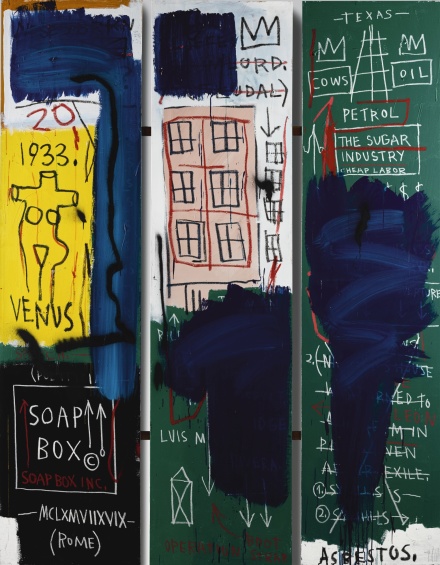 The sale’s early lots set this relatively speedy precedent for much of the nights proceedings, as early lots shot quickly to their estimated range and hammered shortly after.  A Josef Albers in the third lot was a rare exception, topping estimate to bring a final of £512,750, while a Donald Judd work in the next lot settled just under its high estimate for £1,148,750.  One of the evening’s top lots, Roy Lichtenstein’s Two Paintings with Dado followed close behind, settling just over estimate at a final price of £3,308,750.  Just two lots later, a Jean-Michel Basquiat piece from the peak of the artist’s career also just beat estimate at £6,492,500.

Only a few lots later, the Andy Warhol marquee lot, one of his early self-portraits, sold squarely within estimate for a final of £6,008,750, and a Richard Prince followed suit at £4,096,250.  Warhol’s collaborative works with Basquiat were also close behind, offering an intriguing variation on the sale’s pacing that saw the works, both drawn from the collection of Tommy Hilfiger, sell above estimate for £4,433,750 and £2,408,750 respectively.  A Gerhard Richter at lot 20 was also a strong entry, meeting estimate for a £3,871,250 final, while a Mark Grotjahn piece also sold near its high estimate for a final of £3,983,750.

The sale tapered off in the later lots of the evening’s sale, as those interested in bidding on the stars of the night slipped off towards the doors, ultimately bringing the sale to a close on a sporadic series of passes and underbid works that did little to dull the excitement over an otherwise strong outing for Sotheby’s.

The week concludes tomorrow with an auction at Phillips, rounding out the major auctions before the second half of 2017.

This entry was posted on Wednesday, June 28th, 2017 at 5:42 pm and is filed under Art News, Auction Results, Featured Post, Show. You can follow any responses to this entry through the RSS 2.0 feed. You can leave a response, or trackback from your own site.