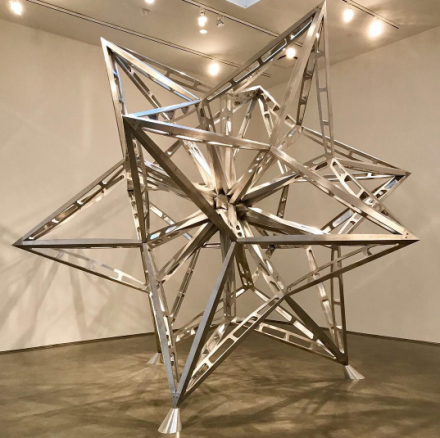 Marianne Boesky Gallery is currently exhibiting new work by artist Frank Stella, debuting seven large-scale sculptures created this year and underscoring the artist’s ongoing engagement with color, shape, and composition. Taking the shape of stars, ribbons, and bowties, these colorful sculptures activate and engage the surrounding space, and draw on an expanded history of Stella’s own formal language to give the works a sense of both vivid engagement with the sculptural language, and with his own creative evolution. 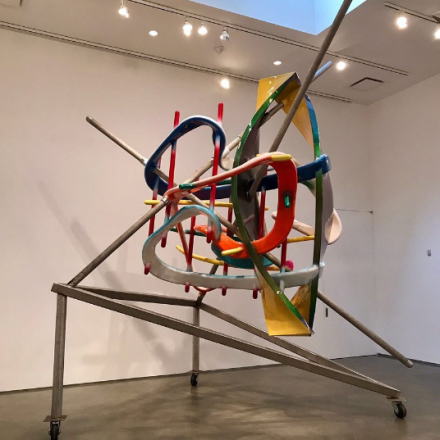 In the early 1960s, Stella’s work contributed to the Minimalist movement through his body of Dartmouth Paintings, a series of polygonal patterns that suggest an interest in the star shape.  The artist continued to reference this form throughout the following years, but it was not until his Scarlatti K works of the early 2000’s that his use of the star as a polygonal form became a central theme. At this point, the artist had begun working in three dimensions, extending his exploration of the abstract and the taking his interest in the behavior of shapes in space to a new realm.  In the Scarlatti K assemblages, the star appears repeatedly within a tangle of other shapes and forms that comprise these playful sculptures and wall reliefs.  Stella has dealt more directly and exclusively with the star motif since 2014, using digital modeling. These explorations range in size from the miniature to the monumental, and are composed of material from high-gloss chrome to wood. 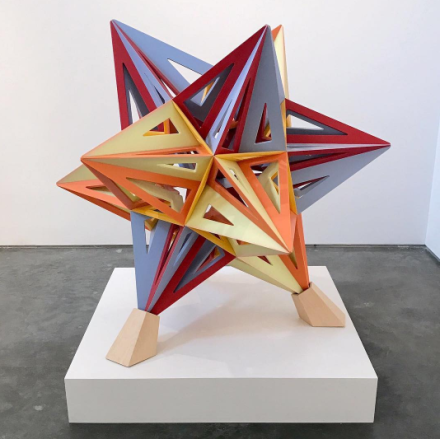 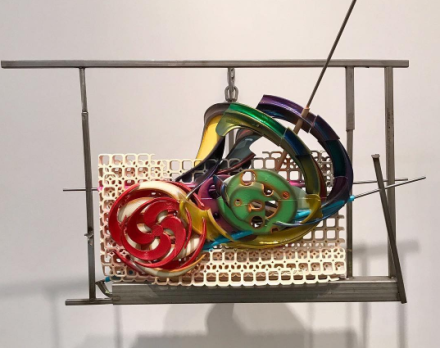 In Flat Pack Star, for instance, the star’s explosive form is represented in solid wood. A mathematical symmetry combines with an explosive multiplication of points, reaching in all directions. The shape is rooted to a stable foundation, paradoxically emphasizing the range of its expansion into space.

Another repeating form, the ribbon and bow, first appeared several decades ago, among other shapes and forms in the Protractor series.  In this series, the ribbon became an extension of the line, reflecting the brushstroke and bending and folding back onto itself. In the 1980’s, Stella transitioned to a more expressive approach, combining printmaking, painting, and sculpture in a manner that opened new experiences of the line’s curving, expressive capabilities.  This paved the way for his sculptures, assemblages, and additive constructions for which he is best known today.  In one work, Canadian Sunset, colorful forms encircle each other, forming a tangle of curved lines mounted onto an angular metal frame. The forms seem to wrestle in a whimsical juxtaposition of hard edges, straight lines, and soft colorful ribbons, and sits suspended in space, suspended by the invisible forces and pressures that surround it. 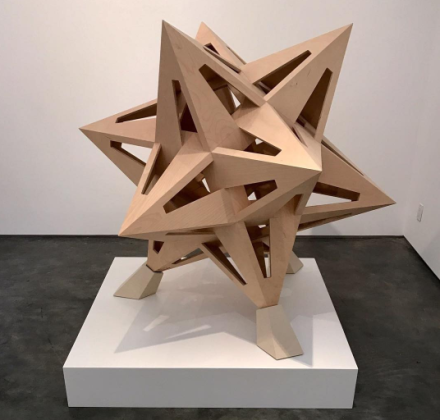 Over the past six decades, Stella has created a diverse and fascinating body of work. He has exhibited in the United States and abroad. His work was included in many pivotal institutional exhibitions that defined art in the postwar era. Frank Stella at the Marianne Boesky Gallery highlights the vitality and dynamism of the artist’s long career, while offering a precise and coherent vision of his current practice.

His new work is on view through June 17th. 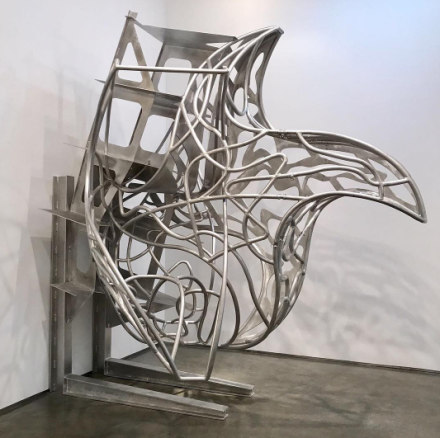 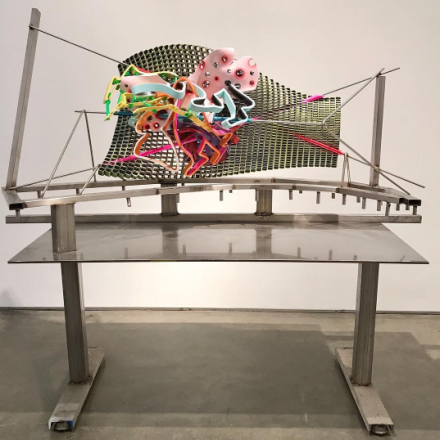 This entry was posted on Friday, June 16th, 2017 at 1:01 pm and is filed under Art News, Featured Post, Show. You can follow any responses to this entry through the RSS 2.0 feed. You can leave a response, or trackback from your own site.