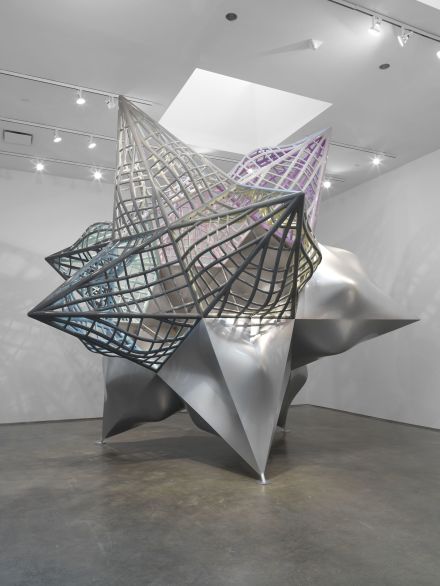 Currently on at Marianne Boesky Gallery, a body of recent sculptures by renowned artist Frank Stella presents an intimate look at the artist’s ever-evolving and innovative approach to form. Ranging from the monumental to attentively-rendered small-scalle works, the pieces on view underscore Stella’s ongoing exploration of the spatial relationships between abstract and geometric forms and the ways in which they behave in and engage with physical space. 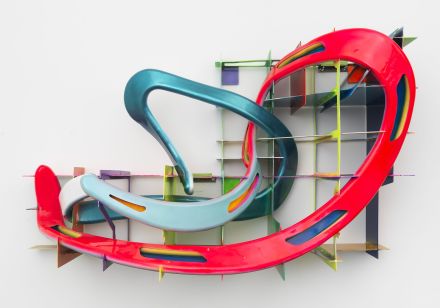 In these newest works, Stella combines interlocking grids with more fluid and organic lines, creating a dynamic interplay between minimalist and gestural visual vocabularies, and turning these interlocking, varied styles of sculpture-making into swirling orchestras of gesture and movement.  The use of line and depth, form and function hearken back to his early works as a modernist painter, and his interest in how these traditions can be set free from the picture plane, allowing gestures and colorful counterpoints to surge forth from the canvas.  The grid is always present in these works, serving as both a mounting structure and a formal backdrop against which much of his works are allowed to play on. In works like Atalanta and Hippomenes (2017), the rigid structure of the grid is broken by the application of large, billowing white forms that seem to weave and expand across the vertical and horizontal planes.  Elsewhere, works like Leeuwarden II (2017) see him turning the fiberglass grid into a jumping off point for a variety of elements,  each brightly-colored ribbon of material swooping in and out of its hard lines and mathematic logic, instilling a vivid sense of motion.  Texture and form, space and surface all work off each other, twisted through its various formal exercises into its final form. 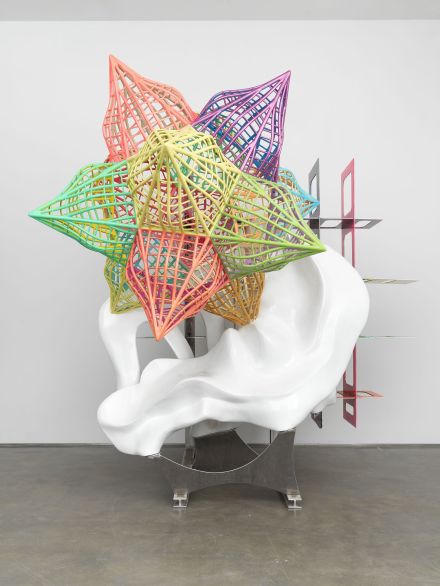 The artist also returns to the star in these works, a longtime graphical motif that dates back to early paintings during the 1960’s, yet here turn towards three-dimensional space to turn the works free. In his masterful piece Jasper’s Split Star (2017), Stella produces the form in monumental scale, turning his embrace of the grid into abstracted geometrical movements. The star’s sides, which are in parts gridded, push in and outward, oscillating in space to create complex curves, as if following an internal calculus that makes it endlessly immersive and complex. 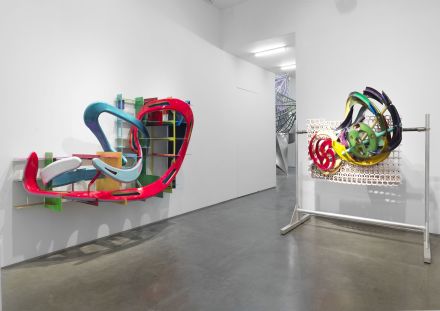 The artist’s abilities in this mode, working with the elements of his own aesthetic history to embrace increasingly complex manipulations of space hits a distinct high note here, setting his gestures free in a manner that both reflects his interests over the course of his career, and hints at limits in practice that the artist has yet to reach.

This entry was posted on Wednesday, May 22nd, 2019 at 5:39 pm and is filed under Art News, Featured Post, Show. You can follow any responses to this entry through the RSS 2.0 feed. You can leave a response, or trackback from your own site.