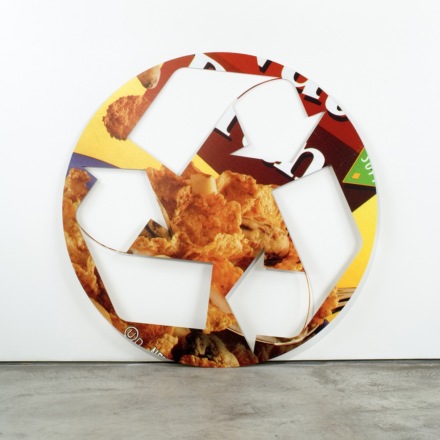 Exploring the convergence of varied aesthetic concepts and interesting overlaps between their artists respective practices, Paula Cooper Gallery’s summer show has opened, presenting a selection of sculptures and installations by Sam Durant, Liz Glynn, Walid Raad, Kelley Walker, and Meg Webster. Titled Non-Vicious Circle, the show draws its title and conceit from the 2014 mobile by Sam Durant on view. 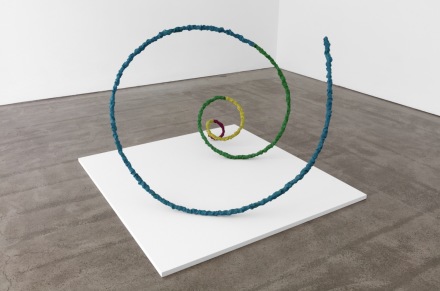 Playing on concepts of “recurrence,” the exhibition is particularly interested in the idea of repetition and the structuring of the event itself, working at just how historical linearity (or non-linearity) can be explored, reflected and understood through each artist’s work. In Durant’s practice for instance, the use of war materials, specifically missile and bullet shells, investigate the the relationship between Surrealism and World War I, the idea of the break with reality that surrealism delved so deeply into, and which the war did such an excellent job at propagating, the mass scale of violence abstracting reality from its participants to the degree that mass dissociation, “shell shock,” became a pathological condition. For Durant, this idea of the bullet’s flight, and the idea of violence as a pure abstraction from the daily experience of reality, becomes all the more potent in the wake of another two mass shootings on American soil. 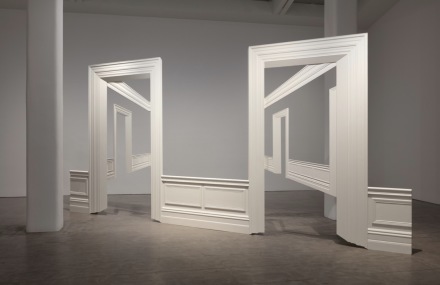 By contrast, Liz Glynn’s vibrant spiral, Eternal Return II, 2017, from her recent major exhibition at MASS MoCA, is made from contemporary materials and industrial detritus that translate theories of historical progression, visualized as graphs or charts—into three-dimensional forms scaled to the human body. And with his “recycling sign” works, Kelley Walker alludes to the continual transformation and re-use of “raw” cultural matter. These elements trace time in their own manner, the experience of duration as both linguistic and visual threads that rarely connect to the lived experience of time, or the sense of recurrence that a “trend,” implies. 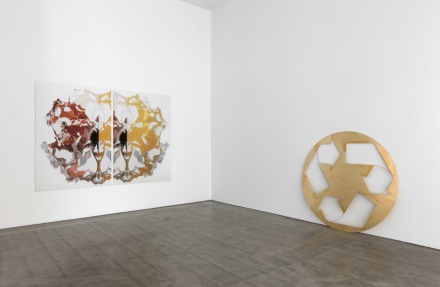 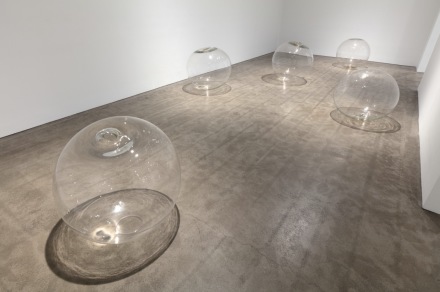 In a separate room, illuminated by bold spotlights and casting long shadows, Walid Raad’s monumental work Section 88_Act XXXI: Views from outer to inner compartments, 2010, recreates existing museum architecture (in this case, doorways from the Metropolitan Museum of Art) in a flattened and spectral fashion, as if the very architecture of the institution were suddenly emptied of volume and substance. With this and other works from his ongoing project, Scratching on Things I Could Disavow, Raad reflects on the current emergence of museums and other institutions for the arts in the Arab world – a development in many ways similar to the Gilded Age that saw the advent of the Met. Meg Webster’s Largest Blown Sphere, perhaps the most devoid of historical content in the exhibition, seems aglow in a poetic glory of translucence and form. Webster’s work, invested in the body and its own sensations of measurement, detaches her sense of history from concrete signifiers, instead delving into pure form, and its experience, as a mode of understanding history.

This entry was posted on Thursday, August 8th, 2019 at 2:54 pm and is filed under Art News, Featured Post, Show. You can follow any responses to this entry through the RSS 2.0 feed. You can leave a response, or trackback from your own site.