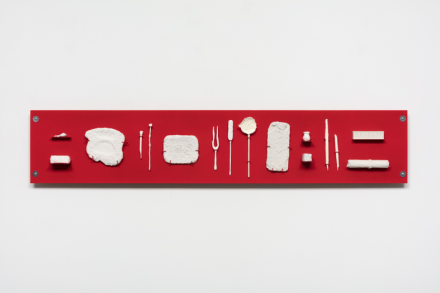 Over the course of the last few years, artist Liz Glynn has explored techniques in the production and presentation of technological objects and tools, seeking to explore and understand how disparate pieces and parts of a cultural milieu, particularly the tools used to construct, them, might provide a richer understanding of the culture itself. A sort of self-styled archaeological proposition, Technological Tools, as Glynn calls them, take center-stage at her current exhibition at Paula Cooper in New York, now on view through October 12th. 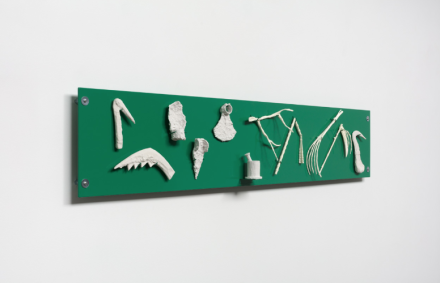 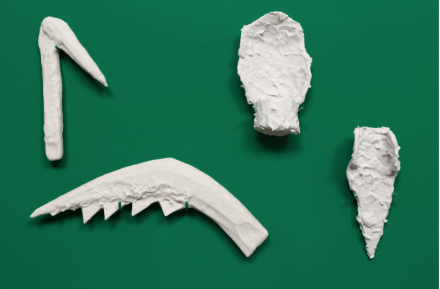 For the past decade, Glynn has worked in sculpture, installation, and performance, examining the ways in which cultural objects of the past embody or confront power dynamics, social structures, and systems of value. This particular series takes this concept directly to early technological power, the roughshod tools and early implements employed by man to remake the world around him. In each of the works on view, a set of related gypsum objects are mounted to a powder-coated steel panel. Primitively sculpted by hand out of paper mache, scanned, and output with a 3-D printer, the ghostly white tools appear in stark contrast to their high-chroma, polished backings. Glynn poses herself as both historian and philosopher here, posing various technologies, value systems and concepts within single spaces, allowing the viewer to pass through varied eras and ideas within a single piece. Titled with infinitive verbs emphasizing action—such as To Sow, To Cut, or To Write—the works categorize tools, which date from prehistory up to the industrial revolution, according to purpose or methods of productivity. Resembling ossified specimens in a display case, the series invites deliberation on the uncertainty of objects, labor, and authorship in the increasingly virtual world. These conversations open up onto the commonality of desires, and the human ingenuity that blossoms from a state of need. 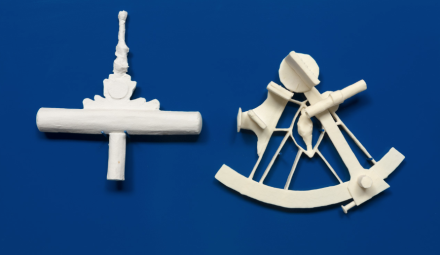 Bearing evidence of their handmade beginnings, the unique works serve as an extension of the body, exploring subjectivity in artistic production. The tools here are produced through 3-D Printing techniques, and as a result bear their own marks of imperfection and manufacture. Displaced from their intended functions, the objects become ghosts of their prior forms, abstracted even from use as a result of their aesthetic undermining and their state rendered useless by display. In the wake of digital commerce, robotic manufacturing, and the rise of the service sector, these tool racks emphasize a new mode of making, and a displaced sense of the history of labor.

This entry was posted on Monday, September 23rd, 2019 at 4:47 pm and is filed under Art News, Featured Post, Go See. You can follow any responses to this entry through the RSS 2.0 feed. You can leave a response, or trackback from your own site.