January 24th, 2022
REFERENCE LIBRARY
Home » RIP: Christo, Who Worked on a Monumental Scale, Passes Away at 84

RIP: Christo, Who Worked on a Monumental Scale, Passes Away at 84 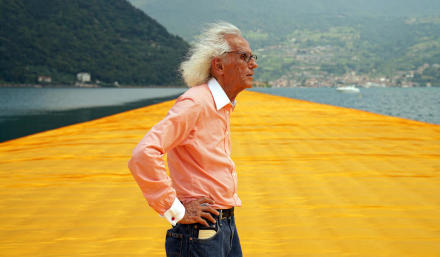 Christo, the Bulgarian artist known for massively scaled environmental works that spread miles of fabric and other materials across natural landmarks and buildings at sites around the globe, has passed away at the age of 84.  Working for much of his life alongside his late wife, Jeanne-Claude, who passed away in 2009, the artist’s iconic pieces, like 2005’s The Gates in New York’s Central Park, or his wrapping of the Reichstag in Berlin, turned modern locales into subtle, surreal echoes of themselves.

Born June 13th, 1935, Christo Vladimirov Javacheff would study in Communist Bulgaria during the years following WWII, working on propaganda projects that would inform his work and process in dealing with a range of people both inside and outside of traditional arts-institutional spaces.  Fleeing the Soviet forces, he would end up in Paris, where he met he met his future wife, Jeanne-Claude Denat de Guillebon.  Moving to New York after several years working in the Parisian arts scene, the pair would develop increasingly complex and elaborate pieces, building massive curtains and fabric screens over natural environments in the United States and abroad.

By the 1990’s the pair’s language had reached a simple, elegant mode, perhaps best demonstrated by the arresting beauty of their project wrapping Berlin’s Reichstag in massive folds of fabric.  He would continue to create elaborate pieces in the U.S. and abroad, and was completing plans to wrap Paris’s Arc de Triomphe, which will be completed next year.  “Christo and Jeanne-Claude have always made clear that their artworks in progress be continued after their deaths,” a statement announcing the artist’s death reads.

The artist is survived by his son, Cyril Christo, a wildlife photographer, as well as his brothers Anani and Stefan, alongside his grandsomn and two nephews.

Read more:
Christo, Artist Who Wrapped and Festooned on an Epic Scale, Dies at 84 [The New York Times]

This entry was posted on Monday, June 1st, 2020 at 1:00 pm and is filed under Art News, Featured Post, Obituary. You can follow any responses to this entry through the RSS 2.0 feed. You can leave a response, or trackback from your own site.