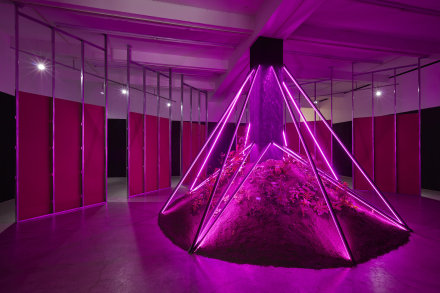 On view through the end of the month at Sikkema Jenkins & Co., artist Marlene McCarty has orchestrated an impressive multi-disciplinary installation, Into the Weeds: Sex & Death. Delving into the titular subject through a range of materials and works, the show centers on a selection of new, large-scale drawings as well as a set of gardens and composting structures spread across the gallery, including a dumpster-based garden installed outside the gallery. 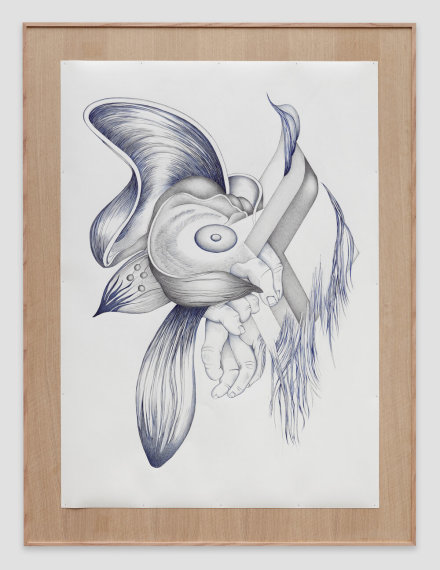 McCarty was a member of the AIDS activist collective Gran Fury and was the co-founder of the transdisciplinary design studio, Bureau, alongside Donald Moffett. Embracing a similar approach towards the body, twisting its various fragmentary pieces into a new mode of surrealist critique, McCarty’s work has long served as a striking interrogation of sex and gender, politics and society, and here extends that interest across conceptions of the life-cycle and the strategies of living in modernity. Using everyday materials such as graphite and ballpoint pen, her work focuses on representations of the female body, femininity, and its position within familial and biological systems, subjects depicted engaging in unorthodox or transgressive social formations, breaking down the traditional, accepted interactions among humans and other species, as well as between humans and nature. 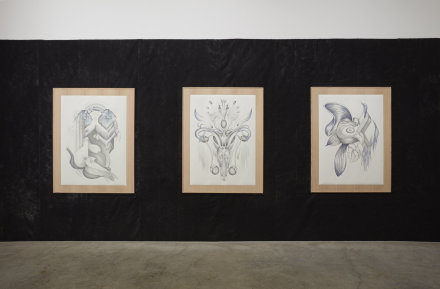 This practice extends out into the realm of plant life, underscoring the history of plant use for both toxic and healing utilities. In her works, meticulously shaded limbs and flowers interlace one another, mirroring each other’s shape with the curl of a finger or the droop of a petal. This interplay of human body and plant is disrupted by various symbols alluding to a hegemony of white western culture: a Civil War ball gown, cowboy hat, and fragments of Modernist architecture, including the honeycomb-esque Vessel at Hudson Yards. Within these chimerical gardens lies a contentious ecosystem, constantly negotiating the power dynamics across gender, race, health, and history. \ 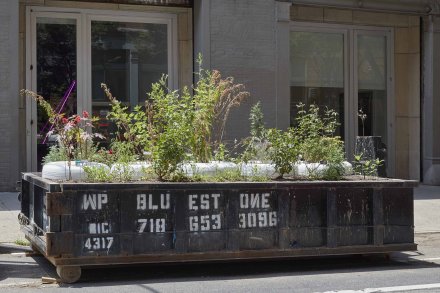 The external component of Into the Weeds features a garden installed in a low profile dumpster at the gallery’s entrance on West 22nd Street. As part of the original exhibition presented and organized by UB Arts Collaboratory, McCarty cultivated a composting site and permanent garden within the complex of decommissioned grain elevators at Silo City in Buffalo, NY. Like the paradoxical effects of botanical healthcare, the compost pile itself is a site of contradictions, fertilizing new life through decomposition. To take space for it in the public realm can be seen as a statement of reclamation, the recuperation of terrain in the name of local autonomy.

This entry was posted on Friday, July 30th, 2021 at 12:15 pm and is filed under Art News, Featured Post, Show. You can follow any responses to this entry through the RSS 2.0 feed. You can leave a response, or trackback from your own site.