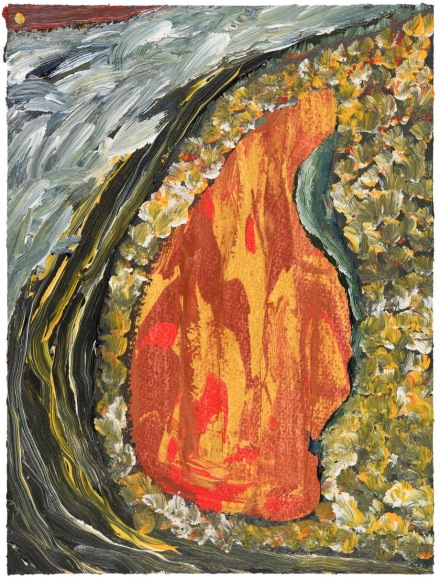 On view this month at Cheim & Read, the late Matthew Wong is the subject of a targeted, curatorially minded show dwelling on a body of bright, colorful works the artist produced during a 2016 stay in Los Angeles. This is Wong’s second solo exhibition at the gallery, which follows Matthew Wong: Footprints in the Wind, Ink Drawings 2013–2017 (May 5–September 3, 2021), a suite of works that charted the artist’s exploration of ink wash on rice paper, materials traditional to Chinese landscape painting, some of which he began while living in Hong Kong and working in Zhongshan, China. 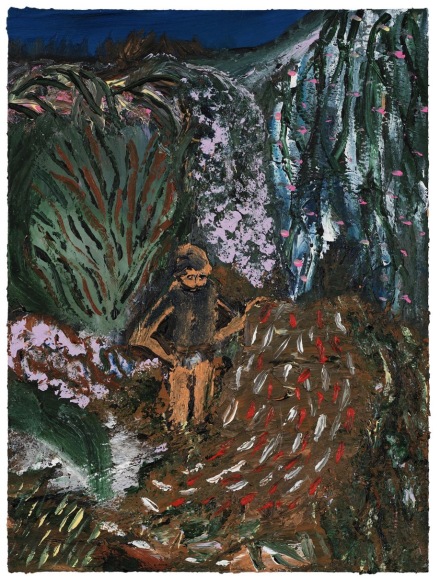 This selection on view, however, differs markedly from those widely exhibited during the artist’s lifetime. Instead of the blues which have become virtually synonymous with the artist in the public imagination, the palette and textures of these paintings reflect the super-heated atmosphere of Los Angeles, where a teeming metropolis collides with the harsh natural landscape: the Pacific ocean, mountains, and desert. Wong, a Canadian artist who was born in Toronto in 1984 and lived and worked in Edmonton, made these paintings in 2016 during a three-month stay in Los Angeles, the last stop on a visit which included New York and Michigan. The brushwork is loaded and expressionistic, revealing a distinct and compelling aspect of Wong’s practice. In one image, a man and a woman copulate on the beach under the stars. Other paintings are startling in their simplicity, with mountains, sea, and sky distilled to their essence. Some compositions are clustered with information, with nude figures walking through jungle-like settings, while others are spare, even stark, as in Infinity, where a lone grisaille figure wanders along an empty highway receding to the horizon. 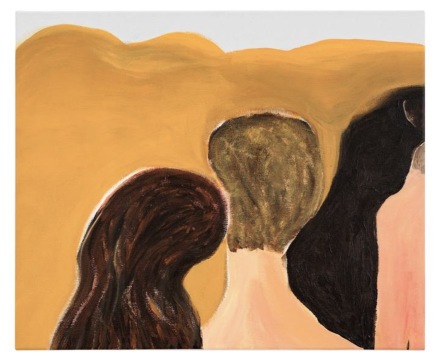 The human body is similarly abstracted, such as the columnar torso of Boyhood, or the amoeba- like heads in The Desert. There are also striking views of interiors, redolent of the artist’s love of Henri Matisse and David Hockney, with windows opening to the outdoors or offering glimpses of private lives within. In other works, Wong transforms the casual hedonism long associated with Los Angeles into lyrical evocations of the figure in the landscape, a 21st-century Arcadia echoing the idealized images from 17th-century French painting, where naked humanity and nature coexist in timeless harmony as in a Garden of Eden. 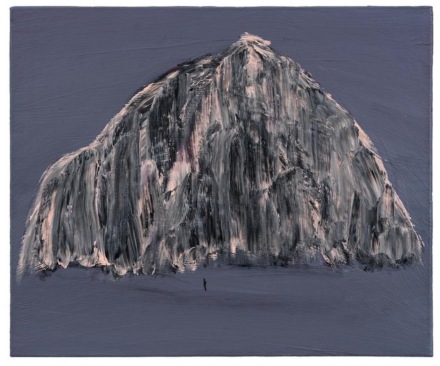 Throughout, the vivid use of color and the artist’s enigmatic approach to the depictions of his chosen subjects shines through, making this a rare and important opportunity to see the artist’s work from a rarely seen but significant era of his too-short career. The show closes September 10th.

This entry was posted on Wednesday, September 7th, 2022 at 11:44 pm and is filed under Art News, Featured Post, Show. You can follow any responses to this entry through the RSS 2.0 feed. You can leave a response, or trackback from your own site.