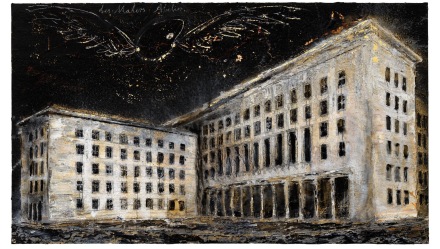 Marking a new entry in an enduringly challenging and iconic body of work, Anselm Kiefer has opening a show of works at Gagosian in New York, continuing his work in monumental canvases that blend commanding landscapes and structures with a wide range of other materials including terra-cotta, fabric, rope, wire, found objects, sediment of electrolysis, and metal—including copper and gold leaf. Mixing the abject and the exalted, these works are imbued with gesture, a sense of metamorphosis, and alchemical symbolism. 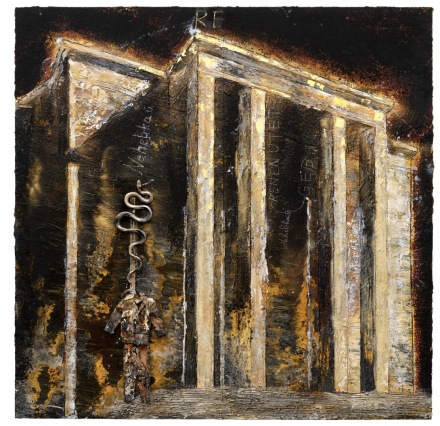 The exhibition in New York features paintings of monumental buildings and ruins. Their architectural symbolism is permeated with themes found in Exodus and developed by writers who have long inspired Kiefer, including Paul Celan and E.T.A. Hoffmann. Danaë (2016–21) anchors the installation, fusing a representation of the vast interior of Tempelhof Airport in Berlin with the ancient Greek myth of Zeus transfigured into a shower of gold, leading to the prominent use of gold leaf in the painting. The storied site was built in an area belonging to the Knights Templar in the Middle Ages, opened as an airport complex in 1923, was developed extensively under the Third Reich, and played a critical role in the Berlin Airlift during the Cold War. Significantly, the decommissioned facility was recently used to provide temporary shelter for refugees, connecting it to the themes of Exodus. Other buildings represented in the paintings include Montecassino Abbey in Italy; Albert Speer’s Zeppelin Grandstand in Nuremberg, Germany; and Louis Kahn’s Institute of Management in Ahmedabad, India—all historically and culturally resonant structures. 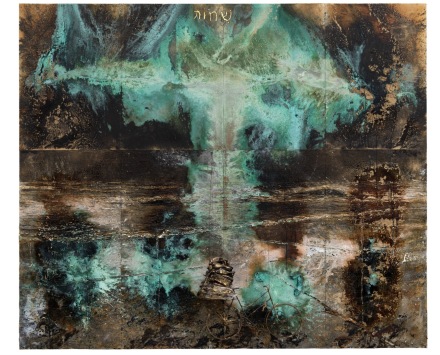 In paintings such as Für E.T.A. HOFFMANN (2021), empty clothing attached to the surfaces stand in for human figures. Another group of paintings combines landscape elements with improvised vehicles—grocery carts, luggage dollies, and bicycles—that function as means of transport between realms. Laden with bundles, these objects recall their contemporary use by those who are displaced from home or seeking one, or by immigrants arriving in a new land, fleeing from war, oppression, and natural disasters. 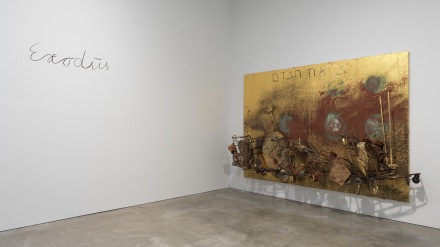 The show marks a continuation of Germany’s haunted past and its challenging relation to the history of the 20th Century. Turning sites from around the German and European landscape into meditations on violence and memory, Kiefer’s work once again showcases why he remains a foundational voice in modern German art.

This entry was posted on Wednesday, November 23rd, 2022 at 8:39 pm and is filed under Art News, Featured Post, Show. You can follow any responses to this entry through the RSS 2.0 feed. You can leave a response, or trackback from your own site.