New York – Betty Woodman: “Conversations on the Shore, Works from the 1990’s” at David Kordansky Through December 17th, 2022 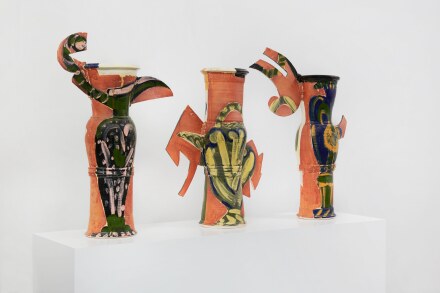 On this month at David Kordansky Gallery’s New York exhibition space, Betty Woodman: Conversations on the Shore, Works from the 1990s, strings together a body of works that underscore the artist’s significant contributions and reinventions of ceramic art during the last decade of the 20th Century. The show, which marks the gallery’s first presentation of the artist’s work in collaboration with the Woodman Family Foundation since announcing the representation of her estate earlier this year, offers a selection of 13 works from a foundational and deeply original period of work. 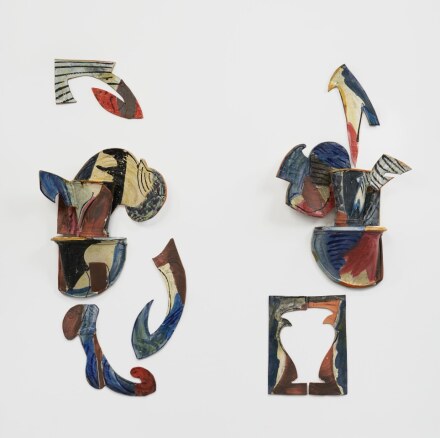 Woodman (1930–2018) is recognized not only as one of the most important artists
to work in ceramics—and one of those most responsible for its inclusion in contemporary art historical discourse—but also as an iconoclastic figure whose advances in several mediums made her a major voice in postwar American art. She transformed the functional history of clay into a point of departure, engaging in bold formal experiments in which she acknowledged the central role of the vessel even as she deconstructed, reassembled, and expanded upon it. 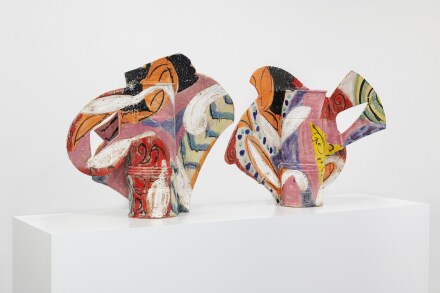 This show underscores Woodman’s work in the medium during an era in which she pushed her craft and the medium into bold new grounds, creating abstracted forms and constellations of material that pushed the material beyond a mere three-dimensional object on a pedestal. The show is anchored by Conversations on the Shore, a major installation from 1994 that has not been exhibited since the late 1990s, when it appeared in a traveling solo show which originated at the Stedelijk Museum in Amsterdam. Featuring floor- and wall-mounted elements, the installation finds Woodman addressing the relationship between negative and positive space with virtuosic aplomb, evoking impressions of architecture, landscape, and the figure while maintaining intense focus on the inherent qualities of her materials. It also telegraphs many of the innovations that would characterize the artist’s later work, which increasingly grew in psychological reach  and formal variation as she began to distinguish less and less between two- and three-dimensional composition.

Juxtaposing her forms and the rich coloration of her inventive glazing against the white wall of the gallery, Woodman would push her works into the framework of painting, while allowing them to exist just beyond it. While the cylindrical vase itself has a restrained and straightforward silhouette, the flat ceramic elements installed around it echo the expressive gestural mark-making that unites the work’s ten components. 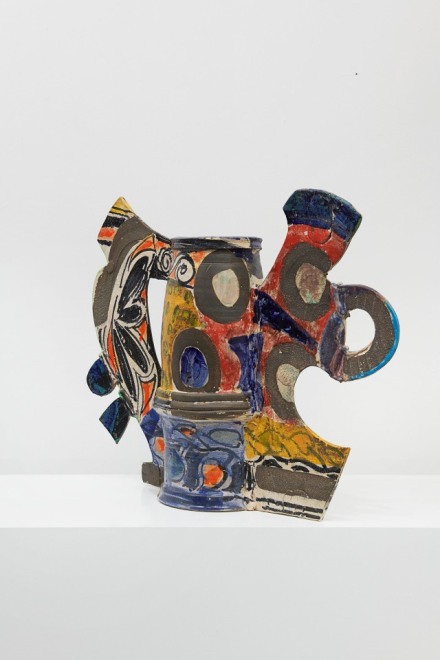 As such, this exhibition allows audiences to grapple with—and revel in—the way that

Woodman’s work can be viewed in light of the broader conceptual currents that
surrounded her at the time, which tended in the direction of video, institutional critique,
and political urgency. Turning the object into a piece of the gallery space, Woodman’s deconstruction of the ceramic serves as a point in which it is liberated from its traditional grounds.

This entry was posted on Friday, November 25th, 2022 at 12:38 pm and is filed under Art News, Featured Post, Show. You can follow any responses to this entry through the RSS 2.0 feed. You can leave a response, or trackback from your own site.