Autumn in the art world, take in the foliage 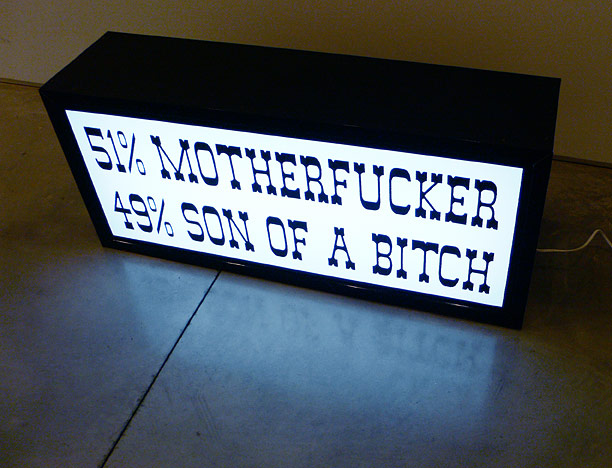 And the races are off! Yesterday evening marked the reawakening of the summertime sonmambulist art world, peacefully resting in New York City throughout the hottest months of summer. 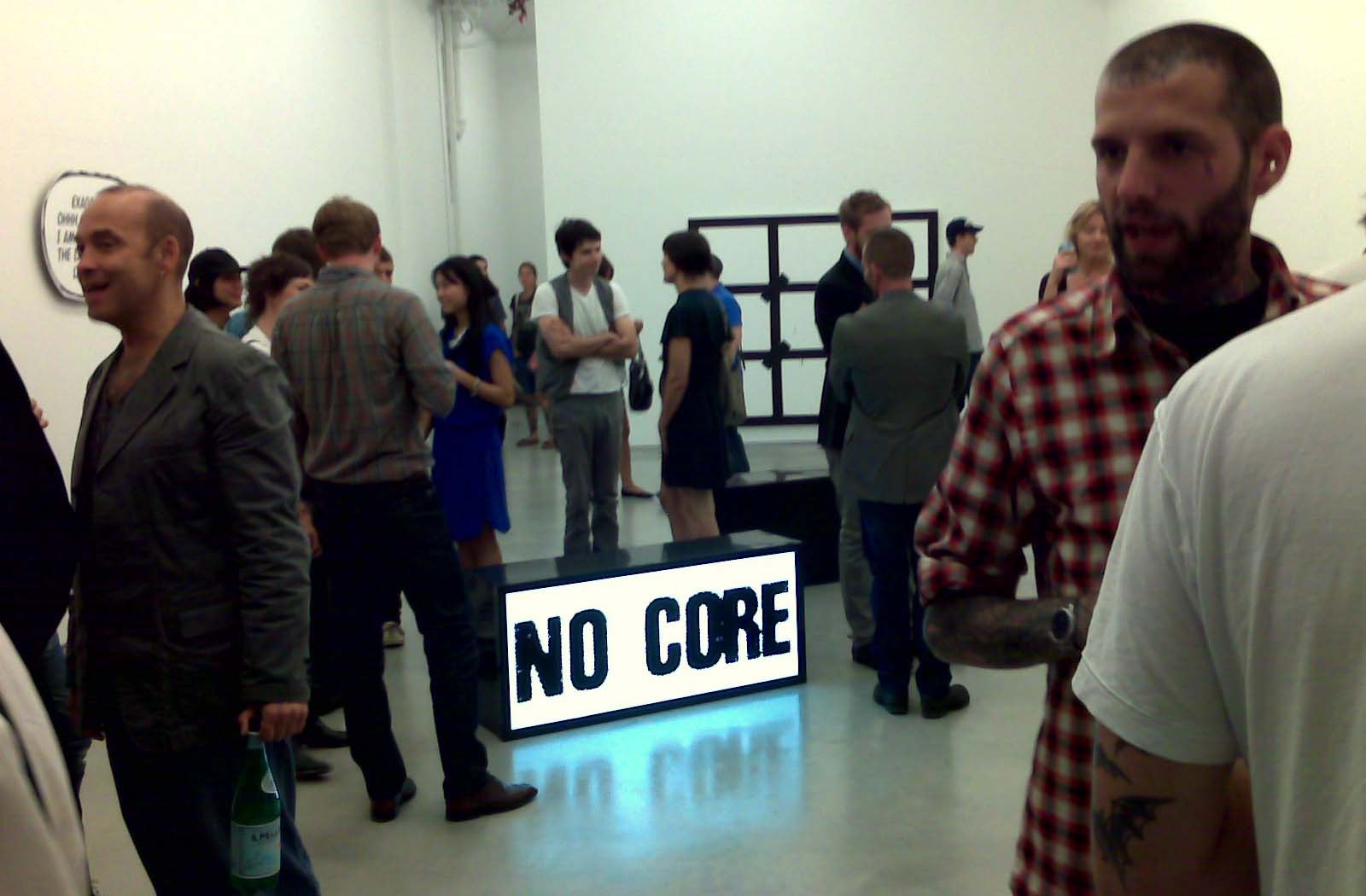 I began the night in the neighborhood, trekking first to Team Gallery to see “Judge,” by Gardar Eide Einarsson. Entering the show I was confronted by a target, a piece of plywood with an subtly absurd floor plan labeled “grounds”, and the cold light of a neon bulb in a box, screaming “51% motherfucker and 49% son of a bitch” and on the other side, “NO CORE” – two sides of the same ineffective dissenter. The work was as obviously political as it was monochromatic. However, the political stance here could be best described as angst – revealing no specific agenda, no insider perspective, no blood, no figures. The first line of the press release reads “The glue that binds Gardar Eide Einarsson’s work together is the manner in which popular culture, in such forms as graphic novels and promotional materials, can act as a conduit for the expression of political positions…creat[ing] a non-didactic environment latent with ambiguity.” Hmmm, well put. The show had the same feeling jargon posted up out of context – a sticker in the subway or a stencil on the sidewalk – more like a mark of someone who had been there rather than evocative of a clear political agenda. 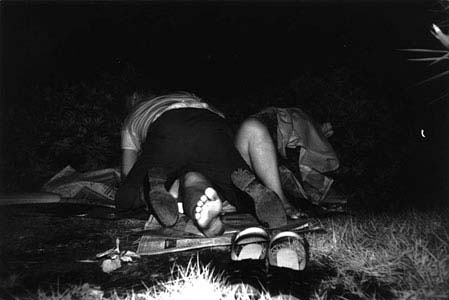 Then, off to Chelsea we went, to be greeted by swarms of the artfully fashionable and the aroma of cheap wine. Yossi Milo Gallery had a show up called “Park” by Japanese photographer Kohei Yoshiyuki. His work catches people fondling, sucking and humping each other in the dark of night, as well as those who watch them in one of Tokyo’s many public parks. It has the sizzle of a make-out scene in the 50s, nothing too graphic in the context of today’s hyper sexualized imagery. But the high waisted panties and the gawky stances heighten the feeling of taboo. 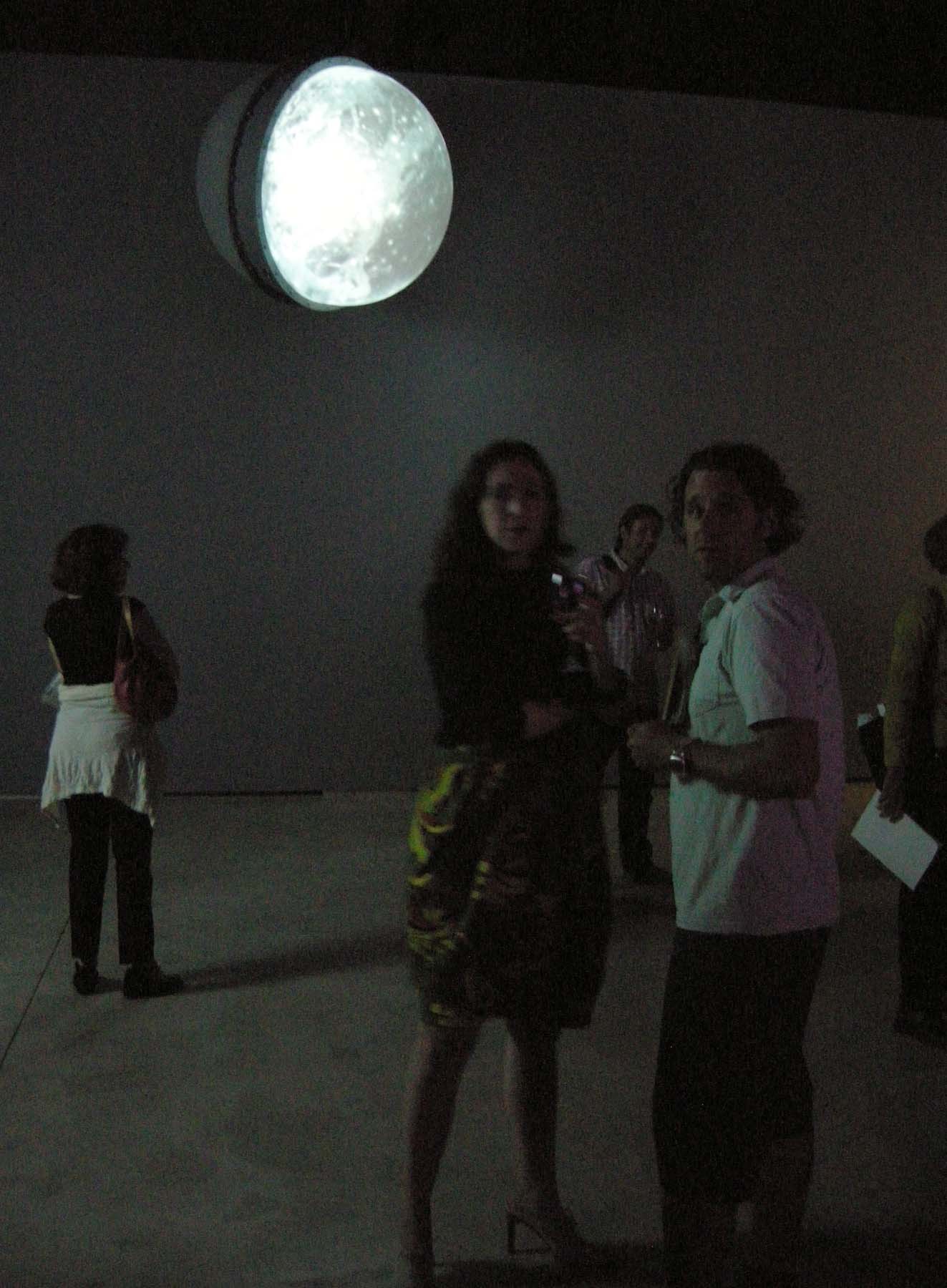 The voyeuristic charm of these photos is enhanced by their night-vision aesthetic and combined with undertones of repressed sexuality. Even the artist himself, with his night vision and infrared film is implicated in this scenario. Voyeurism is a theme in other Japanese artists, such as Noritoshi Hirakawa, but Yoshiyuki has made the throngs of people in the gallery into thrice removed peeping Toms. We were fascinated by the embarrassingly raw, clumsy sexual exploits in the bushes; just as intrigued by watching the act of watching.

Next we traipsed over to Pace Wildenstein, where Robert Whitman‘s show entitled “Turning” featured dramatically hanging videos of planets projected onto banners and orbs, floating near the ceiling. The gallery was not just dim, but nearly pitch black. What was lacking was a bouncer, granting me entry into this darkened nightclub, devoid of music but decorated with planetary disco balls. Or perhaps I should have been alongside my high school astronomy teacher during a typical museum field trip. Enough said. 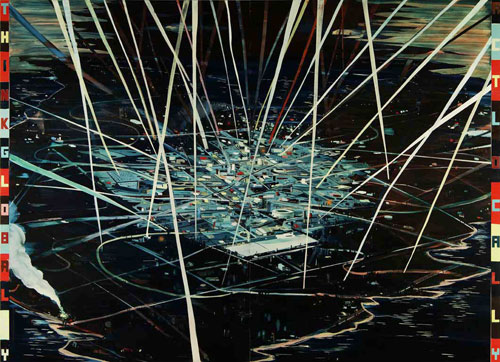 Zach Feuer‘s opening was the most claustrophobic and energetic, filled to the brim with people admiring Jules de Balincourt‘s paintings

in his show entitled “Unknowing Man’s Nature.” Zach Feuer’s The show featured four large and several smaller paintings all alluding tomysterious discontent or an unrealized mistake. The showcase piece most visible when you walked into the door entitled “Think Globally, Act Locally” is the far off concentration of a town or city, light beams shooting outwards into space in all directions. I’ve always been attracted to de Balincourt’s color palette, its not the Day-Glos and forest greens of Ry Fyan nor the country rustic hues of Clare Rojas, but somewhere in between. His crisscrossed hot pink and orange painting called “Unknowing Man’s Nature” surged above the packed crowds, emanating with power even though partially obstructed from view by hipster haircuts. 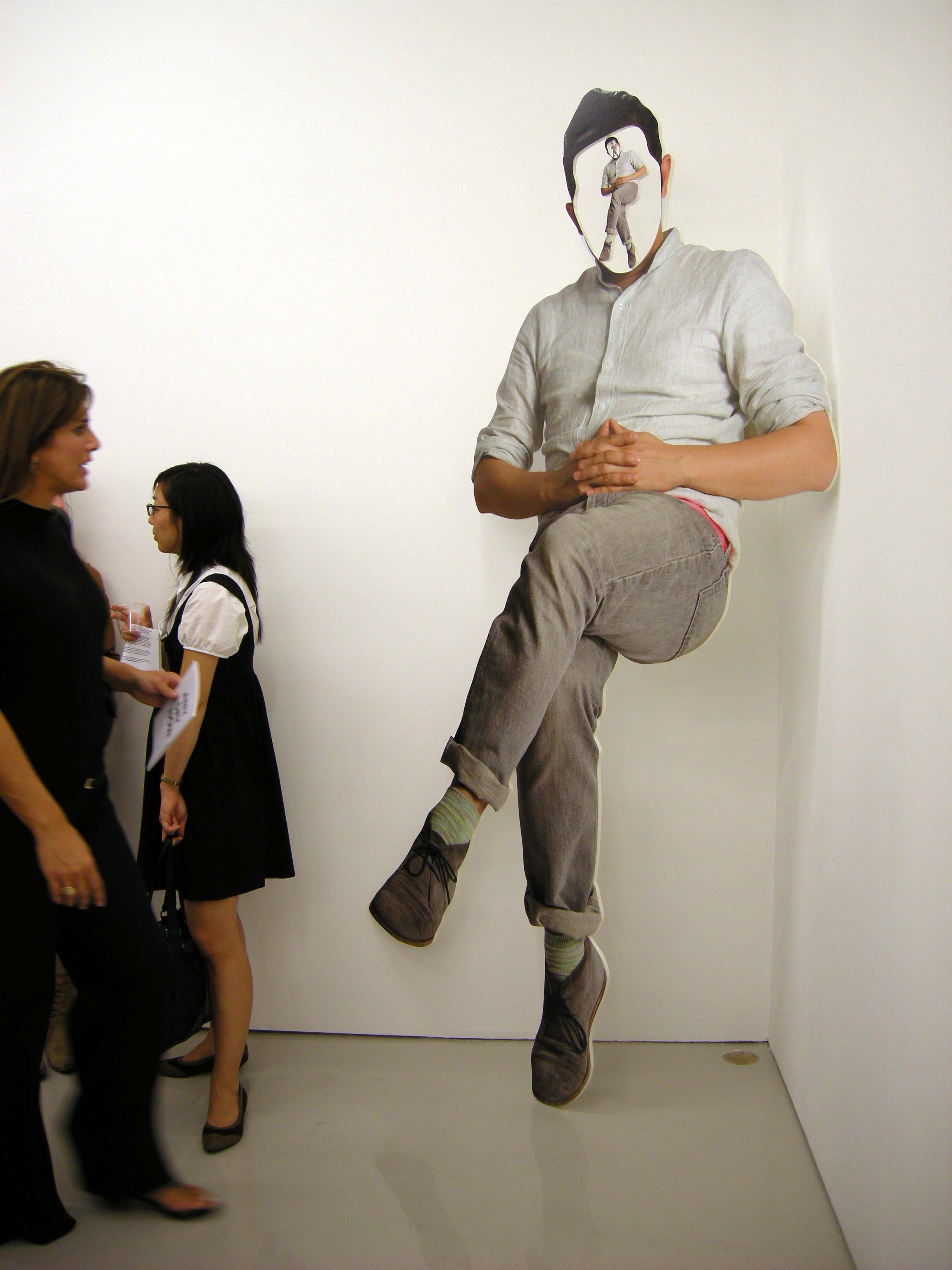 The last stop was Matt Keegan‘s show at D’Amelio Terras. Keegan’s trademark strategy of using cut out portraits from everyday snapshots has now been applied to a variety of materials and scale. His use of negative space to reveal underlying images is akin to John Baldessari’s color block outs. However, by removing, Keegan suggests that something needs to be filled in order to get an instant understanding or that viewing is like an onion, the layers never end. A giant man, legs crossed in quite contemplation with his face cut-out is filled with the same man with his face cut-out and on and on into infinity. With one letter per accordion fold, a large wooden cut-out divides the room into two. The hole formed by each letter framed the space on the other side, as if by looking through the statement, you are forced to see a certain way – not coincidentally the letters spell “GOOD TO SEE YOU”.

This entry was posted on Friday, September 7th, 2007 at 2:46 pm and is filed under Art News. You can follow any responses to this entry through the RSS 2.0 feed. You can leave a response, or trackback from your own site.

One Response to “Autumn in the art world, take in the foliage”