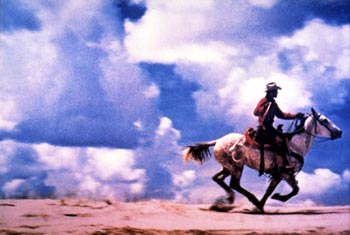 The 30-year retrospective of American artist Richard Prince, Spiritual America, opened this past Thursday to a waning full moon on one of the last hot nights of summer. The show, which is on view until January 9th, 2008 at the Guggenheim New York, includes nearly 160 paintings, photographs, drawings, and sculptures.

Prince’s work, which plays with deception and truth in visual culture, is at once a celebratory gesture towards the unreal and a serious questioning of normative American culture. Beginning in 1977, Price re-photographed advertising images, appropriating quintessential American images and presenting them in a new, critical light. Watches, decorated living rooms, pens, and other objects from advertisements were the subjects of his early ektacolor chrome prints. His work paved the way for many artists of the 80s who also dealt with appropriation, such as Barbara Kruger, Sherrie Levine, and Jeff Koons. 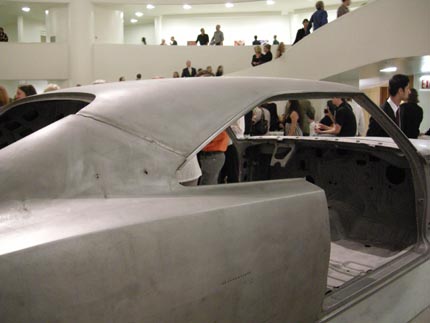 The show, however, begins with Prince’s new work, namely, “American Prayer,” a grandiose sculpture of a classic American muscle car, a 1969 Charger, stripped bare and hung above the floor, supported by a large block, which connects to the car’s roof. The block, unlike the rest of the sculpture, is in a state of near completion, and acts in opposition to the unfinished, once magnificent, now decrepit car that it supports. The piece stands lonely and defiantly in the main gallery of the Guggenheim, the unfinished car frame, a dream of what is to become and simultaneously the debased, empty shell of machine that we all depend on. Prince’s work makes use of the everyday object in a manner reminiscent of Andy Warhol, Jasper Johns, and Duchamp. A postmodern dumpster-diver, Price scavenges the detritus of American culture and reshapes and represents his findings as artworks. 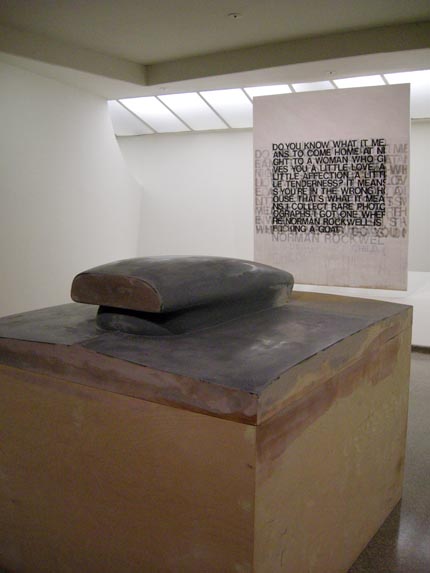 A striking example of Prince’s ability to transform an object, while simultaneously reifying its iconic American value, is his car-hood sculptures. These works, which are taken from Camaros, Mustangs, and Challengers, hang on the wall, painted yet slightly crude. Although three-dimensional, the car-hoods vacillate between their status as sculpture versus that of a painting. The hanging works are pieces dissected from a car, their isolation from their everyday context purports them to the modern American hero version of a classical relief.

Earlier this year, these works faced a serious threat when reports that lightning had struck Prince’s estate in upstate New York, which included “Second House,” an installation that had been gifted by the artist to the Solomon R. Guggenheim Foundation in 2005. Serious damage did occur, but the car-hoods were salvaged. 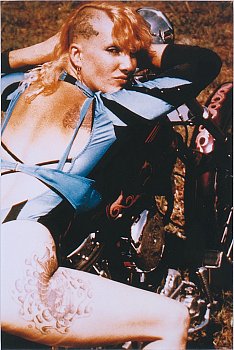 In Prince’s series, Girlfriends (1992) he appropriated a series of photographs from the back pages of biker magazines. Readers would submit photos of their “hot” girlfriends on their bikes, in an eager attempt to display their most prized possessions to the public eye. The amateur quality of the photographs highlights the failed attempt at sex appeal that the scantily clad biker chicks wield defiantly. In their sadly pathetic attempt to resurrect themselves as sex symbols atop motorbike pedestals, they become trophies of their motor head boyfriends. The motorcycle itself is a modern incarnation of the cowboy, at once signifying freedom and individualism. 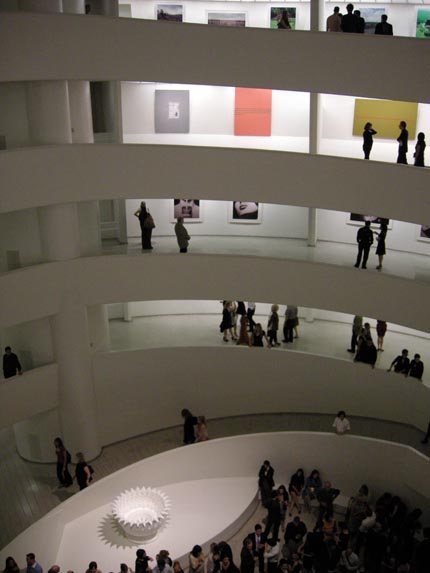 The opening was pleasant and fairly uneventful, the crowd mingled up the rotunda and then scooted back down the elevator for another round of drinks. The Guggenheim arranged the works chronologically twisting upwards, so one must work their way up to the top to see the show. Small gaggles of art-worlders coagulated in the the smaller galleries, air-kissing and chit-chatting as befits an art event. Notables included Prince himself, gallerist Barbara Gladstone, photographers Terry Richardson and Collier Schorr.

In the A section: From creating her own “eSymphony dotcom” to match up single music lovers to caring for heart attack victims in the dark while the music plays, box office manager Florita Davis engages concertgoers on a personal level.

Enrique Arturo Diemecke, music director of the Long Beach Symphony, has been in Southern California for two weeks now, a long stay for the peripatetic maestro.

Saturday night, he will end his sixth season as leader of the LBSO with a concert featuring two works by Beethoven, plus Moncayo’s “Huapango” and the local premiere of American composer Michael Daugherty’s “Fire and Blood.” Last Friday, Diemecke, who is also the music director of the Mexico City Philharmonic, made his conducting debut in Walt Disney Hall, leading a program of music that included composer Stephen Loza’s “America Tropical.” That makes two concerts about walls in just over a week.

Painted walls to be exact. Loza’s “America Tropical” is a musical depiction of the mural “La America Tropical,” painted on the wall of the Italian Hall in Los Angeles’ Olvera Street in 1932 by David Alfaro Siqueiros. The politically charged image, which shows a peasant being crucified on a cross decorated with an American eagle, was controversial and painted over within a year after it was finished. It was rediscovered in the 1960s and is being restored. see here detroit institute of art

Daugherty’s “Fire and Blood,” a three-movement work for violin and orchestra which will feature the LBSO’s principal second violin, Katia Popov, as soloist, is a work inspired by the “Detroit Industry Murals” that Rivera painted in the Detroit Institute of Art in 1932- 1933, and by the lives of Rivera and his wife, Frieda Kahlo.

“Edsel Ford commissioned Rivera to paint murals depicting the Ford production line in Detroit,” Diemecke said in a recent phone conversation. “Rivera was a controversial muralist, a communist who always wanted workers to be big participants in his paintings, in the development of life’s biggest struggles.

“The works he created, which showed the Ford plant, its workers and the complex and fascinating industrial process, was a little insulting to society, and there were some who wanted his works destroyed. But they were preserved and are now amongst the greatest of his works.” (Rivera’s even-more-controversial frescoes for Rockefeller Center in New York were destroyed, chipped out of the wall they were painted in by order of Nelson Rockefeller.) Daugherty’s work, commissioned by the Detroit Symphony, is a powerful violin concerto in three movements. “The piece is in three movements,” Diemecke said, “‘Volcano,’ ‘River Rouge’ and ‘Assembly Line.’ The piece tries to show what the mural does and also traces the life of Frieda Kahlo and Rivera. Katia Popp is a wonderful performer and I think the performance will be fantastic.” Gregorio Luke, former director of the Museum of Latin American Art, will give a brief presentation about the murals. Two works by Beethoven, the “Egmont” overture he created as part of a suite of incidental music for Goethe’s play, and the lively, humorous and beloved Seventh Symphony, will also be on the program.

“Beethoven’s Seventh Symphony is all about dances,” Diemecke said. It was Beethoven’s idea to create an homage to the different kinds of dances that were disappearing from the musical world. It is like a suite of dance rhythms that were slowly being forgotten. In the Seventh, Beethoven uses a big introduction to establish the theme that will be heard throughout the piece, and then uses dance rhythms through the piece to create a framework for the work. Even the second movement, which is a slow-paced work, is not really an adagio. It is more like a funeral dance, an offertorium related to a pavanne. It is a very famous movement. When it was first premiered the audience loved it and forced the orchestra to perform it again.” Mexican composer Moncayo’s lively and popular “Huapango” will open Saturday’s concert. “Huapango” was on the program at last Friday’s Mexico City Symphony concert, and Diemecke has performed the work with the LBSO several times in his six-year tenure. site detroit institute of art

This entry was posted on Friday, September 28th, 2007 at 3:40 pm and is filed under Art News. You can follow any responses to this entry through the RSS 2.0 feed. You can leave a response, or trackback from your own site.