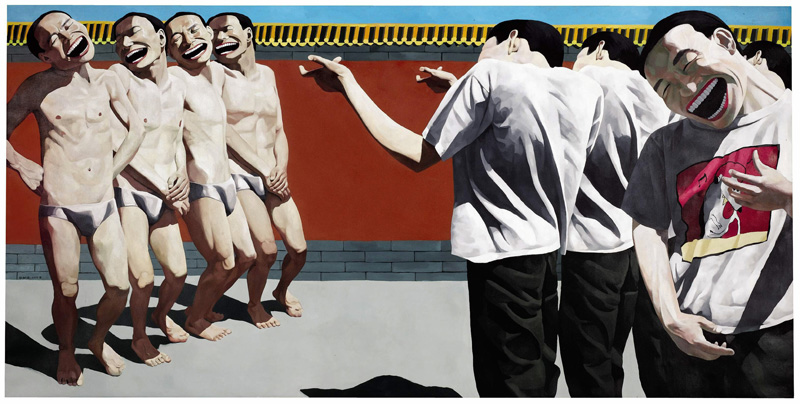 Yue Minjun’s “Execution” sold for £2.93 million (almost $6 million).  Trevor Simon, the previous owner of the painting, paid $52,000 Hong Kong dollars for the piece, or $32,200 in the late 1990’s.  After the purchase, no had seen the painting for nearly 10 years.  Simon spent two-thirds of his junior banker salary on the painting back then because he felt such an emotional connection to the scene. The painting was estimated to sell for a high of $4.1 million, which it well exceeded.  Sotheby’s and Phillips de Pury experienced some Chinese surprises like Yue’s sale as well as Zeng Fanzhi’s “Hospital” tryptich from 1992 which went for over £10.1 million.  The largest Zhang Xiaogang “Bloodline” painting to approach auction sold for $1.19 million at Christie’s.
While these few Chinese artists did exceedingly well this weekend, Western contemporary artists such as Damien Hirst and Jeff Koons went for close to or under their low estimates, while two Basquiats, Warhols and a John Currin weren’t even touched at Christie’s.  Jay Jopling, Hirst’s dealer, bought a statue by the artist for a little over half the low estimate.

Most of the artists who experienced extreme price jumps in the past few years saw a slowing or discontinued interest from collectors in investing in these pieces.
Collector Howard Farber, who sold his pioneering Chinese contemporary collection at Phillips de Pury this weekend said that the Chinese market is just beginning.  “All the naysayers are talking about the bubble and this sale is proving them wrong.”

That could be true but may be a bit of a presumptuous statement.  Several factors are affecting the Chinese market, including a scarcity of quality works and an increase of Chinese buyers.  There is enough Russian and Asian money being spent to balance the loss of Wall Street bonuses, but these buyers tend to be more selective and loyal to their countries.  If Chinese contemporary continues on the path it does, it may see a slight correction in the future, as Western artists are experiencing now.
Reportedly, collector Don Rubell was at Sotheby’s this weekend but didn’t make any purchases.  He said, “I can’t afford it.  And not because of the credit crunch. I’m squeezed by the pound more than the crunch.”

This entry was posted on Monday, October 15th, 2007 at 4:20 pm and is filed under Art News. You can follow any responses to this entry through the RSS 2.0 feed. You can leave a response, or trackback from your own site.