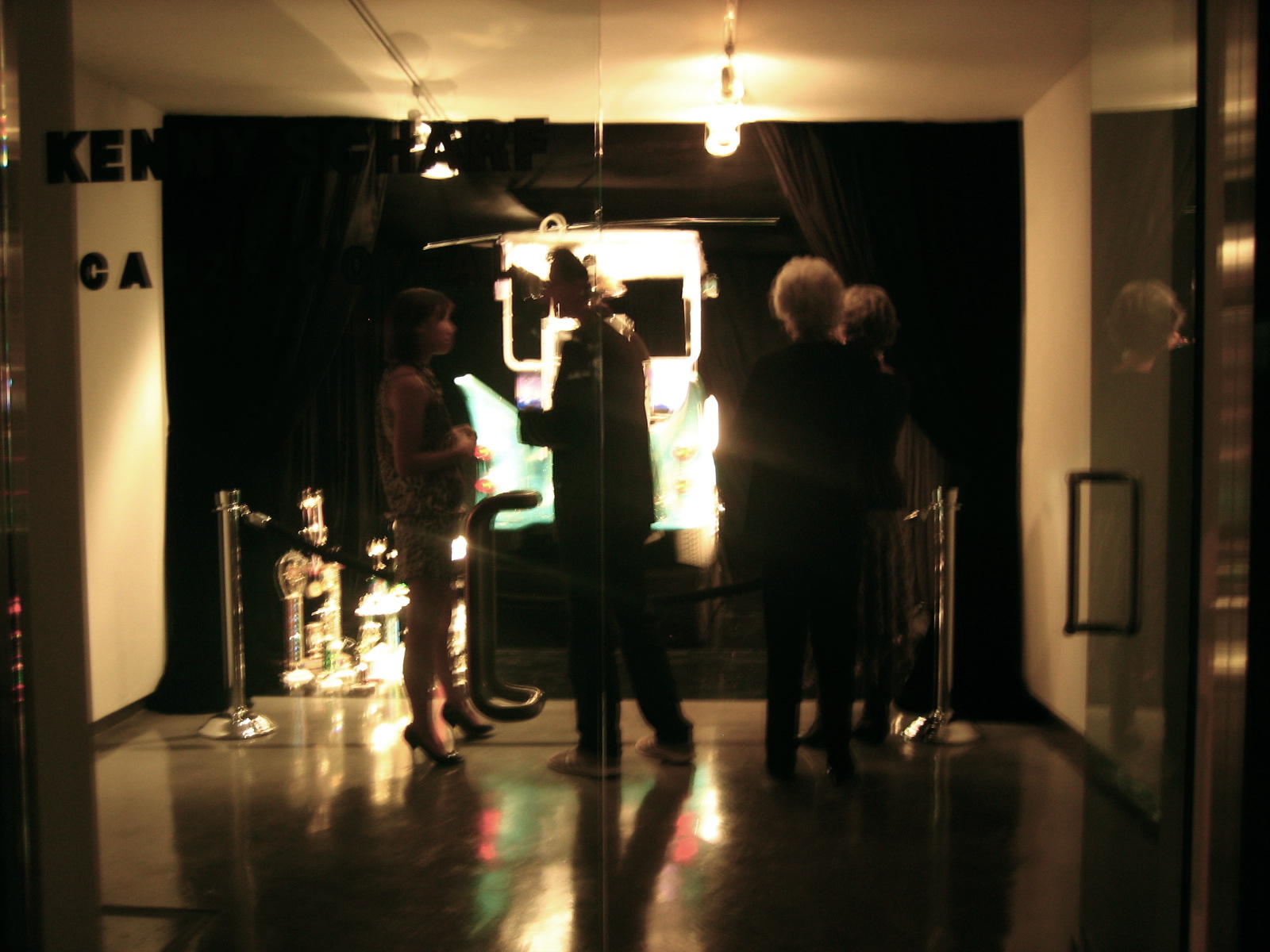 Following his 2005 solo exhibit “Superpop” at Paul Kasmin Gallery, Kenny Scharf presents a series of new paintings in an exhibit called “NEW!”, as well as a customized golf cart called “Carzy Roy-Al”. The golf cart was driven by Scharf earlier this fall at the Deitch Projects Art Parade when he headed the procession as the event’s “King”. It’s currently on view at the project space at 511 West 27th Street, perpetually spinning as if in a car showroom or a “late-night infomercial”, invoking our nation’s endless obsession with consumption and ability to buy even at 3 o’clock in the morning.Cameras were clicking away last night at Paul Kasmin as Scharf, dressed in a suit and sunglasses, posed in front of his paintings and schmoozed with familiar faces. Even Jeff Olson, known for his role of “the cowboy” in the pop group Village People, made an appearance wearing his trademark hat and sporting a moustache.

The centerpiece of the exhibit is the painting “Chocolate Donut in Space“, an 8′ x 8′ realistic oil-on-linen painting of a chocolate frosted donut floating in space. Another stunner is the painting “Chips Galore, aka Chip, Chip, Hooray!, aka Mother Chip, aka Where the Chips May Fall, aka Joy“, featuring a Fifties-era mother pouring a bag of chips down the canvas to the delight of her children, over classic American consumer items, such as Joy dishwasher detergent, a TV set and Velveeta cheese. 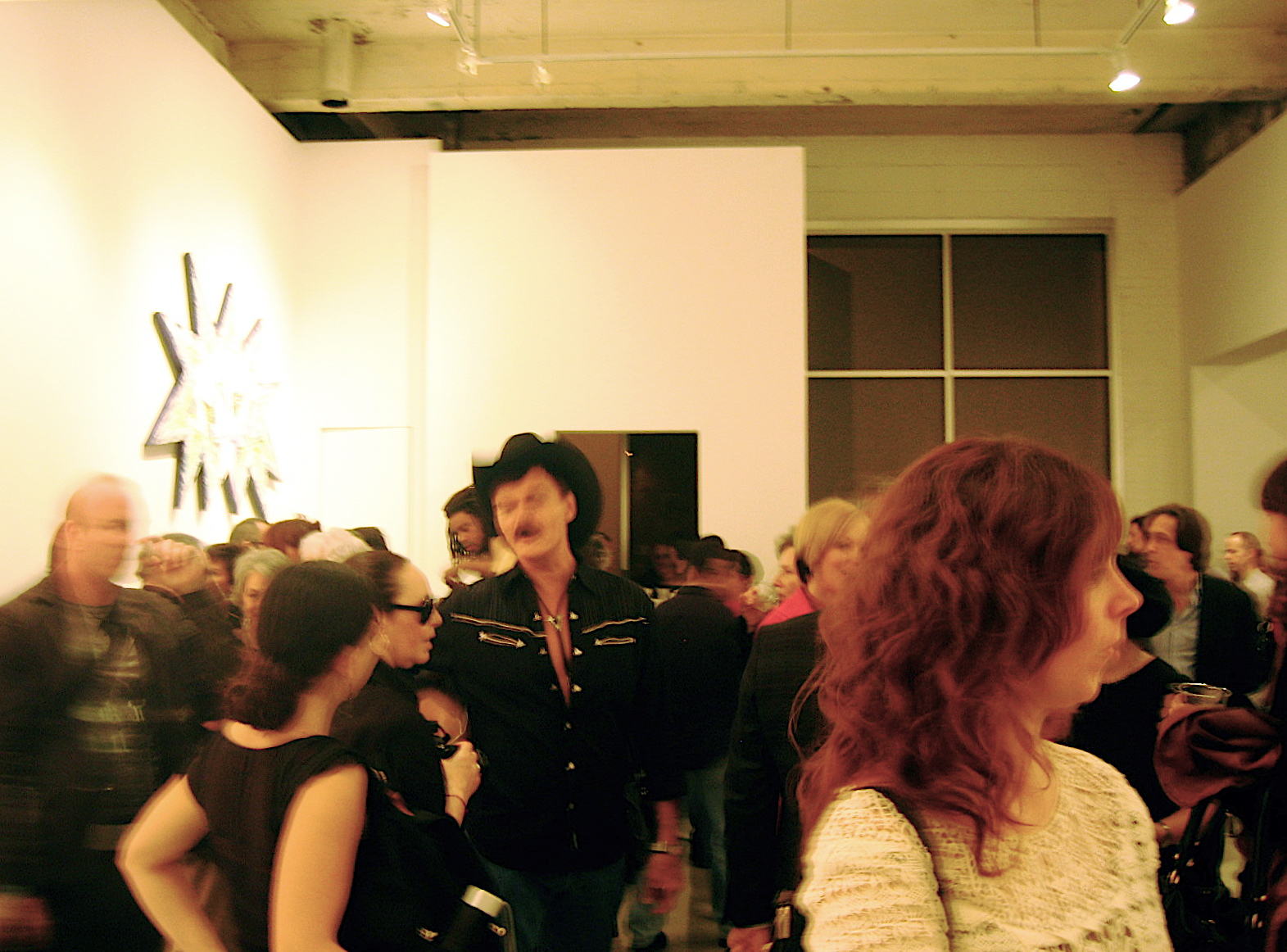 Scharf uses silkscreen, glitter, oil and acrylic paints as well as spray paint to create mixed media paintings that become fantastic, engulfing portals that transport the viewer to a consumerist’s playground. He mixes in bits of text in different languages including Arabic, Hebrew, Russian, Farsi, Chinese, Japanese and Hindi to express how global consumerism is taking over the world.

These “superscapes” become an escape from reality, where we happily consume without thinking of the adverse effects on health and economy, and simultaneously a criticism of how far society will go. Scharf is constantly pushing the limits between fine art and pop culture and his “personal ambition has always been to live the example”. 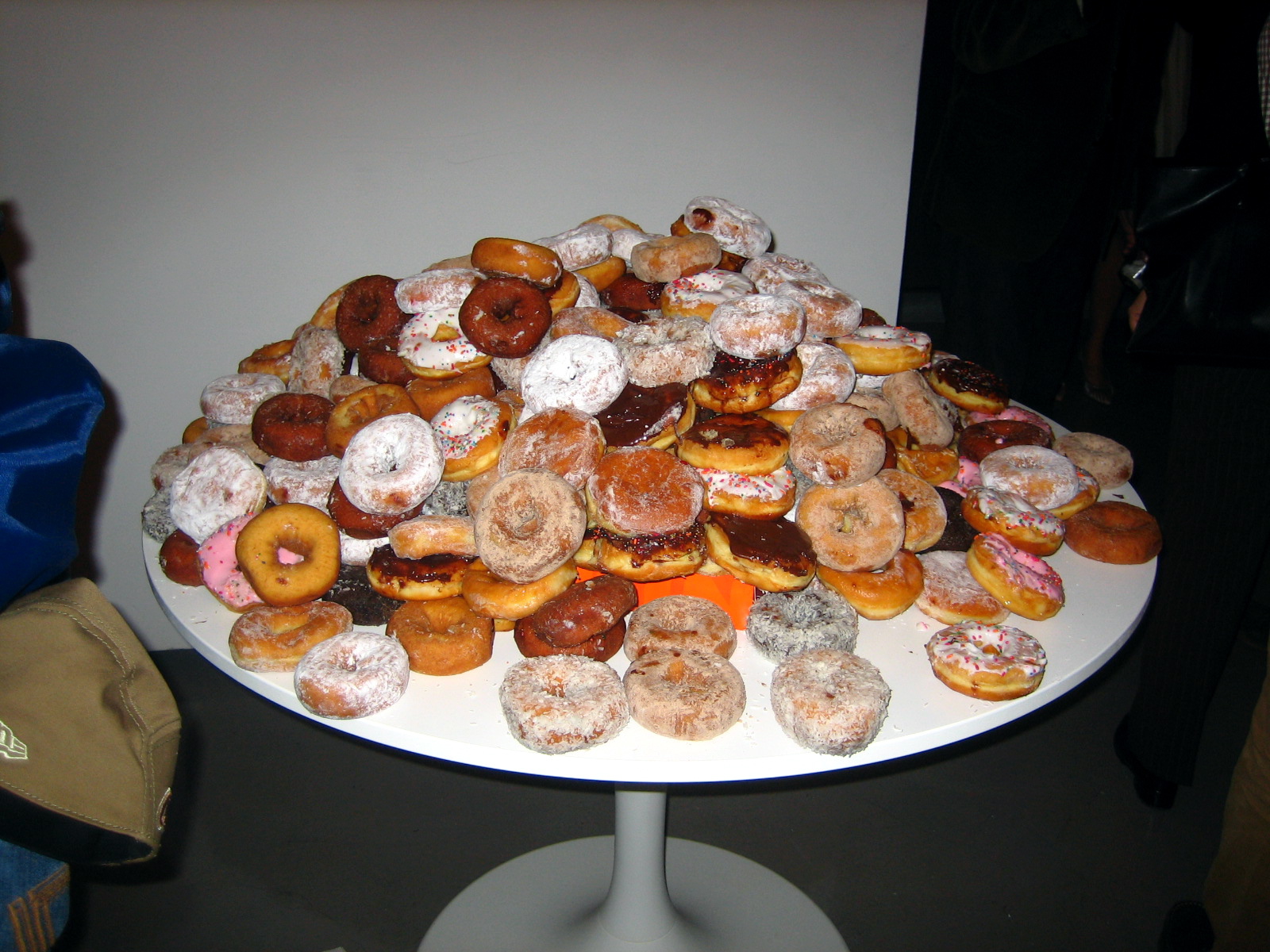 And living the example he did, especially last night. The reception desk was partially blocked by a round table piled with an assortment of donuts to commemorate the painting, and it’s rumored that Scharf will be driving around Chelsea in Carzy Roy-Al every Saturday over the duration of his exhibit handing out free donuts to passerbys.

To counter the sweet, assortment of Wise brand potato chips were stacked in a corner. In true Chelsea fashion, some viewers admired the stack as if it were a installation, and were shocked when a woman opened one up and snacked as she viewed the exhibition. Turns out, the chips were for the taking. –Esther Kim

This entry was posted on Friday, October 19th, 2007 at 3:56 pm and is filed under Art News. You can follow any responses to this entry through the RSS 2.0 feed. You can leave a response, or trackback from your own site.